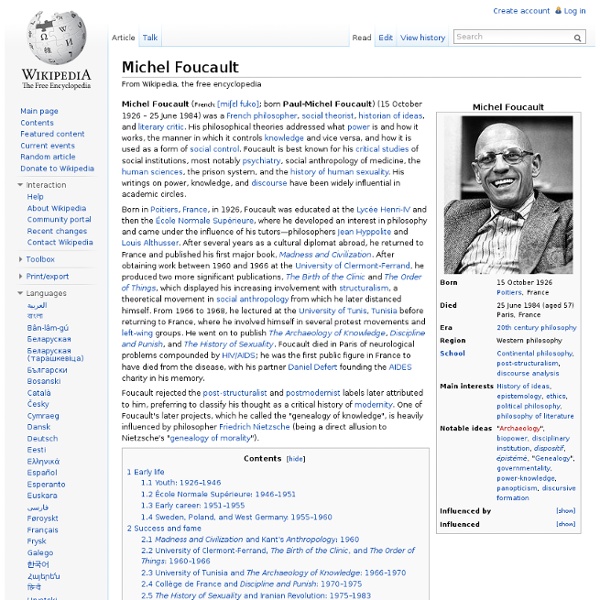 Born in Poitiers, France to an upper-middle-class family, Foucault was educated at the Lycée Henri-IV and then the École Normale Supérieure, where he developed an interest in philosophy and came under the influence of his tutors Jean Hyppolite and Louis Althusser. After several years as a cultural diplomat abroad, he returned to France and published his first major book, The History of Madness. After obtaining work between 1960 and 1966 at the University of Clermont-Ferrand, he produced two more significant publications, The Birth of the Clinic and The Order of Things, which displayed his increasing involvement with structuralism, a theoretical movement in social anthropology from which he later distanced himself. These first three histories were examples of a historiographical technique Foucault was developing which he called "archaeology". Early life[edit] Youth: 1926–1946[edit] "I wasn't always smart, I was actually very stupid in school... École Normale Supérieure: 1946–1951[edit]

Baruch Spinoza Biography[edit] Family and community origins[edit] Spinoza's ancestors were of Sephardic Jewish descent, and were a part of the community of Portuguese Jews that had settled in the city of Amsterdam in the wake of the Alhambra Decree in Spain (1492) and the Portuguese Inquisition (1536), which had resulted in forced conversions and expulsions from the Iberian peninsula.[11] Leo Strauss Leo Strauss (September 20, 1899 – October 18, 1973) was a German–American political philosopher and classicist who specialized in classical political philosophy. He was born in Germany to Jewish parents and later emigrated to the United States. He spent most of his career as a professor of political science at the University of Chicago, where he taught several generations of students and published fifteen books.[1] Early life[edit] Leo Strauss was born in the small town of Kirchhain in Hessen-Nassau, a province of the Kingdom of Prussia (part of the German Empire), on September 20, 1899, to Hugo Strauss and Jennie Strauss, née David.

Greek mythology Oedipus, Attic cup: Oedipus and the SphinxAlbum/Oronoz/SuperStockin Greek mythology, the king of Thebes who unwittingly killed his father and married his mother. Homer related that Oedipus’s wife and mother hanged herself when the truth of their relationship became known, though Oedipus apparently continued to rule at Thebes until his death. Gilles Deleuze Gilles Deleuze (French: [ʒil dəløz]; 18 January 1925 – 4 November 1995) was a French philosopher who, from the early 1960s until his death, wrote influentially on philosophy, literature, film, and fine art. His most popular works were the two volumes of Capitalism and Schizophrenia: Anti-Oedipus (1972) and A Thousand Plateaus (1980), both co-written with Félix Guattari. His metaphysical treatise Difference and Repetition (1968) is considered by many scholars to be his magnum opus.[2] Life[edit] Deleuze was born into a middle-class family in Paris and lived there for most of his life. His initial schooling was undertaken during World War II, during which time he attended the Lycée Carnot.

Sayyid Qutb Sayyid Qutb (Egyptian Arabic pronunciation: [ˈsæjjed ˈʔotˤb], Arabic: [ˈsæjjɪd ˈqʊtˤb]; Arabic: سيد قطب‎; also Said, Syed, Seyyid, Sayid, or Sayed; Koteb, Qutub, Kotb, or Kutb) (9 October 1906 – 29 August 1966) was an Egyptian author, educator, Islamic theorist, poet, and the leading member of the Egyptian Muslim Brotherhood in the 1950s and 1960s. In 1966 he was convicted of plotting the assassination of Egyptian president Gamal Abdel Nasser and was executed by hanging. Author of 24 books, including novels, literary arts critique and works on education, he is best known in the Muslim world for his work on what he believed to be the social and political role of Islam, particularly in his books Social Justice and Ma'alim fi al-Tariq (Milestones). His magnum opus, Fi Zilal al-Quran (In the shade of the Qur'an), is a 30-volume commentary on the Qur'an. Life and public career Early childhood

Timeline of modern history This is a timeline of modern history, here defined as comprising the years since 1901. 20th century[edit] 1910s[edit] 1920s[edit] 1930s[edit] Jacques Ellul Jacques Ellul (French: [ɛlyl]; January 6, 1912 – May 19, 1994) was a French philosopher, law professor, sociologist, lay theologian, and Christian anarchist. Ellul was a longtime Professor of History and the Sociology of Institutions on the Faculty of Law and Economic Sciences at the University of Bordeaux. A prolific writer, he authored 58 books and more than a thousand articles over his lifetime, many of which discussed propaganda, the impact of technology on society, and the interaction between religion and politics. The dominant theme of his work proved to be the threat to human freedom and religion created by modern technology. Among his most influential books are The Technological Society and Propaganda: The Formation of Men's Attitudes.

Vadim Zeeland Vadim Zeland (Rus. Вадим Зеланд) is a contemporary Russian mystic and writer.[1] Transurfing[edit] Background[edit] Little is known about Vadim Zeland. Thai language, alphabet and pronunciation Thai is a Tai-Kadai language spoken by about 65 million people mainly in Thailand (ประเทศไทย), and also in the Midway Islands, Singapore, the UAE and the USA Thai is closely related to Lao, and northern dialects of Thai are more or less mutually intelligible with Lao, particularly the Lao spoken in northern Thailand. Thai vocabulary includes many words from Pali, Sanskrit and Old Khmer. Thai alphabet (ตัวอักษรไทย)