Why Are American Kids So Spoiled? 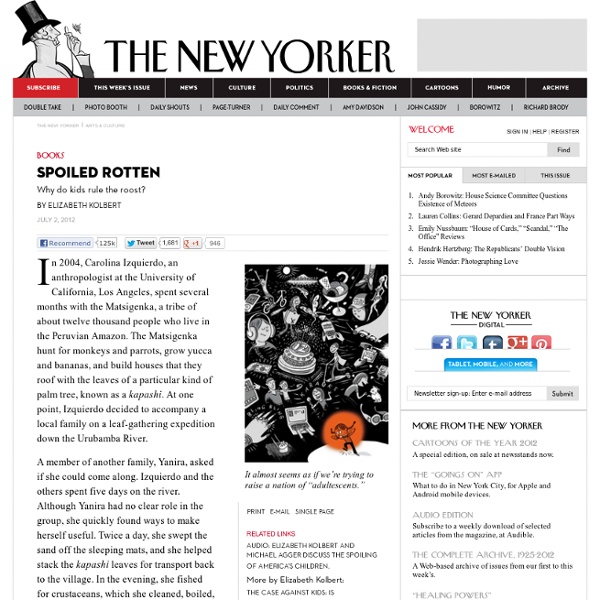 In 2004, Carolina Izquierdo, an anthropologist at the University of California, Los Angeles, spent several months with the Matsigenka, a tribe of about twelve thousand people who live in the Peruvian Amazon. The Matsigenka hunt for monkeys and parrots, grow yucca and bananas, and build houses that they roof with the leaves of a particular kind of palm tree, known as a kapashi. At one point, Izquierdo decided to accompany a local family on a leaf-gathering expedition down the Urubamba River. A member of another family, Yanira, asked if she could come along. While Izquierdo was doing field work among the Matsigenka, she was also involved in an anthropological study closer to home. Izquierdo and Ochs shared an interest in many ethnographic issues, including child rearing. In another representative encounter, an eight-year-old girl sat down at the dining table. In a third episode captured on tape, a boy named Ben was supposed to leave the house with his parents. “Can you untie it?”

How Obama Lost Canada Permitting the construction of the Keystone XL pipeline should have been an easy diplomatic and economic decision for U.S. President Barack Obama. The completed project would have shipped more than 700,000 barrels a day of Albertan oil to refineries in the Gulf Coast, generated tens of thousands of jobs for U.S. workers, and met the needs of refineries in Texas that are desperately seeking oil from Canada, a more reliable supplier than Venezuela or countries in the Middle East. Obama’s choice marked a triumph of campaign posturing over pragmatism and diplomacy, and it brought U.S. Economically, Canada and the United States are joined at the hip. To continue reading, please log in. Don't have an account? Register Register now to get three articles each month. As a subscriber, you get unrestricted access to ForeignAffairs.com. Register for free to continue reading. Registered users get access to three free articles every month. Have an account?

2012: The Year in Graphs As 2012 draws to a close, Wonkblog asked our favorite professional wonks — economists, political scientist, politicians and more — to see what graphs and charts they felt did the best job explaining the past year. Here are their nominees. Sheila Bair — former chairperson, Federal Deposit Insurance Corp. (FDIC) "There has been much discussion about income inequality, but not enough focus on its corollary: debt inequality. Jared Bernstein — senior fellow, Center for Budget and Policy Priorities; former chief economic adviser to Vice President Biden "Here's a simple one I keep thinking and talking about. *This is BLS hourly wage series for so-called production, non-supervisory workers (non-managers in services and blue-collar in manufacturing) deflated by the CPI. Raj Chetty — professor of economics, Harvard; recipient, 2012 MacArthur "Genius" Grant Kent Conrad — Democratic senator from North Dakota; outgoing chair, Senate Budget Committee Douglas Holtz-Eakin — president, American Action Forum

Wall Street Bankers Live Like Normals -- Daily Intelligencer It's been tough times in the financial industry of late. And you might not have known it, but Wall Street bankers are struggling! Why, some of them have even had to make drastic changes to the ways they're accustomed to living. No more private helicopter rides to and from the gym. No more huge expense accounts blown on Beluga caviar and Dom Perignon 1966. (Sevruga caviar and Clos Du Mesnil 1995, maybe.) It's hard to navigate the world of the normals after a life spent among the financial elite. The resulting list from eFinancialCareers, "Twenty money-saving tips from bankers and their wives," is a gem for the ages. Start traveling like a goddamned peasant: Eli Lederman, a former managing director at Morgan Stanley who has reinvented himself as an author, said he’s ditched business class flights. Tell your woman her chore checklist just got longer: Another banker, who used to work at Goldman Sachs and now runs his own business, said he gets his wife to iron his shirts nowadays.

Lisa Belkin: The Benefits Of Spoiling Kids In America For the sake of argument, let's explore the possibility that spoiling our children -- creating "brats" who are very comfortable being waited and doted upon -- is good for them. Hear me out. Then you can protest. Start with the premise that parenting is done in context. What in other species is instinctive -- meerkat parents assigning their pups mentors to teach them foraging skills; rhino mothers rarely leaving their calf's side while nursing; panda mothers abandoning one cub to better care for the the other one -- in humans is subject to timing, and research, and trends. True, we seem to be basically hardwired to care about infants and to respond to their smiles and cries . In this week's New Yorker, Elizabeth Kolbert concludes that the American parenting style of the moment is " Spoiled Rotten " -- which is what her review of a recent spate of parenting books is titled. And then there was the boy who "was supposed to leave the house with his parents. The culture changes.

The US, China, Iran Oil Showdown By Thursday, the State Department will have to decide whether to grant a waiver to China from the Iranian sanctions provisions of the National Defense Authorization Act for Fiscal Year 2012. It appears the State Department is on track to make the wrong decision. The NDAA, as that legislation is called, attempts to reduce Iran’s revenue from the sale of petroleum by imposing sanctions on foreign financial institutions conducting transactions with Iranian financial institutions in connection with those sales. This provision, which essentially cuts off sanctioned institutions from the US financial system, takes effect on June 28th. As the Wall Street Journal notes, these measures are “an attempt to force other countries to choose between buying oil from Iran or being blocked from any dealings with the U.S. economy.” The NDAA gives the president the power to exempt financial institutions from countries that have significantly cut back purchases of Iranian petroleum. Photo Credit: Pete

A Nation of Wimps Maybe it's the cyclist in the park, trim under his sleek metallic blue helmet, cruising along the dirt path... at three miles an hour. On his tricycle. Or perhaps it's today's playground, all-rubber-cushioned surface where kids used to skin their knees. And... wait a minute... those aren't little kids playing. Their mommies—and especially their daddies—are in there with them, coplaying or play-by-play coaching . Few take it half-easy on the perimeter benches, as parents used to do, letting the kids figure things out for themselves. Then there are the sanitizing gels, with which over a third of parents now send their kids to school, according to a recent survey. Consider the teacher new to an upscale suburban town. Behold the wholly sanitized childhood , without skinned knees or the occasional C in history. Messing up, however, even in the playground, is wildly out of style. "Life is planned out for us," says Elise Kramer, a Cornell University junior.

The Boston Marathon Bombing: Keep Calm and Carry On - Bruce Schneier It is easy to feel scared and powerless in the wake of attacks like those at the Boston Marathon. But it also plays into the perpetrators' hands. An explosion erupts near the finish line of the Boston Marathon, one of two explosions in an attack in Boston Monday. (Dan Lampariello/Reuters) As the details about the bombings in Boston unfold, it'd be easy to be scared. It'd be easy to feel powerless and demand that our elected leaders do something—anything—to keep us safe. It'd be easy, but it'd be wrong. It's hard to do, because terrorism is designed precisely to scare people—far out of proportion to its actual danger. But our brains are fooling us. Remember after 9/11 when people predicted we'd see these sorts of attacks every few months? Even the 9/11 terrorists got lucky. If it's hard for us to keep this in perspective, it will be even harder for our leaders. How well this attack succeeds depends much less on what happened in Boston than by our reactions in the coming weeks and months.

E.J. Dionne Jr. for Democracy Journal: Why History Matters to Liberalism Issue #25, Summer 2012 E.J. Dionne Jr. Progressives should ask why conservatives are so eager to paint themselves as the true heirs of the American tradition, and why those on the left side of politics—usually ready to do battle with the right on many fronts—have not felt the same sense of urgency when it comes to popular understandings of the American story. I emphasize the word “popular” because many superb American historians, simply by virtue of their efforts to present the American story accurately, have brought home the flaws in partisan readings of our story even as they challenged the conservative claim to a moral and intellectual monopoly on the meaning of the American idea. But it should not be lost on anyone that it is conservatives who typically carry around copies of our Constitution in their pockets. Yet the right’s interest in the American tradition was not confined to its extremists. For me, Ventura’s piece was an inspiration. The Long Consensus Post a Comment

The 'Busy' Trap Anxiety: We worry. A gallery of contributors count the ways. If you live in America in the 21st century you’ve probably had to listen to a lot of people tell you how busy they are. It’s become the default response when you ask anyone how they’re doing: “Busy!” “So busy.” “Crazy busy.” It’s not as if any of us wants to live like this; it’s something we collectively force one another to do. Notice it isn’t generally people pulling back-to-back shifts in the I.C.U. or commuting by bus to three minimum-wage jobs who tell you how busy they are; what those people are is not busy but tired. Brecht Vandenbroucke Even children are busy now, scheduled down to the half-hour with classes and extracurricular activities. The present hysteria is not a necessary or inevitable condition of life; it’s something we’ve chosen, if only by our acquiescence to it. Our frantic days are really just a hedge against emptiness. I am not busy. Here I am largely unmolested by obligations.

A Final Embrace: The Most Haunting Photograph from Bangladesh Many powerful photographs have been made in the aftermath of the devastating collapse of a garment factory on the outskirts of Dhaka, Bangladesh. But one photo, by Bangladeshi photographer Taslima Akhter, has emerged as the most heart wrenching, capturing an entire country’s grief in a single image. Shahidul Alam, Bangladeshi photographer, writer and founder of Pathshala, the South Asian Institute of Photography, said of the photo: “This image, while deeply disturbing, is also hauntingly beautiful. An embrace in death, its tenderness rises above the rubble to touch us where we are most vulnerable. By making it personal, it refuses to let go. Akhter writes for LightBox about the photograph, which appears in this week’s TIME International alongside an essay by David Von Drehle. I have been asked many questions about the photograph of the couple embracing in the aftermath of the collapse. Every time I look back to this photo, I feel uncomfortable — it haunts me.

Why Do Americans Believe in Muslim Rage? In “The Roots of Muslim Rage,” an essay published in 1990, the historian Bernard Lewis describes a “surge of hatred” rising from the Islamic world that “becomes a rejection of Western civilization as such.” The thesis became influential. It posited a crisis within a global Islamic community that made conflict with the United States and Europe inevitable. But the notion that a generalized Muslim anger about Western ideas could explain violence or politics from Indonesia to Bangladesh, from Iran to Senegal, seemed deficient. A short film on YouTube, called “Innocence of Muslims,” is the cause of the latest outbreak of violence. Crowds have protested since then in several capitals, at times violently. Stevens’s killers apparently belonged to a Salafi or jihadi network that the fragile, newly democratic Libyan government had failed to disarm. Revolutions sometimes consume their pluralists and their democrats.