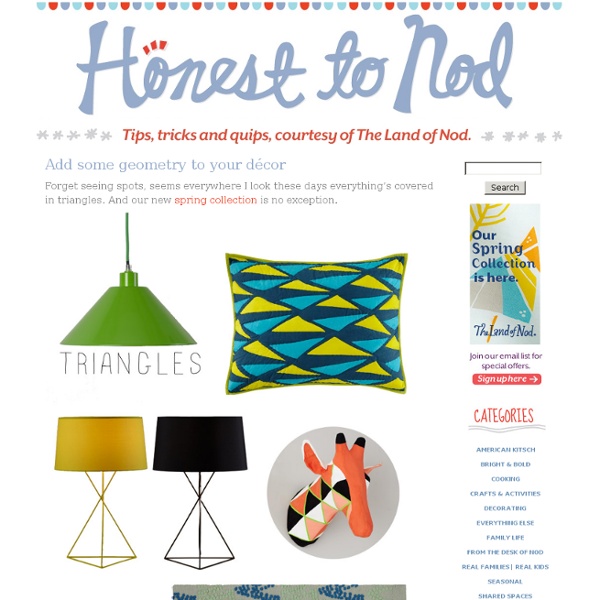 When we found out about the amazing candy making process at Papabubble, we knew we had to make a stop during our first Nod Bus Tour at their location in Pasadena, CA. We were even more excited after we discussed partnering with them to create some exclusive custom candy to hand out on our #nodtourbus stops around California in April. We sat down with Mike from Papabubble LA to find out a little more about their delicious and creative candy. What exactly is Papabubble? We are a handmade candy shop that specializes in hard candy with images or words inside, the perfect candy for weddings, parties and special events. When did Papabubble begin? Papabubble was founded in Barcelona in 2004 with the goal of bringing back the charm of hand crafted sweets. How is Papabubble candy made? Our candy is made from 5 simple ingredients: water, sugar, glucose, flavor and color. After boiling and melting all the ingredients, we pour the molten sugar onto our water cooled table. P.S.

Inspiration : bird tattoos + DIY temporary tattoos I've been having a love affair with bird motifs since many years now, so my heart skipped a beat when I saw a flock of birds' tattoo for the first time. I've been collecting them since then. I know bird tattoos are currently super trendy, but I love them anyway! As far as I'm concerned, I'm not ready for a tattoo (I have a VERY low tolerance to pain), so as an alternative, I opted for temporary transfer tattoos! Yes, just like those we found as inserts in bubble gums when we were kids. You need : 1. 2. 3. 1. 2. 3. It can last up to 7 days, but mine started cracking after 4 days, so I dissolved it with baby oil. I felt like a little girl, and it was super fun!

Oh Happy Day! DIY Washi Tape Laptop Keyboard Look whose little old MacBook got a facelift this weekend! I spotted this idea from minifanfan on Making It Lovely last week and just had to give it my own spin. I purchased my Japanese washi tape from Le Box Boutique on Etsy. There are hundreds of washi tape sellers but I chose Le Box because they allow you to purchase tape by the foot rather than having to purchase the entire roll. They were very easy to interact with and I would definitely recommend them if you’re looking to purchase washi tape! I chose these ten patterns but only ended up using eight of them on my keyboard. I first thoroughly cleaned my keyboard with rubbing alcohol to remove any dirt or oil that might keep the tape from sticking. I originally wanted to do all the keys, including the small keys in the top row, but the tape seemed to have a harder time sticking to the small keys. This project was a bit tedious but simple – perfect for a few hours in front of the tv. What do you think? Tagged as: craft, diy, tutorial

Honestly WTF Glowing jar project - varázslat a lakásban (EN/HU) Thank you for being here and looking at this old-old tutorial of mine! A lot has changed on this blog lately, why don't you go check it out after you learnt how to make your own jars? For one, the blog is now written in english/hungarian entirely, can't wait to see what you think about other things on from panka with love! :) Also, if you want to have this image for your home, feel free to visit my etsy shop, where you can download a cool, hi-res version of it, huzzah! Since the above image is one of my 'most famous' photos, I've got a lot of requests on how I made these glowing jars. A fölső kép miatt (ami az egyik legismertebb képem) elég sok kérést kapok, hogy csináljak egy lépésről lépésre segítséget a befőttes üvegeimhez. In general about this project / Általában erről a projectről: I have a lot of mason jars. Rengeteg befőttes üvegem van, kicsik is, nagyok is, de úgy látom, hogy a nagyobbak jobb választásnak tűnnek ehhez a projecthez: azok aztán nagyon szépek és mágikusak lesznek!

You Are My Fave The BEST Play-Dough Recipe Have you ever made play dough and it just fell apart?? Well… not this time. This recipe will make play dough that is seriously the closest thing to store-bought you’ll ever make. No falling apart or drying out (as long as stored in a sealed container). It will last up to 6 months.The secret to this recipe?? Ready to make it? Ingredients: 1 C Flour 1 C Water 1/4 C Salt 1 TBSP Vegetable Oil 2 tsp Cream of Tarter Food Coloring (actual coloring or a kool-aid packet will do) Sparkles (If you wanna be a fun mom!) Pour in all ingredients. Stir until everything is mixed well. Once the mixture is (mostly) clump free. Stir. Stir, Stir Stir.Just keep stirring until the Play Dough is formed. Remove from heat, and knead by hand. Once cooled it’s ready to go. Or grab your cookie cutters, plastic scissors, rolling pin, etc.. and let your toddler go to town. What a fun thing to do on a rainy day! # kristanlynn xoxo I’ve linked up here, here, here and here UPDATE- answering your questions: