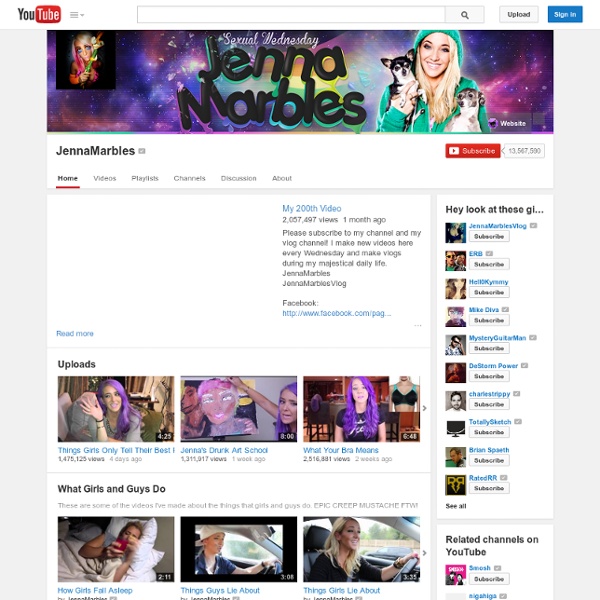 Upload Website Subscription preferences Loading... Working... JennaMarbles My 200th Video 2,057,497 views 1 month ago Please subscribe to my channel and my vlog channel! Read more Uploads Play What Girls and Guys Do These are some of the videos I've made about the things that girls and guys do. Popular uploads Makeup Videos These are videos that include the makeey uppy Created playlists Hey look at these giraffes JennaMarblesVlog ERB Hell0Kymmy Mike Diva MysteryGuitarMan DeStorm Power charlestrippy TotallySketch Brian Spaeth RatedRR See all Related channels on YouTube Smosh nigahiga RayWilliamJohnson TheFineBros CollegeHumor Shane Dawson TV Sign in to add this to Watch Later Add to

TEDxTalks Musician Scott Mescudi, aka Kid Cudi, returns to his high school to talk about growing up and his career path in the music industry. Born Scott Ramon Seguro Mescudi in Cleveland, Kid Cudi began rapping while attending Shaker Heights High School and later Solon High School. In 2004, Kid Cudi moved to Brooklyn, NY to pursue his rap career. TeamFourStar's channel Dragonball Z Abridged Parody follows the adventures of Goku, Gohan, Krillin, Piccolo, Vegeta and the rest of the Z Warriors as they gather Dragonballs and fight intergalactic evil. With the comedic writings of Lanipator, Takahata101, and KaiserNeko this may not be the DBZ you remember but TFS hopes you enjoy it all the same. How high can the Krillin Owned Count get? Who will be the next to go Super Saiyan? Can Vegeta's ego get any bigger? Find out NOW on DBZ Abridged!

Welcome to The Gradual Report Thanks for the good times 350K + and growing! instagram: : Store: Poonaple at gmail.com SUBSCRIBE NEW SHOWS EVERY MONDAY and FRIDAY What is the gradualreport? The gradualreport is a human experiment in comedy focusing on; human interactions, human phobias, animal news, giant world events, and scientific non-achievement. These things are distilled through the mind of a weird, smart, eccentric young man named Danny Grozdich and funny is the result. DemonAsylum Upload Subscription preferences Loading... Working... Charlie Parra del Riego Upload My music and albums!!! Subscription preferences

Big Think There are only two events in the universe that defy the laws of physics: black holes and the big bang, and while scientists try to explain them, crucial evidence may be eaten up in the meantime. Christophe Galfard's book is "The Universe in Your Hand A Journey Through Space, Time, and Beyond" ( Read more at BigThink.com: Follow Big Think here:YouTube: Transcript - The interesting thing about trying to unravel the laws of nature is that yes, we have found some laws.