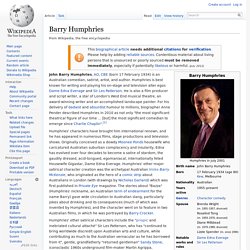 Humphries is best known for writing and playing his on-stage and television alter egos Dame Edna Everage and Sir Les Patterson. He is also a film producer and script writer, a star of London's West End musical theatre, an award-winning writer and an accomplished landscape painter. For his delivery of dadaist and absurdist humour to millions, biographer Anne Pender described Humphries in 2010 as not only "the most significant theatrical figure of our time … [but] the most significant comedian to emerge since Charlie Chaplin".[1] Humphries' characters have brought him international renown, and he has appeared in numerous films, stage productions and television shows. Early childhood[edit] Disguising myself as different characters and I had a whole box of dressing up clothes ... Education[edit] Humphries was legendary for his provocative public pranks. Perth Reenacting Club. Battle of Vitoria 2013 - The Battle. 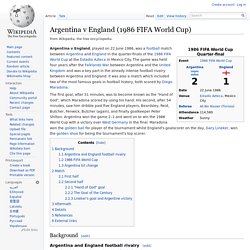 The game was held four years after the Falklands War between Argentina and the United Kingdom and was a key part in the already intense football rivalry between Argentina and England. It was also a match which included two of the most famous goals in football history, both scored by Diego Maradona. The first goal, after 51 minutes, was to become known as the "Hand of God", which Maradona scored by using his hand. His second, after 54 minutes, saw him dribble past five England players, Beardsley, Reid, Butcher, Fenwick, Butcher (again), and finally goalkeeper Peter Shilton. Argentina won the game 2–1 and went on to win the 1986 World Cup with a victory over West Germany in the final. 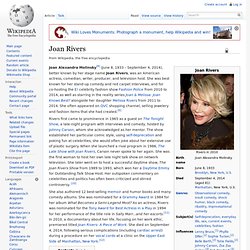 She was best known for her stand-up comedy and red carpet interviews, and for co-hosting the E! Celebrity fashion show Fashion Police from 2010 to 2014, as well as starring in the reality series Joan & Melissa: Joan Knows Best? Alongside her daughter Melissa Rivers from 2011 to 2014. She often appeared on QVC shopping channel, selling jewelery and fashion items that she had created.[9] She also authored 12 best-selling memoir and humor books and many comedy albums. Early life Rivers was born in Brooklyn, New York,[13][14][15] the daughter of Russian Jewish immigrants Beatrice (née Grushman; January 6, 1906 – October 1975) and Meyer C. Career Jim Connell, Jake Holmes and Joan Rivers when they worked as the team "Jim, Jake & Joan" 1950s–1960s 1970s. Yputube the Charlestown dance. Bellevue Inside Out. Watch?v=ErooOhzE268&feature=youtu. Multiple Personality Disorder Documentary. Amy Winehouse (Full) Live At BBC Sessions 2007. 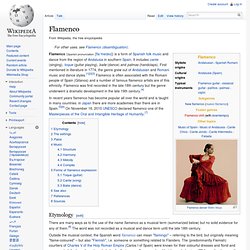 It includes cante (singing), toque (guitar playing), baile (dance) and palmas (handclaps). First mentioned in literature in 1774, the genre grew out of Andalusian and Romani music and dance styles.[1][2][3] Flamenco is often associated with the Romani people of Spain (Gitanos) and a number of famous flamenco artists are of this ethnicity. Flamenco was first recorded in the late 18th century but the genre underwent a dramatic development in the late 19th century.[4] In recent years flamenco has become popular all over the world and is taught in many countries: in Japan there are more academies than there are in Spain.[5][6] On November 16, 2010 UNESCO declared flamenco one of the Masterpieces of the Oral and Intangible Heritage of Humanity.[7] Etymology[edit] The settings[edit] Corral de la Morería, Madrid.