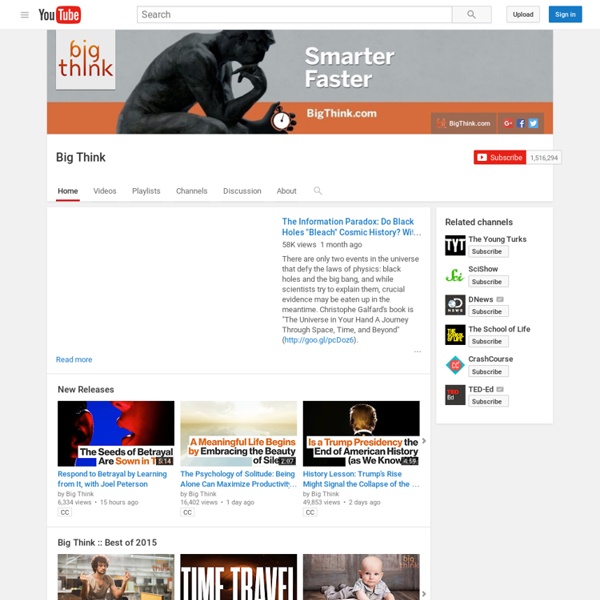 There are only two events in the universe that defy the laws of physics: black holes and the big bang, and while scientists try to explain them, crucial evidence may be eaten up in the meantime. Christophe Galfard's book is "The Universe in Your Hand A Journey Through Space, Time, and Beyond" ( Read more at BigThink.com: Follow Big Think here:YouTube: Transcript - The interesting thing about trying to unravel the laws of nature is that yes, we have found some laws. We understand gravity to some extent. For a long time gravity has told us that nothing can escape the gravitational grip of a black hole. And everything we had known about black holes until the mid-1970s was only related to gravity.

249 Bloom's Taxonomy Verbs For Critical Thinking Bloom’s Taxonomy’s verbs–also know as power verbs or thinking verbs–are extraordinarily powerful instructional planning tools. In fact, next to the concept of backwards-design and power standards, they are likely the most useful tool a teacher-as-learning-designer has access to. Why? They can be used for curriculum mapping, assessment design, lesson planning, personalizing and differentiating learning, and almost any other “thing” a teacher–or student–has to do. For example, if a standard asks students to infer and demonstrate an author’s position using evidence from the text, there’s a lot built into that kind of task.

(1) The CGBros Welcome to TheCGBros and thanks for tuning in to our channel! Our mission is to bring you HD-quality professional content, insights and digital inspiration from around the world. You'll find only the best and latest in Digital Art creation including VFX, 3D Animation, Student and Independent Short Films, Motion Graphics Design, Behind The Scenes/Breakdowns, 3D Software Tutorials, and much much more... Get plugged in to what other artists are doing today, and get a glimpse of what's coming in the future.

C.G.P. Grey's channel How do all the algorithms around us learn to do their jobs?**OMG PLUSHIE BOTS!!**: Futures Research Methodology Version 3.0 Editors: Jerome C. Glenn and Theodore J. Gordon The series begins with an introductory chapter to futures research and concludes with a synthesis of methods and speculation about the future of futures research methods. The other 37 chapters cover one specific method (e.g. Futures Wheel, Scenarios) or category of methods (e.g.

Spooky Quantum Action Might Hold the Universe Together Brian Swingle was a graduate student studying the physics of matter at the Massachusetts Institute of Technology when he decided to take a few classes in string theory to round out his education—“because, why not?” he recalled—although he initially paid little heed to the concepts he encountered in those classes. But as he delved deeper, he began to see unexpected similarities between his own work, in which he used so-called tensor networks to predict the properties of exotic materials, and string theory’s approach to black-hole physics and quantum gravity. “I realized there was something profound going on,” he said. Tensors crop up all over physics—they’re simply mathematical objects that can represent multiple numbers at the same time. For example, a velocity vector is a simple tensor: It captures values for both the speed and the direction of motion.

Physics Simulations at The Physics Classroom Welcome to Physics Interactives! This section of our website features a collection of HTML5 interactive pages that allow a user to explore a physics concept. Some Interactives are simulations that allow a user to manipulate an environment and observe the effect of changes in variables upon the simulation. MONSTERS (EN ESPAÑOL) - James Blunt Oh, before they turn off all the lightsI won't read you your wrongs or your rightsThe time has gone I'll tell you goodnight, close the doorTell you I love you once moreThe time has goneSo here it is I'm not your son, you're not my fatherWe're just two grown men saying goodbyeNo need to forgive, no need to forgetI know your mistakes and you know mine And while you're sleeping I'll try to make you proudSo, daddy, won't you just close your eyes?Don't be afraid, it's my turnTo chase the monsters away Oh, well I'll read a story to youOnly difference is this one is trueThe time has gone

Four Fundamental Myths Derailing Academic Change When we think about Benjamin Franklin, we instantly think of the author, scientist, inventor, diplomat who signed the U.S. Declaration of Independence and has his face on the one-hundred dollar bill. Ben Franklin was a truly remarkable person, yet he had less than two years of formal education. The Golden Age Of Quantum Computing Is Upon Us (Once We Solve These Tiny Problems) Quantum computing is not easy. Researchers at IBM recently announced that they had taken a step toward solving one of its biggest challenges: developing a better way to detect and correct annoying errors. In a blog post, Mark Ritter, who oversees scientists and engineers at IBM’s T.J.