How to Boost Your YouTube Visibility Social Media Examiner. Do you have a YouTube channel for your business? 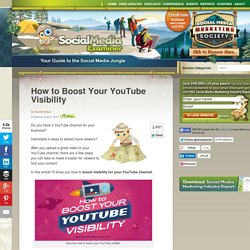 Interested in ways to attract more viewers? After you upload a great video to your YouTube channel, there are a few steps you can take to make it easier for viewers to find your content. In this article I’ll show you how to boost visibility for your YouTube channel. Discover how to boost your YouTube visibility. #1: Optimize Your Channel To give your videos the best chance of getting discovered via YouTube search, start by optimizing your channel. The strength and authority of your channel (the number of channel views, video views, subscribers, etc.) are important signals for YouTube’s search rankings. Choose a Short, Descriptive Channel Name Your channel title should briefly tell the world what your channel is about. Include Relevant Keywords in the Description The YouTube Playbook uses Vice’s channel as an example of a great description.

Promotional Tools. Steve Jobs' 2005 Stanford Commencement Address. PSY Gangnam Style Youtube Success. Sometime in life there are moments when people are super lucky, moments that shock the entire globe of viewers in certain circuits of people, and moments that you just have to give it up for unique individuals who have worked their tail end off to make it happen. 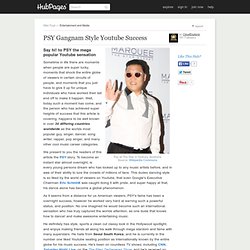 Well, today such a moment has come, and the person who has achieved super heights of success that this article is covering, happens to be well known in over 30 differing countries worldwide as the worlds most popular guy, singer, dancer, song writer, rapper, pop singer, and many other cool music career categories. We present to you the readers of this article the PSY story. To become an instant star almost overnight, is every young persons dream who has looked up to any music artists before, and in awe of their ability to lure the crowds of millions of fans.

Microsoft CEO Summit Innovation in Education. YouTube's Payout Was Revealed! As you surely know, YouTube is the most popular online video service that allows you to upload, share and comment movies using a simple website. 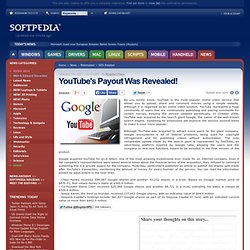 Although it is regarded as an online video solution, YouTube represents a huge community of users that are continuously publishing and placing comments for certain movies, keeping the service updated periodically. In October 2006, YouTube was acquired by the search giant Google, the owner of the well-known search engine, sustaining its employees will improve the service several times to make it even more popular. Although YouTube was acquired to attract more users to the giant company, Google encountered a lot of federal problems, being sued for copyright infringement and for publishing videos without authorization. Google acquired YouTube for $1.6 billion, one of the most amazing investments ever made for an Internet company.

Carlos Slim. PubTalk: Phillip Martin shares his AdSense story. Machinima. CNN: Google award to Khan Academy. Gangnam Style Reaction Videos. On the news The Gangnam Style music craze has shocked the entire online world, as the crowds of Youtube fans are making their own videos now to share in the action of this new Korean Kpop phenomenon & like its going out of style. 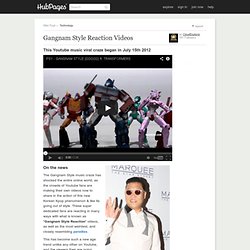 These super dedicated fans are reacting in many ways with what is known as "Gangnam Style Reaction" videos, as well as the most weirdest, and closely resembling parodies. This has become such a new age trend unlike any other on Youtube, and the viewers their are going crazy, because when you come to think of it, why not?

These viewers do indeed make and have made Youtube what it is today, and even the CEO of Google was dancing in a cool video with the owner of the awesome original video there. His name is PSY, and he's a online super power now in his own right plus on the ground he's considered to be the most famous of them all today. Looking for the historical location PSY's success began (map below) Map DataMap data ©2014 Google, SK planet Map Data Map. Forbes Talks To The Richest Person In The World. Gangnam Style parodies and copycats. Getting tired yet? 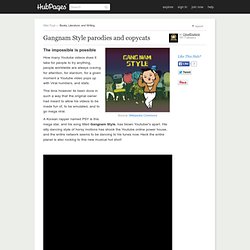 After hearing the same song and watching the same videos day in and day out, after a while your eyes might wanna pop out, and your ears may fall off, but this song here seems to never get dry, the dance never fades for some odd reason, and the best thing is it all just got started. I think even the Pope himself, and the Dali Lama danced to this awesome song that PSY created. Man oh man I need to make a parody myself so I can join in on the potential viral action, but I think it shall be a fail for sure, because I don't have a lick of comedic expression in me to save my life.

If I did, well I would be doing what our cool new friend PSY has done creating the most insane worldwide musical phenomenon ever known to man. Its safe to say that he's a genius, and I'm just a little ole rocket scientist type trying to earn a slow buck typing up a storm all day and night, because all other systems have failed me LMFAO. Love is in the air.