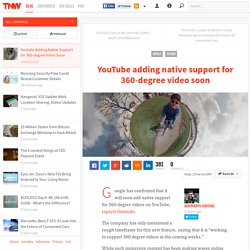 The company has only mentioned a rough timeframe for this new feature, saying that it is “working to support 360 degree videos in the coming weeks.” While such immersive content has been making waves online already, it hasn’t yet been available on a mainstream service like YouTube. Giroptic, makers of what it claims to be the world’s first 360-degree full HD camera, told The Verge that its 360cam will be the first of its kind to be supported natively by YouTube.

The French camera maker also said that Google will also allow 360cam users to map real-world locations by uploading videos to Street View. YouTube for Android gets Material Design Makeover. The Material Design makeovers of Google’s apps have been slowly rolling in and today’s big update is YouTube. 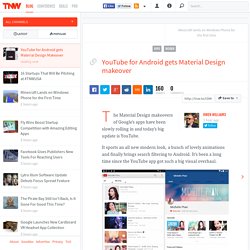 Women rule YouTube's top 10 music videos of 2014. YouTube Creators Can Now Pick a URL That Reflects Their Channel Name. You know how it goes: one day you decide to open a YouTube account under the name of ‘JimmyLovesCats’, and on another you decide to start uploading your favorite videos of your feline friend. 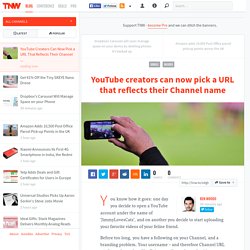 Before too long, you have a following on your Channel, and a branding problem. Your username – and therefore Channel URL – is JimmyLovesCats (YouTube.com/JimmyLovesCats) but you know you might stop posting cat videos one day, so branded everything JustJimmy from the start. However, you’re stuck with the original URL. YouTube makes gamers happy with 60fps playback. YouTube WatchMe Takes Live-Broadcasting to Any Android App. YouTube is Considering Offering an Ad-Free Subscription Package.

All channels Load More Support TNW - become Pro and we can ditch the banners. 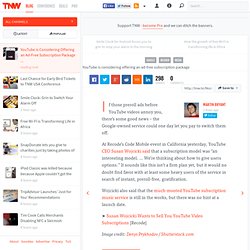 4 Ways to Rank Higher in YouTube Search Results. Do you want more people to see your YouTube videos? 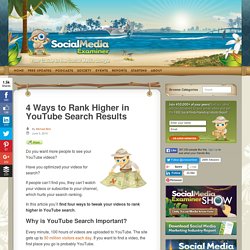 Have you optimized your videos for search? If people can’t find you, they can’t watch your videos or subscribe to your channel, which hurts your search ranking. In this article you’ll find four ways to tweak your videos to rank higher in YouTube search. Why is YouTube Search Important? Every minute, 100 hours of videos are uploaded to YouTube.

Besides being the largest video resource online, YouTube is also the second-largest search engine (right behind its parent company, Google). If you can tap into the traffic and publicity YouTube offers, you could instantly shoot to the top of YouTube’s search engine results. Quality videos get more clicks and views. Gangnam Style is First YouTube Video to Hit 2 Billion Views. Google YouTube Video Quality Report Launches in the US. There are now fewer places for US internet service providers (ISPs) to hide. 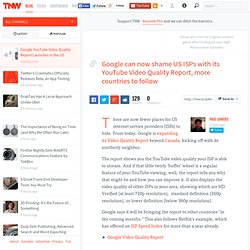 From today, Google is expanding its Video Quality Report beyond Canada, kicking off with its southerly neighbor. The report shows you the YouTube video quality your ISP is able to stream. And if that little twirly ‘buffer’ wheel is a regular feature of your YouTube viewing, well, the report tells you why that might be and how you can improve it. It also displays the video quality of other ISPs in your area, showing which are HD Verified (at least 720p resolution), standard definition (360p resolution), or lower definition (below 360p resolution).

Google says it will be bringing the report to other countries “in the coming months.” YouTube is Building a Mobile App for Creators. YouTube today announced a new initiative called Creator Preview, a video series in which the Google-owned company shares what features it is working on for creators. 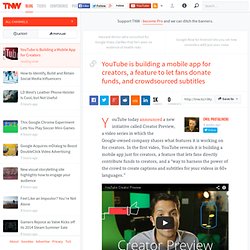 In the first video, YouTube reveals it is building a mobile app just for creators, a feature that lets fans directly contribute funds to creators, and a “way to harness the power of the crowd to create captions and subtitles for your videos in 60+ languages.” As you can see above, YouTube doesn’t actually show off any of the features in the video: it merely interviews a few engineers about why they think these are necessary additions. Mashable.

YouTube could be purchasing Twitch, the largest video game live-streaming network, for $1 billion, according to a report released by Variety Sunday evening. 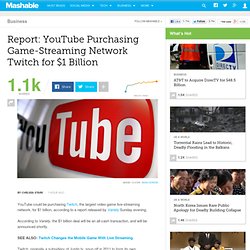 According to Variety, the $1 billion deal will be an all-cash transaction, and will be announced shortly. Twitch, originally a subsidiary of Justin.tv, spun off in 2011 to form its own gaming network. It has since drawn in huge traffic, getting an average of 45 million unique monthly viewers with hundreds of thousands of gamers broadcasting their own content. Twitch has become fully integrated with both the Xbox One and PlayStation 4 gaming consoles, allowing players to both stream and watch content from their televisions. "We don't comment on rumors," a Twitch spokesperson told Mashable.

YouTube Now Lets Creators Add a 3-Second Intro Their Videos. Google announced today a new feature for YouTube that will let creators upload a 3-second intro clip that will play before all of their channels’ videos. 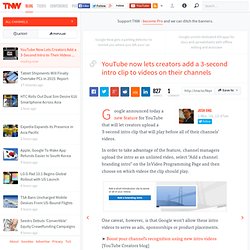 In order to take advantage of the feature, channel managers upload the intro as an unlisted video, select “Add a channel branding intro” on the InVideo Programming Page and then choose on which videos the clip should play. One caveat, however, is that Google won’t allow these intro videos to serve as ads, sponsorships or product placements. Mashable. Google's latest play in music streaming takes aim at Android users with the addition of "YouTube Mix," a feature familiar to desktop users that automatically generates playlists of your favorite artist's most popular videos. 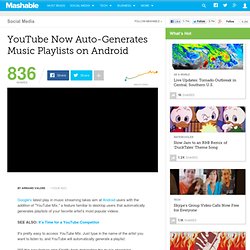 It's pretty easy to access YouTube Mix. Just type in the name of the artist you want to listen to, and YouTube will automatically generate a playlist. Will this new feature stop Spotify from dominating the music streaming business? Mashable. Jimmy Conrad was a reserve defender for the U.S. Men's National Team (USMNT) at the 2006 World Cup, getting onto the field against group-play opponents Italy and Ghana. He's going to Brazil for the 2014 World Cup in June — this time, however, in a completely different role. Conrad has become one of the Internet's go-to sources for soccer video content, thanks to his multi-pronged role with the popular YouTube channel KickTV.

Along with revolving around the world's favorite sport, Conrad's contrasting World Cup roles have something else in common: He's living a reality most can only dream of. 5 Little-known YouTube Features for Marketers. Mashable. Facebook CEO Mark Zuckerberg will keynote this year's F8 conference, the social network's major developer event slated for San Francisco at the end of April. Facebook announced the keynote and an expanded conference agenda on Wednesday, which includes speakers from the company and its subsidiaries Instagram and Parse.

The conference will be highly technical, with topics such as cross-platform apps and Facebook's server infrastructure on the schedule. YouTube Reportedly Developing a Version for Kids. As the biggest video sharing site by a landslide, YouTube attracts people from all walks of life, for better or for worse. Yet the Google-owned company is reportedly developing a version of the site for kids under 10 years old, and has even gauged the interest of video producers willing to create child-oriented content, according to multiple sources cited by The Information.

The goal would be to offer a site that parents could trust, free of both videos and comments that many adults would prefer children not see. Parents could, for example, access a special app on a device or TV that includes only kid-safe videos. The product isn’t anywhere close to being launched, however, and how exactly it will work can is still very much up in the air. #Selfie Music Video Dominates With Help From Social Media Influencers. We thought the selfie had a banner year in 2013. It was added to the Oxford dictionary. The President of the United States took a selfie at another world leader's memorial service. And multiple selfie apps hit the App Store. Could 2014 possibly be better? It's looking that way. The song, #SELFIE, was posted on YouTube Jan. 29 and, at time of writing, had more than 8.3 million views. The song has garnered some serious traction lately, and it hasn't done so by accident.

How these social robots are helping autistic kids. At the Duck’s Nest preschool in Oakland, Calif., a fluffy blue robot asks a group of toddlers, “I want to be your friend. Will you please be my friend?” Robotics experts are testing this low-cost and affable robot, called Romibo, at schools across the country. According to its creator, Aubrey Shick, special-needs children can benefit most from social robots like Romibo — particularly those with autism. Indeed, behavioral experts say that human facial features can overwhelm those with an autism spectrum disorder (ASD).

The Justin Biebers of Minecraft Are Rewriting the Marketing Playbook. On a large screen in a conference room at Salesforce.com's San Francisco office, the face of an adolescent girl appears. YouTube Begins Rolling Out A New, Cleaner User Interface. 21 February '14, 01:00am. Ben Affleck, Matt Damon Battle it Out for a Good Cause. EXCLUSIVE: Peanuts Touching Super Bowl Spot Packs Sweet Emotion.

Snoopy and the gang would like to wish you a very happy Super Bowl. Streamus Turns Chrome Into A Fast, Free, YouTube-Powered Spotify Alternative. Google Releases Video Quality Report. YouTube Experimenting With New User Interface Design. YouTube is in the process of testing out a new user interface, but while the company has made it available to a select few, there’s no word on when it will be rolled out to the public. As reported by Tech2Notify, the look and feel of YouTube appears to have been simplified and now is more on par with the service’s mobile apps, perhaps in an attempt to mirror the experience across all devices, no matter how videos are viewed.