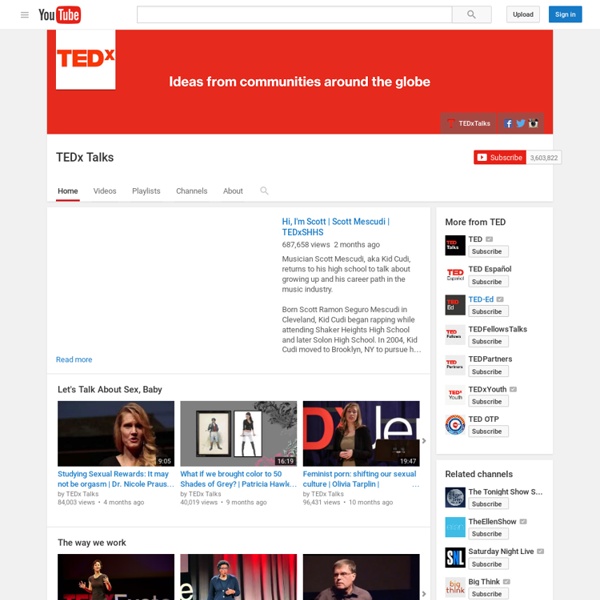 Musician Scott Mescudi, aka Kid Cudi, returns to his high school to talk about growing up and his career path in the music industry. Born Scott Ramon Seguro Mescudi in Cleveland, Kid Cudi began rapping while attending Shaker Heights High School and later Solon High School. In 2004, Kid Cudi moved to Brooklyn, NY to pursue his rap career. He released his first mixtape, “A Kid Named Cudi,” in 2008. The mixtape earned Kanye West’s attention, leading him to sign Cudi to his GOOD Music imprint. This talk was given at a TEDx event using the TED conference format but independently organized by a local community.

Announcing the Miso Project | Info Today we are releasing the first part of the Miso project, a set of Open Source tools designed to make it faster and easier to create high quality interactive and data visualization content. This project has been made possible by support from our Global Development desk, who are funded by the Bill & Melinda Gates foundation & in collaboration with Bocoup. The first part of Miso to be made public is a JavaScript library called Dataset, the website is here and the code is on Github, you can follow along development via Twitter @TheMisoProject One of the most common patterns we've found while building JavaScript-based interactive content is the need to handle a variety of data sources such as JSON files, CSVs, remote APIs and Google Spreadsheets. Dataset comes with a growing list of examples that showcase not only its ease of use, but also how easy it is to integrate it into existing libraries.

Chaîne de bigthink There are only two events in the universe that defy the laws of physics: black holes and the big bang, and while scientists try to explain them, crucial evidence may be eaten up in the meantime. Christophe Galfard's book is "The Universe in Your Hand A Journey Through Space, Time, and Beyond" ( Read more at BigThink.com: Follow Big Think here:YouTube: Transcript - The interesting thing about trying to unravel the laws of nature is that yes, we have found some laws. For a long time gravity has told us that nothing can escape the gravitational grip of a black hole. And everything we had known about black holes until the mid-1970s was only related to gravity.

Paul Gilding - Independent writer & advisor on sustainability. How To Bring Live Tweets To Readers Not On Twitter Featuring live tweets on news websites is a great way of bringing readers who may not use Twitter into the conversations that are happening there. Large news sites often use custom code to accomplish the task. Smaller sites tend to use Twitter’s own widget, which I find slow and inadequate for the task. Fortunately, there is a solution that uses a tool that many of us are already familiar with: CoveritLive. CoveritLive is not just for live blogging. The service is able to pull in the live tweets from individual users, lists, search terms and hashtags. 1. If you do not know how to use CoveritLive, a some great tutorials are available here. 2. At the next screen you will be presented with embed code. 3. 4. This can be done either by pressing “Launch Your Live Event Now!” 5.

Google Image Ripper » Dear Computer, The public version of Google Image Ripper has been discontinued. ✱ September 19 2004 - † April 29 2012 Modified Google Image Search results.No more thumbnails, straight to the good stuff! Features: Up to 100 full resolution images instead of thumbnails Search for all image sizes & types or specific ones All results on one easy-to-scroll page Includes links to image source pages Allows you to save all high resolution images in one go This is what you would get when searching for 'bike': Access is members only You can get a personal 6 months membership for $10. Any questions? Campfire Journalism 233grados.com eCuaderno The Future of News A colleague of mine at the UNC School of Journalism and Mass Communication, Val Lauder, recently shared this article with the faculty e-mail list. The piece, written by Johnnie L. Roberts for Newsweek, wonders “Can News Anchors like Katie Couric Survive?” I don’t know whether anchors like Katie Couric can survive, but there is one kind of news anchor that is thriving. They’re called bloggers. The Newsweek article is built around this money quote from Don Hewitt: And Hewitt, 85, the man who coined the term “anchor,” says it may signal the end of an era. We hear those last two sentences a lot, but what do they mean? The economic answer is that in an era of media proliferation and audience splintering the human personality is the most important factor in brand differentiation. The editorial answer is that anchors build trust. but it also said this: (From it sprang one short-lived, terribly unsuccessful and un-resurrected idea. Like this: Like Loading...