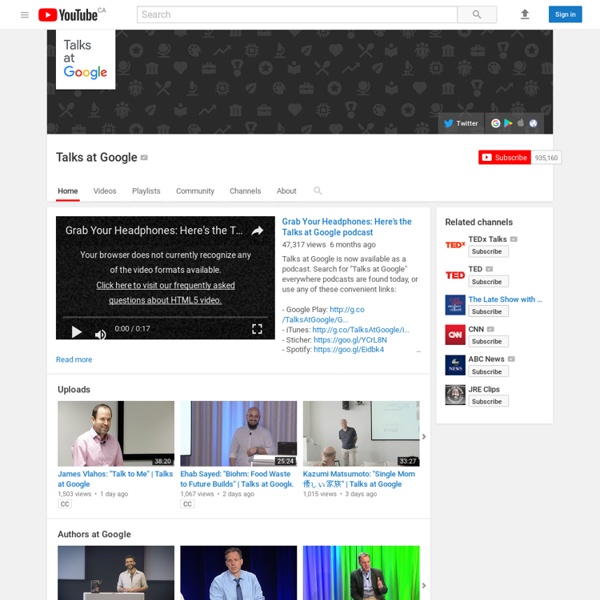 2015 brought us over 400 talks from across the world featuring unique and varied authors, artists, activists, filmmakers, chefs, musicians, politicians, scientists, stage performers, and more. Talks at Google will be celebrating 10 years in 2016 and we've already got an amazing lineup ready to go. Stay tuned! Check out the full version of all of these Talks here: [00:24] Bill Nye: "Undeniable" [00:27] Salman Rushdie: "Two Years Eight Months and Twenty-Eight Nights"[00:32] Dikembe Mutombo[00:41] Marie Kondo: "The Life Changing Magic of Tidying Up"[00:50] Brandon Sanderson: "Shadows of Self"[01:02] Bill Murray & Mitch Glazer: "Rock the Kasbah"[01:09] John Cleese: "So, Anyway.

How to hack your body language for better interviews Research interviews go best when participants feel comfortable and confident — they’re more verbal, more willing to explore, and more willing to play along. So when an interview isn’t going well, I check for signs of low status in the person I’m interviewing and adjust my body language to make them feel more in charge. (These techniques come from improv theater classes I took many years ago in San Francisco. In addition to learning about “yes and,” listening, and teamwork, I was introduced to the important concept of status — and how body language communicates high and low status.) How to spot signs of low status 100 Incredible Lectures from the World’s Top Scientists Posted on Thursday June 18, 2009 by Staff Writers By Sarah Russel Unless you’re enrolled at one of the best online colleges or are an elite member of the science and engineering inner circle, you’re probably left out of most of the exciting research explored by the world’s greatest scientists. But thanks to the Internet and the generosity of many universities and online colleges, you’ve now got access to the cutting edge theories and projects that are changing the world in this list below. If you’re looking for even more amazing lectures, check out our updated list for 2012 with more talks from great minds. General

Video // Current To Our Faithful Current.com Users: Current's run has ended after eight exciting years on air and online. The Current TV staff has appreciated your interest, support, participation and unflagging loyalty over the years. Tourism Tourism is a major economic activity in the European Union with wide-ranging impact on economic growth, employment, and social development. It can be a powerful tool in fighting economic decline and unemployment. Nevertheless the tourism sector faces a series of challenges. The European Commission works to address these with policies and actions. In the spotlight: Food tourism week at EXPO MILAN 2015

NOVA Can Wind Turbines Make You Sick? Residents living in the shadows of wind turbines say the sound is making them sick. But so far the science isn't there. From NOVA Next | Jun 27, 2018 Career Coach: 15 rules of etiquette for the cubicle By Joyce E. A. Russell August 14, 2011 Recently, a reader wrote in asking for guidance on the rules of etiquette for life in the cubicles. UC Berkeley Summer Reading 2006 The World Is Flat: A Brief History of the Twenty-first CenturyThomas L. FriedmanNew York: Farrar, Straus and Giroux, 2005 Although the message can be boiled down into fewer pages, a future President should understand that technology has created the opportunity for anyone in the world to perform tasks that used to be limited by geography. It sounds good for the world; is it good for the U.S.?

Channel N: Brain and behavior videos All About World Bipolar Day By Sandra Kiume For World Bipolar Day on March 30, 2014, Matthew McKenzie of London, England created a video to celebrate and inform. Continue reading… » High Tech Suicide Prevention Two suicide prevention advocates from Grassroots Suicide Prevention talk about developments in e-health, including search engines, smartphones, and social media. Free Textbook Collection Free textbooks (aka open textbooks) written by knowledgable scholars are a relatively new phenomenon. Below, find a meta list of 200 Free Textbooks, and check back often for new additions. Also see our online collection, 1,700 Free Online Courses from Top Universities. Art History Top Office Etiquette Rules: Pay Attention, and Be Nice Yes, all the technological tools we use in the workplace these days have probably made breaches of office etiquette more common. And many of us are moving at a faster pace at work than ever before, which can make us more susceptible to slip-ups when it comes to manners. But according to a recent Accountemps survey, these changes in the workplace haven’t led to shifts in the code of manners at most offices. Both executives and employees still notice breaches of the basic etiquette rules we learned in preschool: Pay attention when someone’s speaking to you, and if you don’t have anything nice to say, don’t say anything at all. When asked which rules were broken most often in their office, chief financial officers (CFOs) ranked being distracted during meetings at No. 1 (27 percent).