How to Think 'Outside of the Box' 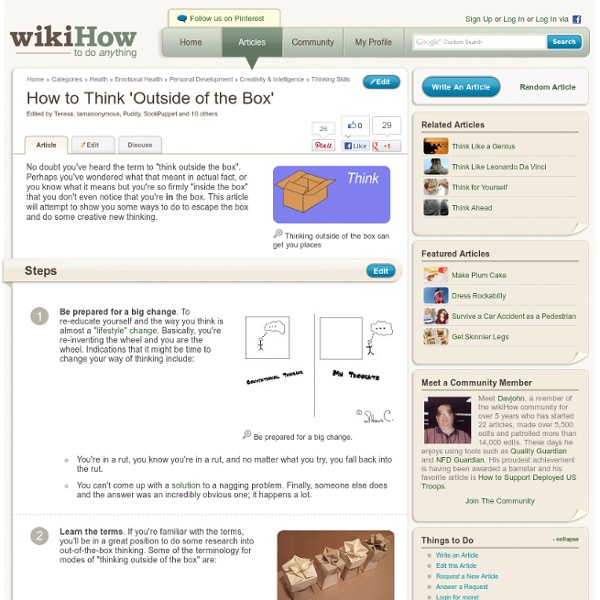 How to Think Like Leonardo Da Vinci: 7 steps (with pictures) Edit Article Cultivating CuriosityThinking ScientificallyPracticing Creativity Edited by LifeOptimizer.org, Krystle, Teresa, Sondra C and 28 others Leonardo da Vinci was the ultimate Renaissance man: an accomplished scientist, mathematician, engineer, inventor, anatomist, painter, sculptor, architect, botanist, musician, and writer. Ad Steps Method 1 of 3: Cultivating Curiosity 1Question received wisdom and authority. 5Draw your own conclusions. Method 2 of 3: Thinking Scientifically 1Ask probing questions. Method 3 of 3: Practicing Creativity 1Keep a detailed and illustrated journal. Tips Some other characteristics of da Vinci that might be worth emulating are: charismagenerositylove of naturelove of animalsthe curiosity of a childRead books. Warnings Because of his wide variety of interests, on his death bed he apologized to "God and Man for leaving so much undone

10 Ways to Develop Your Creativity | Schaefer's Blog If you're new here, you may want to subscribe to my RSS feed. Thanks for visiting! **Editor’s Note: The following is a guest post by Catharina F. de Wet, Ph.D and author of One View of Giftedland, a blog focusing on talented and gifted education. Google the word “creativity” and you will get almost 84 million hits. The first few has to do with defining creativity and it ranges from the cerebral Wikipedia definition: “Creativity (or “creativeness”) is a mental process involving the generation of new ideas or concepts, or new associations between existing ideas or concepts” to a simple definition by Henry Miller: “ The occurrence of a composition which is both new and valuable.” Because of research we know a significant amount about the creative process and creative people. Generally speaking, when we talk about a creative person, we have in mind two kinds of people. Here are ten things you can do to develop your creativity: 2 – Examine and remove perceptual blocks. 8 – Make time to think.

If You Are Creative, Are You Also Intelligent? According to an article in Newsweek , here in the United States we apparently have a creativity crisis . According to Kyung Hee Kim at the College of William and Mary, scores on the Torrance Test of Creative Thinking have been decreasing since the 1990's. The same article mentions that China is making a push to move away from rote memorization and adopt a more problem centered learning approach, perhaps like that of America. Contrast this with the results from the Program for International Student Assessment (PISA), which examines 15-year-old students in 65 countries. The U.S. scored about average in science, above average in reading, and below average in math. According to the New York Times , Mark Schneider , a former commissioner of the U.S. Which clearly raises the question: Why is China trying to emulate America's educational system if they are already doing so well? Let's consider another perspective, that of Bill Gates. Stefani Germanotta before becoming Lady Gaga

Space for Creative Thought Many people set aside their summer vacations as times for creativity—during their breaks they’ll finally start to work on that book or screenplay or painting that’s been floating around in their heads since last summer, for example. Environmental psychologists, also known as design psychologists, have been researching the sorts of places in which people are most likely to think creatively for some time, and everyone can apply what they’ve learned. Psychologists have found, for example, that we’re more likely to be creative in rooms with: Views of nature or a water feature Lots of daylight Leafy green plants Natural material finishes—wood surfaces with a lighter stain and visible grain are great at relaxing us into a mood that’s good for creative thinking Ceilings that are 10 feet high or so Warm-colored white light bulbs that make the space relatively (and comfortably) bright A few intriguing, thought-provoking items—say a couple of paintings The tools in place for the planned task.

Creativity techniques Creativity techniques are methods that encourage creative actions, whether in the arts or sciences. They focus on a variety of aspects of creativity, including techniques for idea generation and divergent thinking, methods of re-framing problems, changes in the affective environment and so on. They can be used as part of problem solving, artistic expression, or therapy. Some techniques require groups of two or more people while other techniques can be accomplished alone. These methods include word games, written exercises and different types of improvisation, or algorithms for approaching problems. Aleatory techniques[edit] Aleatoricism is the incorporation of chance (random elements) into the process of creation, especially the creation of art or media. In short, aleatoricism is a way to introduce new thoughts or ideas into a creative process. Improvisation[edit] The following are two significant methods: Problem solving[edit] Tools and methodologies to support creativity.[6] See also[edit]

7 Great Ways To Rekindle Your Creativity The chief enemy of creativity is “good” sense.~Pablo Picasso Creativity is the true starting point for all accomplishment in life. I supposed Pablo Picasso knew a little about creativity. In 2006, one of his paintings sold for over $95 million in an auction at Sotheby’s. Creativity seems to breed creativity. We have to use it or we lose it. I challenge you today to rekindle your creativity. Today, I want to share with you some excellent ways to spark creativity in your life. 1. This is a secret of creativity that many successful people use. 2. You need a creative project to get your juices flowing. 3. Are you an early bird or a night owl? 4. Creativity flourishes where thinking is unrestricted. 5. One of the biggest obstacles to creativity many of us face is fear. 6. As you know, the Internet is a goldmine of resources. 7. Write down a creative goal that you dream of accomplishing. Don’t let “good” sense rob you of your creativity! In what ways do you stimulate your creativity?

6 Techniques to Ignite Your Inner Creativity & Passion Most of us were taught that creativity comes from the thoughts and emotions of the mind. The greatest singers, dancers, painters, writers, and filmmakers recognize that the most original, and even transformative, ideas actually come from the core of our being, which is accessed through an "open-mind consciousness." In ancient traditions, open-mind consciousness was considered to be a spiritual awakening, the great enlightenment that dissolves the darkness of confusion and fear , and ushers in peace, happiness , clarity, and contentment. Today the notion that there's one formulaic way to achieve this spiritual awakening and creative vibrancy has been blown apart. What Sarah described has been called not only "open-mind awareness" but also, in the West, a "peak experience," "being in the flow," or "being in the zone." Here are 6 ways you can stimulate and tone your creativity from my book, Wise Mind, Open Mind . 1. 2. 3. 4. 5. 6.

Techniques for Creative Thinking Collectively, there are several hundred techniques published in books by Michael Michalko, Andy Van Gundy, James Higgins, Dilip Mukerjea and others. Techniques are like tools in a workshop, with different tools for different parts of the creative process. For example, there are techniques for defining a problem, exploring attributes of a problem, generating alternatives, visual explorations, metaphors, analogies, and evaluating and implementing ideas. Here is a small selection of techniques: For further background, read the introduction which discusses the question: "What can I do to increase my creativity?" Catalogues or Encyclopaedias of Techniques? You may be wondering if there are books or an encyclopaedia of these techniques to use as a reference. Andy Beckett in the United Kingdom is compiling a collection of techniques on his web site www.mycoted.com

Seeing Your World in TechniColor Most people see the world in black and white, missing most of the opportunities in their midst. They travel down the same routes day after day. The path is so familiar that they can practically navigate it in their sleep . But, there are some people who see the world in Technicolor. Their eyes are wide open and the endless opportunities are always evident. Tom Kelley, author of says that every day you should act like a foreign traveler by being acutely aware of your environment . Paying careful attention to your environment actually takes some effort. Even when we think we’re paying full attention, there’s usually so much more to see.