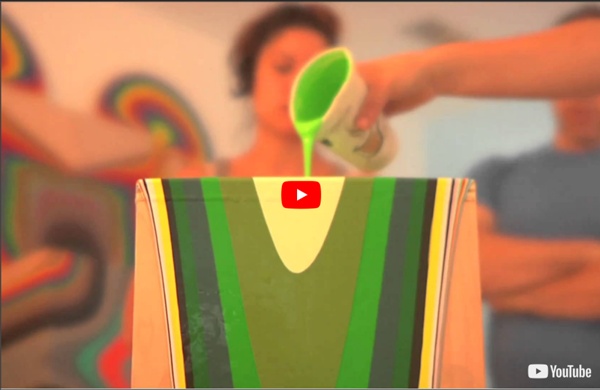 Tutorial: Homemade Sidewalk Chalk by Michelle Vackar, Modern Handmade Child One of our favorite outside activities at our home is drawing with chalk on the driveway. You can play hopscotch, four-square, and of course draw and create silly stories. My daughters and I were talking one day as we played hopscotch about how to make chalk and I thought to myself, let’s try it! It ended up being quite a lot of fun. What you will need: • Toilet paper or paper towel tubes • Scissors • Duct tape • Wax paper • Small bucket or disposable container to make the recipe • ¾ cup of warm water • 1 ½ cups Plaster of Paris • 2-3 tablespoons of tempera paint • Paper bag or a “mess mat”

The Infinity Room With this immersive installation, French artist Serge Salat invites visitors to take a journey through endless layers of space, decked out with cubic shapes, panels of mirrors, shifting lights and music. “Beyond Infinity” is a multi-sensory, multimedia experience that blends Eastern Chinese with Western Renaissance. Inspired by the Suzhou Gardens, a masterpiece of Chinese landscape, the three-lined trigram of I Ching is the main pattern that organizes the space of the work. Salat uses mirrors as optical illusions, exploding a single room into spatial infinity. Haunting underwater photography by Neil Craver Whether it be underwater photographs or macroscopic pictures of insects running over a human’s face, Neil Craver, aka Photon Organon, always manages to give his works a haunting feel. The talented photographer from North Carolina originally started out as an abstract painter and figurative sculptor.

47 Sites Every Recording Musician Should Visit In a recent “Open Mic” we asked you, “Which music-related sites do you visit regularly?” This article is a summary of the great suggestions given in the comments to that article. You can make the list even longer by commenting on this article. As you’re reading this article, Audiotuts+ needs no introduction. Paper Flowers – Anyone Can Do That Japanese Kusudama, this tutorial is featured on Craftuts Anyone can do that, I assure you. The proof: I can, just take a quick look at my result below. And, believe me, I am neither meticulous nor particularly patient. You could even say I’m the opposite. Below you can see my very first attempt to create paper flowers.

Photos: The Flying Baby Henry first flew last summer. Exhausted and bored on an assignment, photographer Rachel Hulin, Henry’s mother, thought it would be fun to make her baby fly. So Henry flew. “The photo was sort of magical in an unexpected way and I wanted to make more,” Hulin said. Magic circle Common terms and practices[edit] A solomonic magic circle with a triangle of conjuration in the east. This would be drawn on the ground, and the operator would stand within the protection of the circle while a spirit was conjured into the triangle.[citation needed] Traditionally, circles were believed by ritual magicians to form a protective barrier between themselves and what they summoned.[1] In modern times, practitioners generally cast magic circles to contain and concentrate the energy they believe to raise during a ritual.

Quilling - Turning Paper Strips into Intricate Artworks Quilling has been around for hundreds of years, but it’s still as impressive and popular now as it was during the Renaissance. The art of quilling first became popular during the Renaissance, when nuns and monks would use it to roll gold-gilded paper and decorate religious objects, as an alternative to the expensive gold filigree. Later, during the 18th and 19th centuries, it became a favorite pass-time of English ladies who created wonderful decorations for their furniture and candles, through quilling. Basically, the quilling process consists of cutting strips of paper, and rolling them with a special tool. It sounds simple enough, but special skill is required to create more advanced shapes like marquises, arrowheads or holly leaves. All through the years, the art of quilling has remained almost unchanged, but new specialty supplies now allow quilling masters to create anything from detailed 3-D figures to wall-sized museum installations.

Incredible and Scary 3D Pencil Drawings by 17-year old Fredo Realistic pencil drawings are always interesting. It is nice to watch how artist has managed to draw something like it was photographed by camera. However, the plenty of the pencil drawings you have seen by now probably cannot be compared with the following drawings which are literally mind-blowing.Those drawings were made by Fredo, a 17-year old guy from Chile who has found an interesting way to create 3D drawings.Fredo has started to think more seriously about his drawing skills when he was 15. He has learned from some already known artists in this field like M.C.Escher.

Your Birthday, Your Tree and their meanings (wowzone.com) WOW Poetry, lyrics, music, stories, classics, Wish Only Well Find your birthday and its corresponding tree. Then, see the meaning behind it below. Do you recognize yourself? How to make gift bags from newspaper When I bought something at a store recently, the clerk handed me my purchase in a bag made from a newspaper. I liked it very much and had to make some more—thus today's DIY recycled newspaper project: gift bags made from the Wall Street Journal. You can vary the dimensions, of course, but here's what I used to create a bag that's 5" tall, 4.5" wide, and 3" deep. Stack two sheets of newspaper on top of each other.

Tara McPherson Tara McPherson is an artist based out of New York City. Creating art about people and their odd ways, her characters seem to exude an idealized innocence with a glimpse of hard earned wisdom in their eyes. Recalling many issues from childhood and good old life experience, she creates images that are thought provoking and seductive. People and their relationships are a central theme throughout her work. Tara exhibits her paintings and serigraphs in fine art galleries all over the world. Named the crown princess of poster art by ELLE Magazine, she has created numerous gig posters for rock bands such as Beck, Modest Mouse, and Melvins.