Above The Influence of Ignorance 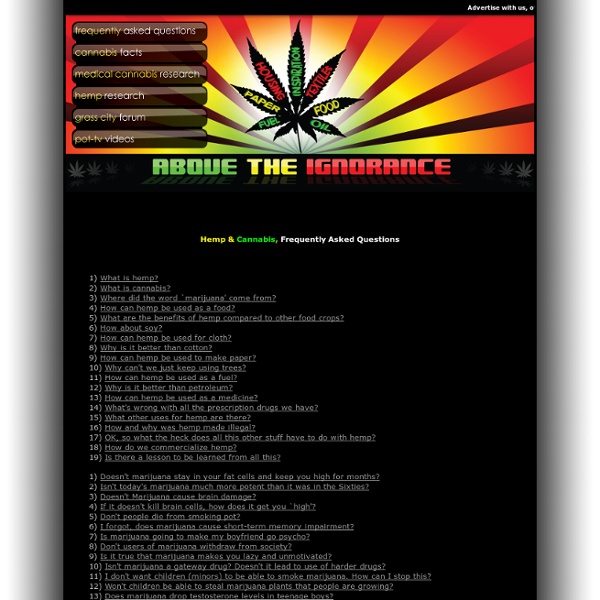 Cannabis Enhancing plant South African Bushmen have been chewing kanna (Sceletium tortuosum) for hundreds of years to reduce stress, relieve hunger and elevate their moods. Now there are plans to market the exotic plant worldwide as a new over-the-counter drug, according to PhysOrg.com. The first license ever issued to market kanna was given to the South African company HGH Pharmaceutical, who intend to sell it as a dietary supplement. "We're positioning [the product] for everyday people who are having a stressful time in the office, feeling a bit of social anxiety, tension or in a low mood," said Nigel Gericke, director of research at HGH. Though the company intends to produce their kanna product in pill form, the plant is traditionally chewed, smoked or made into a tea. At intoxicating levels, kanna taken alone can cause euphoria and sedation. "It's a product with huge potential," said Ben-Erik Van Wyk, a University of Johannesburg botanist.

To Dab Or Not To Dab? With each passing month, the popularity – and controversy – of butane hash oil (BHO) and the phenomenon surrounding it (known as “dabbing”) continues to grow in the cannabis community. Some hail it as a miracle medicine, a quantum leap forward in stoner evolution. Others criticize it, pointing to the potential dangers involved in both making and ingesting it, as well as possible negative effects on the public’s increasingly favorable attitude toward marijuana. Here at HIGH TIMES, it’s our duty to cover this issue as honestly and responsibly as we can – addressing any genuine concerns and dispelling unwarranted fears. Solvent vs Nonsolvent Extraction The first question to be addressed is: What’s the difference between solvent extracts and traditional hash? “You’re getting a lot of extra goodies that come out in those solvent extracts,” observes Bob Melamede, Ph.D. But there are those who disagree – such as Selecta Nikka T, owner and operator of Colorado’s Essential Extracts. The Purge

Stop the federal pot raids A months-long crackdown on medical marijuana by federal prosecutors has reached new heights with this week's raids on Oakland dispensaries. It's time to call off the overboard tactics and deal sensibly with regulating a drug that increasing numbers of Americans feel poses little harm. The latest incident only furthers the tone-deaf image of the U.S. It's a ridiculous stance that mocks a serious issue. But Prohibition Era-style sweeps won't work. Second, easing the availability of medical marijuana also has lowered the public's fear factor of the drug. Finally, the federal raids ignore the core of the issue: bridging the gap between unbending federal controls and growing numbers of states, including California, that want updated consideration of the drug. To be sure, court rulings and legal obstacles make change difficult. Yet this confusion doesn't excuse this week's raids.

Marijuana, THC, Cannabis, Pot, Weed Cannabis is Schedule I at the Federal level in the United States. This means it is illegal to manufacture, buy, possess, or distribute (sell, trade or give) without a DEA license. However, 9 states have made it available by prescription. And Washington and Colorado Residents Can Use Cannabis Legally Addictive Potential: Low Emergency Room Visits Yearly: 79,663 in 2003 more… Mandatory Minimum Sentence: 5 years for 100 kg to 999 kg mixture; or 100 to 999 plants Mechanism of Action: Binds to and activates the cannabinoid receptors in the brain Overview: Cannabis, or Marijuana, is a genus of flowering plant that includes one or more species. The reason cannabis is not as addictive as other drugs is simply because the discontinuation of use results in only mild withdrawal symptoms, if any at all. Cannabis & Short Term Memory Loss: Cannabis is linked to short term memory loss because of the concentration of cannabinoid receptors in the hippocampus. Cannabis and Your Lungs: Recipes: Articles: Videos:

Top 11 Marijuana Documentaries by Evilpig on May 3, 2010 | 56 Comments This list was written by Hail Mary Jane.com These are by far some of the best marijuana documentaries to date. All of them are eye-opening and most of them make a serious case for the legalization of marijuana and/or medical marijuana. Except for Reefer Madness, I threw that in for a different reason. 1. 2. 3. 4. 5. 6. 7. The next two I couldn’t embed so they are only links. 8. 9. And for the last two I couldn’t find anywhere online to watch, but they are both very good. 10. Waiting to Inhale covers medical marijuana and the life of Robert Randall, the first medical marijuana patient in the United States. Last but not least: 11. You can leave a response, or trackback from your own site. LOOK UP -- New, Full Documentary -Chemtrails, Geo-Engineering, & Weather MOD. Must Watch!

25 Animals that Love Weed! by Evilpig on January 22, 2010 | 26 Comments via HMJ Continue reading for more! As a bonus, here is my kitty! You can leave a response, or trackback from your own site.