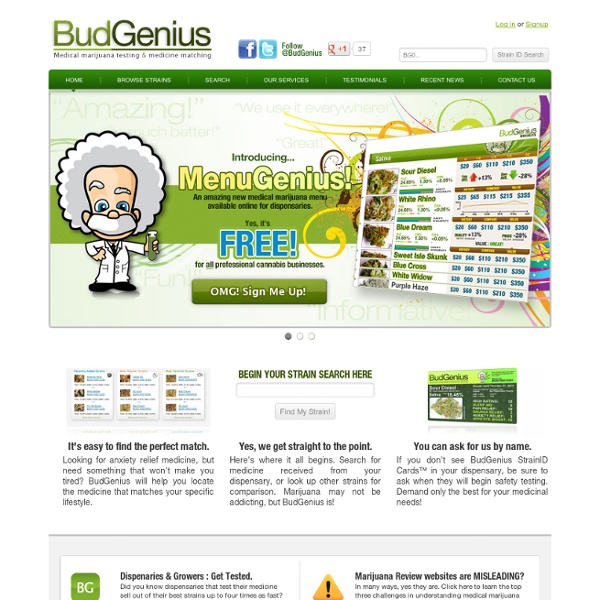 How WeedMaps Makes More Than $400,000 a Month For most of the U.S., marijuana is an illicit pleasure. But in some states--California, Colorado, and Washington, to name a few--it's a legal vice, provided you have a medical marijuana card. The marijuana network can be daunting for the uninitiated, with offerings like Blue Dream, Strawberry Cough, and Green Crack on dispensary menus. How are patients supposed to navigate? That's where WeedMaps.com comes in. In just two years, the WeedMaps website (tagline: Find Your Bud) has grown to more than $400,000 each month in revenue and 25,000 visitors each day. Like many a successful entrepreneur, Hartfield realized there was a gap in the market. At first, Hartfield offered dispensaries the opportunity to display listings for free. In January 2010, WeedMaps started charging for listings. A quick search for my nearest dispensary--Medithrive--yields a dizzying amount of information about the dispensary's offerings (Not So Virgin Olive Oil, anyone?)

Molecular mechanism found that controls marijuana-like substance in body | KurzweilAI - (Build 20100722150226) A newly discovered molecular mechanism helps control the amount and effectiveness of a substance that mimics an active ingredient in marijuana, but that is produced by the body’s own nerve cells. The results were reported in the latest Nature Neuroscience. The lead author on the study is William R. Marrs of the Neurobiology and Behavior program at the University of Washington (UW). The senior author is Dr. In previous papers, Stella and other scientists have noted that the body manufactures several cell signals called endocannabinoids that mimic the actions of marijuana-derived chemicals. Because cannabinoid signaling systems are common throughout the body and affect a variety of functions, therapies aimed at these systems might be more wide-ranging than simply a better substitute for medicinal marijuana. Controlling cannabinoid receptors to control pain, anxiety, and brain inflammation Breaking apart 2-AG reduced its accumulation and decreased its ability to prod other cells to action.

Nugshots - Professional Medical Marijuana Photography and Design Marijuana, THC, Cannabis, Pot, Weed Cannabis is Schedule I at the Federal level in the United States. This means it is illegal to manufacture, buy, possess, or distribute (sell, trade or give) without a DEA license. However, 9 states have made it available by prescription. And Washington and Colorado Residents Can Use Cannabis Legally Addictive Potential: Low Emergency Room Visits Yearly: 79,663 in 2003 more… Mandatory Minimum Sentence: 5 years for 100 kg to 999 kg mixture; or 100 to 999 plants Mechanism of Action: Binds to and activates the cannabinoid receptors in the brain Overview: Cannabis, or Marijuana, is a genus of flowering plant that includes one or more species. The reason cannabis is not as addictive as other drugs is simply because the discontinuation of use results in only mild withdrawal symptoms, if any at all. Cannabis & Short Term Memory Loss: Cannabis is linked to short term memory loss because of the concentration of cannabinoid receptors in the hippocampus. Cannabis and Your Lungs: Recipes: Articles: Videos:

Israeli company grows medical marijuana which doesn't get you high Situated in an undisclosed location near Tzfat, northern Israel, is a government-approved medical marijuana plantation which was founded in 2004 by a retired biology teacher. Named Tikun Olam, the plantation has created a new cannabis strain which contains very low traces of tetrahydrocannabinol (THC), the main constituent in cannabis responsible for making people feel "stoned". By virtually eliminating THC in the new strain, Tikun Olam can now offer the drug's medicinal benefits to those patients who wish to keep a clear head. Marijuana contains over 60 constituents named cannabinoids and though THC is the most famous due to its psychoactive effects, another important constituent is cannabidiol (CBD). CBD is believed by some researchers to offer anti-inflammatory benefits, thus offering the potential to relieve pain without making patients intoxicated, if the THC-to-CBD concentrations can be correctly balanced. The new strain of marijuana created at Tikun Olam does just that.

THC Gives Cancer Cells the Munchies Too : The Scientific Activist Through the results of widespread experimentation of the… well… let’s say “non-scientific” variety, it’s pretty well known that marijuana has the side effect of making the user very hungry. This is one of the many physiological effects of the active ingredient THC (?9-tetrahydrocannabinol). A new study by Salazar et al. in The Journal of Clinical Investigation demonstrates that THC causes tumor cells to begin to degrade themselves from the inside (a process called autophagy, i.e. Despite the imagery that the title of this post (and maybe even casual experience) may imply, it’s not that THC causes cancer cells to ravenously and indiscriminately destroy themselves. Mostly, this is interesting (to me) more for the big picture aspect and the implications for clinical medicine. Hat tip to Mo of Neurophilosophy.

When you are high.. When you are high.. (11 votes, average: 5.00 out of 5) Loading ... Posted in Images on April 10th, 2010 by Demon | Report This Post | Add to favorites Disclaimer: Unless specifically mentioned in the post, we have no clue where this picture came from. What cannabis actually does to your brain Chances are they would've ended up brainless morons with or without the pot. It's quite frankly not strong enough of a narcotic to destroy one's life such as you describe. It's very dependent on the user's persona. @Tadashii: Are you also for alcohol and tobacco prohibition? Those ruin more lives every year then marijuana has ever. Wow- Tadashii, pot is not meth or cocaine. Yes, its a chemical that can intoxicate and has been embraced by, and been the cause of some lazy folks, underachievers, and Grateful Dead fans not amounting to much. Pot is like anything else- tobacco, alcohol, vicodin, valium, caffeine, etc. Cannabis has great promise for any treatment that requires appetite stimulant (such as cancer, HIV, etc), and has also been found to act as an anti-inflammatory or nausea reliever, Don't just stamp marijuana "evil". Do you enjoy any caffeinated sodas, cigarettes, or the occasional alcoholic beverage? Yes I am against alcohol too and I agree that it's worse than pot.

Marijuana (Weed) History and Facts People around the world have been smoking marijuana for thousands of years while also using the hemp plant for everything from fabric and rope to ethanol fuel. Unfortunately, somewhere along the way, a man with a bit of power and enough determination decided pot was wicked, evil and narcotic. He moved mountains to make it illegal worldwide. Between 1937 and 1947, the government spent $220 million on the war against drugs. First Fabric Known to Man The hemp plant, also called cannabis or marijuana, has been used around the world for thousands of years. Cannabis Seeds Used as Food Around 6000 BCE hemp seeds were used as food in China. Cannabis is Cultivated and Left as an Offering In 1500 BCE Scythians started to cultivate cannabis for weaving cloth. "Sacred Grass" Named One of Five Sacred Plants in India Cannabis is called "Sacred Grass" in the Hindu sacred text Arthava-Veda and named one of the five sacred plants of India. Hemp Use Spreads Throughout Europe Marijuana Comes to the New World