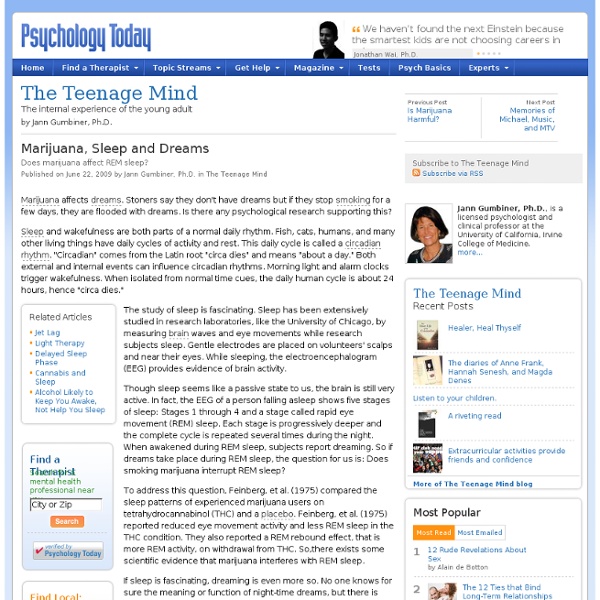 Marijuana affects dreams. Stoners say they don't have dreams but if they stop smoking for a few days, they are flooded with dreams. Is there any psychological research supporting this? Sleep and wakefulness are both parts of a normal daily rhythm. The study of sleep is fascinating. Though sleep seems like a passive state to us, the brain is still very active. To address this question, Feinberg, et al. (1975) compared the sleep patterns of experienced marijuana users on tetrahydrocannabinol (THC) and a placebo. If sleep is fascinating, dreaming is even more so. In his book Memories, Dreams, and Reflections , Jung describes some fascinating dreams of his own. I must confess I have never been visited by a giant phallus during the night, but I have had some pretty cool dreams. Feinberg, I., Jones, R, Walker JM, Cavness, C, March, J. (1975).

Secret of the Green Dragon Get Higher with Mangoes Unlike the rumor smoking banana peels will produce a high, mangoes do contribute to increasing a stoners' weed high. Marijuana contains a chemical called Myrcene. High grade marijuana bud generally contains a comparatively higher concentration of myrcene than low grade cannabis bud. Mangoes, Lemon grass, and other less-common plants also contain high amounts of this chemical. Myrcene is believed to aid the potency of the marijuana high by allowing the psychoactive chemicals found in cannabis, namely THC, to cross the blood-brain barrier more efficiently. The following method does work, however there are some variables. I've determined when smoking high grade marijuana bud, you are less likely to feel any difference because the bud already contains a high amount of myrcene. To discover the effect mangoes have on your weed high, smoke lower grade marijuana. Purchase a small amount of schwaggy marijuana. Click here for more detailed info on: Haze Cannabis Seeds Some stoners report getting ripped.

Cannabinoids Occur Naturally In Human Breast Milk Providing further evidence that humans and cannabis were meant to co-exist, a study from 2004, of which an abstract was recently published in the European Journal of Pharmacology, shows that breast milk naturally produces cannabinoids, chemicals also found to naturally occur in the cannabis plant. “”[E]ndocannabinoids have been detected in maternal milk and activation of CB1 (cannabinoid receptor type 1) receptors appears to be critical for milk sucking … apparently activating oral-motor musculature,” the study says. In layman’s terms, the endocannabinoids in breast milk teach babies the desire for milk, without which they would starve to death. The process is similar to the one that gives marijuana users the “munchies” and allows cancer patients and the like the ability to eat and live when they use medical cannabis. Seen in this light, the prohibition of marijuana looks even more ridiculous. Maybe one day we will rectify our mistake. - Joe Klare

Legal Marijuana: How To Invest In Pot MarketWatch: Mark Twain is said to have remarked that a gold rush is a good time to be in the pick and shovel business. Investors may be able to apply that same bit of wisdom to the growing number of U.S. states that have legalized pot. Although federal law prohibits the sale or possession of marijuana, Massachusetts last week joined the ranks of states — 18 plus Washington, D.C. — that allow its use for people suffering from chronic illnesses like cancer, HIV/AIDS, multiple sclerosis and epilepsy. Those changes have kickstarted a small but fast-growing medical-marijuana industry, estimated to be worth about $1.7 billion as of 2011, according to See Change Strategy, an independent financial-analysis firm that specializes in new markets. In addition to profiting itself from growing and selling marijuana, the industry benefits a slew of other businesses, such as insurers, lawyers and agricultural-equipment firms, experts say. Also on HuffPost:

CBD Fighting Cancer ​Two of the major compounds in marijuana -- THC (tetrahydrocannabinol) and CBD (cannabidiol) have cancer-fighting properties, according to scientists researching them. But while the biological mechanisms THC uses are well documented, there are still mysteries surrounding the lesser-known CBD. Clinical trials prove that CBD eases pain and inflammation, reports Dana M. But CBD doesn't fit well in the already-discovered human receptors that fit THC, and scientists don't yet know how it modulates some of the same systems as THC, according to McAllister. "There is not a lot of data on it," McAllister told the Record. Right now, McAllister is investigating how CBD attacks a gene called Id-1 that is the key to the functioning of cancerous cells. "If cancer cells adopt this protein, it allows them to metastasize," McAllister said. "There is no way to actually kill yourself with the natural compounds," McAllister said. More links from around the web!

Could hemp help nuclear clean-up in Japan? - Portland medical marijuana dispensaries I've been glued to the television and internet reports about the unfolding disaster in Japan. First an 8.9 magnitude earthquake strikes near the island nation, then a tremendous tsunami washes ashore and leaves an estimated 10,000 dead and thousands more missing. Now the failure of power and back-up cooling units has led to potential meltdowns in the country's nuclear reactors. (CleanEnergy.org) As reported in the New York Times today: two reactors at the Fukushima Daiichi plant 170 miles north of Tokyo appear to have suffered partial meltdowns and three reactors at the nearby Fukushima Daini plant are dealing with failures in the cooling system. I've been teased by friends and family that no matter what the story is on the news, I can find a way that it ties to marijuana. Getting those toxic and radioactive elements out of the soil is crucial to restoring the ecosystem after a nuclear disaster.