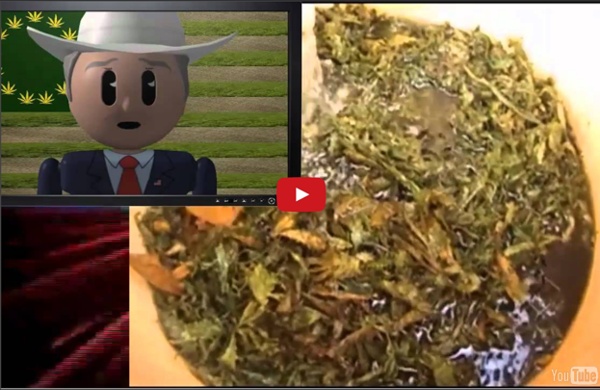 Cannabis Extract Fights 'Incurable Form' of Leukemia Sayer Ji, Green Med InfoWaking Times A remarkable case report documents a 14-year old girl who, after 34-months of chemo, radiation and bone marrow transplant treatments, was given up for dead. Her family discovered research on cannabis extract, and before she died of a secondary complication of her original treatment, used it successfully to put her leukemia into remission. There are plenty of anecdotal reports of the successful use of cannabis in treating cancer, but few cases occur under conventional medical supervision, and virtually none make it into a peer-reviewed biomedical journal as a case report. Remarkably, however, just such a case was reported in Case Reports in Oncology last year, and involved a 14-year girl diagnosed with a form of cancer of the white blood cells known as acute lymphoblastic leukemia (ALL). The figure below shows the successful suppression of the blast cells using cannabis extract. In the discussion portion of the case report, the authors noted,

56 Percent Of Americans Favor Legal Marijuana In New Poll Fifty-six percent of Americans think marijuana should be legalized and regulated like alcohol and tobacco, according to a nationwide Rasmussen poll of 1,000 likely voters. Asked earlier this month, "Would you favor or oppose legalizing marijuana and regulating it in the similar manner to the way alcohol and tobacco cigarettes are regulated today?" only 36 percent of likely voters opposed the concept and 8 percent were undecided. Neill Franklin, a retired Baltimore narcotics cop and the executive director of advocacy group Law Enforcement Against Prohibition, sees the poll as a political weather vane pointing toward the future. "Polling now consistently shows that more voters support legalizing and regulating marijuana than support continuing a failed prohibition approach," he said in a statement Tuesday. Indeed, the Rasmussen poll is far from the first to find the majority support legalizing marijuana. Also on HuffPost:

Flavonoid Molecular structure of the flavone backbone (2-phenyl-1,4-benzopyrone) Isoflavan structure Neoflavonoids structure Flavonoids (or bioflavonoids) (from the Latin word flavus meaning yellow, their colour in nature) are a class of plant secondary metabolites. According to the IUPAC nomenclature,[3][4] they can be classified into: flavonoids or bioflavonoids.isoflavonoids, derived from 3-phenylchromen-4-one (3-phenyl-1,4-benzopyrone) structureneoflavonoids, derived from 4-phenylcoumarine (4-phenyl-1,2-benzopyrone) structure. The three flavonoid classes above are all ketone-containing compounds, and as such, are anthoxanthins (flavones and flavonols). Biosynthesis[edit] Functions of flavonoids in plants[edit] Flavonoids are widely distributed in plants, fulfilling many functions. Salutary effects on human health[edit] Chemistry[edit] Immobilized Candida antarctica lipase can be used to catalyze the regioselective acylation of flavonoids.[13] Medical research[edit] In vitro[edit] In vivo[edit]

AboutClay The Endocannabinoid System and How THC Cures Cancer Marco Torres, Prevent DiseaseWaking Times There are close to 20,000 studies on cannabinoids in the pubmed database. Few scientists who concentrate their work around cannabinoids can deny the tremendous therapeutic potential of cannabis. Dr. Christina Sanchez, a molecular biologist at Compultense University in Madrid Spain, has completed extensive research which led to one of the first discoveries that THC does indeed kill cancer cells. The endocannabinoid system is a group of receptors in the brain that are involved in a variety of physiological processes including appetite, pain-sensation, mood, and memory; it mediates many physiological processes, including motor learning, synaptic plasticity, and appetite. The Endocannabinoid System (ECS) maintains our biological systems by regulating each cell tissue. Concentrate made from the flowering tops of the cannabis plant can produce a viscous oil containing large doses of active cannabinoids. About the Author