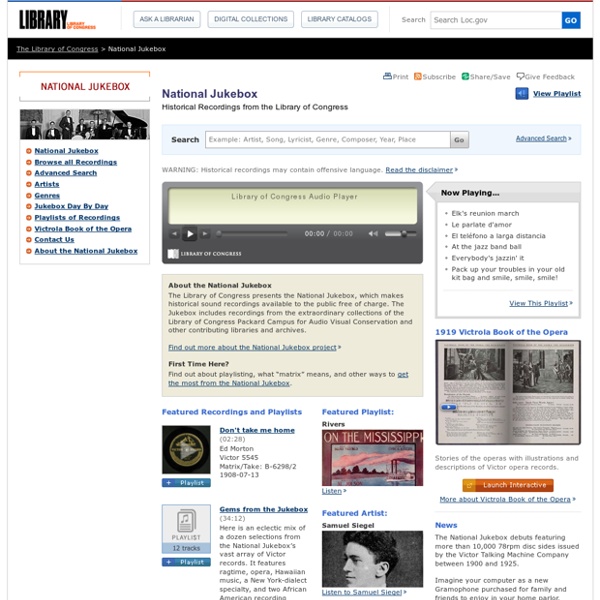 WARNING: Historical recordings may contain offensive language. Read the disclaimer Now Playing... Elk's reunion march Le parlate d'amor El teléfono a larga distancia At the jazz band ball Everybody's jazzin' it Pack up your troubles in your old kit bag and smile, smile, smile! View This Playlist 1919 Victrola Book of the Opera Stories of the operas with illustrations and descriptions of Victor opera records. More about Victrola Book of the Opera News The National Jukebox debuts featuring more than 10,000 78rpm disc sides issued by the Victor Talking Machine Company between 1900 and 1925. Imagine your computer as a new Gramophone purchased for family and friends to enjoy in your home parlor. Victor Advertisements The success of the Victor Talking Machine Company is often attributed to its aggressive and comprehensive print advertising campaigns. Coming Soon to the National Jukebox New recordings are added to the Jukebox periodically.

Related:  listen • Sound studies • Where to find information - US History

100 Ways to Discover and Enjoy Music UPDATE 12/10/13: We’ve released a follow-up to this post with 100 More Ways to Discover and Enjoy Music. Prepare yourself for another dose of Monday roundup madness! It’s time for another crazily comprehensive, yet carefully curated, look at an entire industry–the music industry to be specific. This if the first in a two-part series on the music industry which will conclude next week. This week’s focus is on the consumer side of music. Below you’ll find the best resources for music fans including ways to discover new tunes, the best tools and services for creating a perfect music listening experience, tons of concert and live show resources, many ways to enhance Spotify, social tools for getting down with your friends, iPhone and Android music apps, music locker (cloud) services and finally some miscellaneous resources that you’re bound to love.

7 Ways Noise Affects Your Health We are surrounded by sound. From coworker chit-chat to the sounds of traffic outside to that tinny trace of music coming from a co-commuter’s earbuds, we often don’t consider the noise that makes up our daily environments. But the truth is that the distant jackhammers, incessant elevator bells and even the whistling and humming of the people around us can have a real effect on our health and wellness. As pioneering noise researcher and environmental psychologist Arline Bronzaft, Ph.D., of the City University of New York has said, noise is in the ear of the beholder. “While the ear picks up the sound waves and sends it to the temporal lobe for interpretation, it’s the higher senses of the brain that determine whether that sound is unwanted, unpleasant or disturbing.”

How-To: Easily Remove the Vocals from Most Songs 2015 Shortcut: When I wrote this article Audacity didn’t have an automatic center-panned vocal canceling effect… but now it does, so rather than do the stereo-separate / invert-one-track / play-both-as-mono trick (and that’s pretty much all there is to it), you should be able to find the Vocal Remover option in the Effects menu – but it’s more fun / interesting and can give better results if you do it yourself! =D I found this trick the other day whilst stumbling the Interwebs and thought I’d do a quick-write up w/ pictures to make it as easy as possible… For this exercise we’re going to be using a piece of free audio software called Audacity, which you can get for Linux, Windows and Mac. Update: If you’re trying this out on a Mac, please make sure you get Audacity 1.3 Beta or newer – the stable 1.2 version appears to have a missing equaliser decibal-range slider which you need towards the end of the process! 1.) Import Some Audio

CDRH Articles and Resources Recommendations for Digital Humanities Projects The Center for Digital Research in the Humanities (CDRH) recommends that digital research projects be based on international standards. Standards-based projects stand a greater chance of interoperating with similar sites, and are more likely to migrate successfully into new computing environments as file formats and standards change. Music, Arts & Culture : Free Audio : Download & Streaming collection eye Listen to this collection of 78rpm records and cylinder recordings released in the early 20th century.

Treasures of the Dead Media Museum In 1995, Bruce Sterling issued a challenge: “I’ll personally offer a CRISP FIFTY-DOLLAR BILL for the first guy, gal, or combination thereof to write and publish THE DEAD MEDIA HANDBOOK.” He wanted to read the definitive history of “media that have died on the barbed wire of technological advance, media that didn’t make it, martyred media, dead media…” Bruce appealed for help collecting stories and notes about dead media, and over the next five years, notes and suggestions accumulated, a stockpile of personal recollections, lists and book extracts, collected by the early inhabitants of the Internet. But the book never happened.

African Americans and World War I World War I was a transformative moment in African-American history. What began as a seemingly distant European conflict soon became an event with revolutionary implications for the social, economic, and political future of black people. The war directly impacted all African Americans, male and female, northerner and southerner, soldier and civilian. Migration, military service, racial violence, and political protest combined to make the war years one of the most dynamic periods of the African-American experience. Black people contested the boundaries of American democracy, demanded their rights as American citizens, and asserted their very humanity in ways both subtle and dramatic. Recognizing the significance of World War I is essential to developing a full understanding of modern African-American history and the struggle for black freedom.