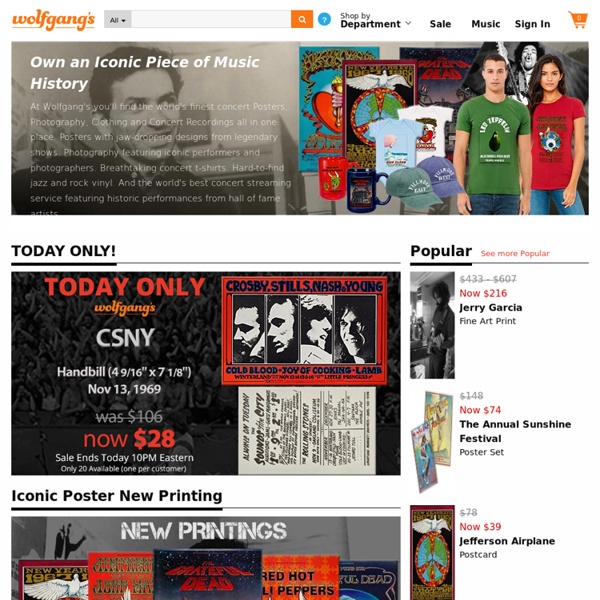 National Jukebox LOC.gov WARNING: Historical recordings may contain offensive language. Read the disclaimer Now Playing... The Three Rules of Tie Jewelry There’s no better way to win the hearts and minds of the sartorial set than a vintage tie clip, bar or pin. But before you break into the world of meta-accessories, you’ll want a map of the territory. To that end, we present to you the three cardinal rules of accessorizing your tie. Learn them well. Choose the Right Tie If it’s something expensive, a solid light color, or silk, we’d recommend staying away from a pin entirely—it will leave a noticeable hole. Save the pin for a wool tie that can withstand a little prodding (in fact, you might want to dedicate your heaviest tie to the cause and leave it at that).

TAILS Tails includes Tails Installer a custom installer for USB sticks and SD cards. Tails Installer can only install Tails on a USB stick or SD card of at least 4 GB. In order to use Tails Installer, you need to start Tails from another media, and clone it onto the device of your choice, USB stick or SD card. To do that, you can either: Using Tails Installer allows you to later create a persistent volume in the free space left on the device. All the data on the installed device will be lost.This operation does not securely delete the lost data on the installed device.This operation does not copy the persistent volume of the device which is being cloned.

100 Ways to Discover and Enjoy Music UPDATE 12/10/13: We’ve released a follow-up to this post with 100 More Ways to Discover and Enjoy Music. Prepare yourself for another dose of Monday roundup madness! It’s time for another crazily comprehensive, yet carefully curated, look at an entire industry–the music industry to be specific. This if the first in a two-part series on the music industry which will conclude next week. This week’s focus is on the consumer side of music. Below you’ll find the best resources for music fans including ways to discover new tunes, the best tools and services for creating a perfect music listening experience, tons of concert and live show resources, many ways to enhance Spotify, social tools for getting down with your friends, iPhone and Android music apps, music locker (cloud) services and finally some miscellaneous resources that you’re bound to love.

Worth1000 Home Welcome fans of Worth1000.com. If you're looking for Worth's amazing creative content, then you've rocked up to the right place! Just in case you missed the news, Worth1000.com is now part of DesignCrowd.com - and we've preserved all the amazing Worth1000 content here so you can search the archives to find old favorites and new contest art. We're delighted to have Worth1000's talented users and their treasure trove of imaginative and original content, built over many years, as part of our design community. But enough of that, we assume you want to get on with checking out some great design tips, brilliant creative contests, or even find some paid design jobs. We've got you covered:

TEN MYTHS ABOUT CAPITALISM Capitalism in the neoliberal version has exhausted itself. Financial sharks do not want to lose profits, and shift the main burden of debt to the retirees and the poor. A ghost of the “European Spring” is haunting the Old World and the opponents of capitalism explain people how their lives are being destroyed. Music, Arts & Culture : Free Audio : Download & Streaming collection eye Listen to this collection of 78rpm records and cylinder recordings released in the early 20th century.

Naval Science 302: Lesson 20 Naval Science 302: Navigation and Naval Operations II Lesson 20: Crisis Decision Making: USS Vincennes Case Study VincennesA Case Studyby Lieutenant Colonel David Evans, U.S. Marine Corps (Retired) Captain Mohsen Rezaian was piloting his fully loaded Iran Air Airbus through 13,000 feet on a routine Sunday morning flight across the Persian Gulf to Dubai, when a burst of shrapnel ripped off the left wing and tore through the aft fuselage. We shall never know Captain Rezaian's last moment, but in that instant before oblivion he may have looked in horror out his left window and thought that the slab of flapping aluminum and severed hydraulic lines where the wing had been was the result of some sort of structural defect.

The 50 Best Full Albums Free Online The following list is of the most popular full albums available for free on youtube. Have you ever just needed something to put on while you do a task but couldn't think of what to listen to at the time? Try using this list to find the music you know and to experiment with the music you don't. 1. Tactical Philosophies of the Squad / der Erste Zug Tactical Philosophies of the Squad The following was taken from the Die Neue Feldpost newsletter & was done so with permission of the publisher. We would like to thank him for his generosity as well as thank all those who have contributed to this article. Every Noise at Once italian progressive metal deep symphonic black metal christian symphonic metal

Elementary Particles A text summary of this presentation is shown below for easy reference Particles electron neutrino νe muon neutrino νμ tau neutrino ντ electron antineutrino νe William Basinski's A Shadow In Time is the tribute David Bowie deserves Drone master William Basinski’s new album A Shadow In Time is dedicated to David Bowie. Miles Bowe examines the record and talks to Basinski about its influences and significance. “Some old rotten things that the cat in New York had chewed up.” That’s how William Basinski described the loops that form the backbone of his towering new album A Shadow In Time to FACT before its live debut last year. Basinski came across the damaged tape in his archives not expecting much, but from the moment he heard its starry strings, he knew he was onto something something special.

This is a great site for all thigs rock and blues. Free streaming music, videos, and vintage t-shirts, posters, etc. by jenniflower Feb 14