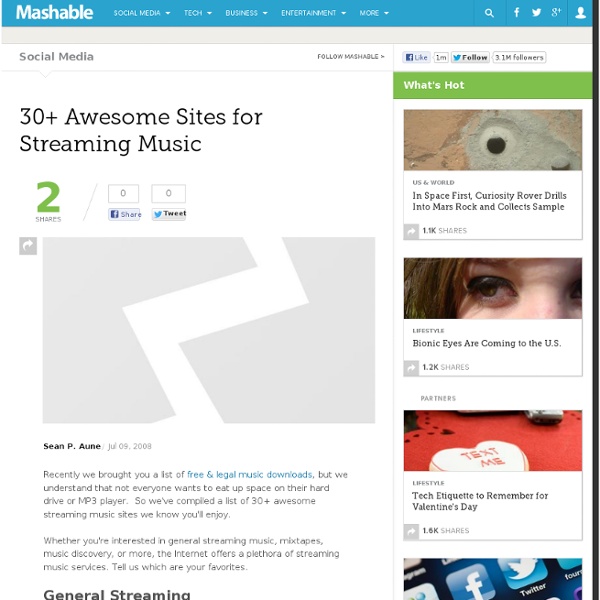 Recently we brought you a list of free & legal music downloads, but we understand that not everyone wants to eat up space on their hard drive or MP3 player. So we've compiled a list of 30+ awesome streaming music sites we know you'll enjoy. Whether you're interested in general streaming music, mixtapes, music discovery, or more, the Internet offers a plethora of streaming music services. General Streaming AH.fm - Streaming techno and dance music, as well as a forum for you to discuss with other fans. AmazingTunes.com - Search for artists you want to hear or choose from a list of stations. AOL Radio - Powered by CBS Radio, AOL Radio brings you talk, streaming music and actual radio stations. Deezer.com - Part social network, all music. DI.fm - Digitally Imported specializes in streaming electronic and dance music from all around the globe. Free.Napster.com - Free streaming music from Napster that includes full albums. MP3.com - Stream the music, or download it free. Mix Tapes Music Discovery

Film Streaming in Italiano SnipMP3 Twitdom » The Twitter Applications Database Web conferencing Web conferencing may be used as an umbrella term for various types of online collaborative services including web seminars ("webinars"), webcasts, and peer-level web meetings. It may also be used in a more narrow sense to refer only to the peer-level web meeting context, in an attempt to disambiguate it from the other types of collaborative sessions. [1] Terminology related to these technologies is inexact, and no generally agreed upon source or standards organization exists to provide an established usage reference. The distinction between webcast and webinar is becoming particularly difficult to define as functionality and usage becomes more similar and vendors substitute the terms freely. For more details, see Etymology below. Installation and Operation[edit] Web conferencing software is invoked by all participants in a web meeting. Presentation of visual materials most often is accomplished through one of two primary methodologies. Etymology[edit] Features[edit] Standards[edit]