But Does it Foat? 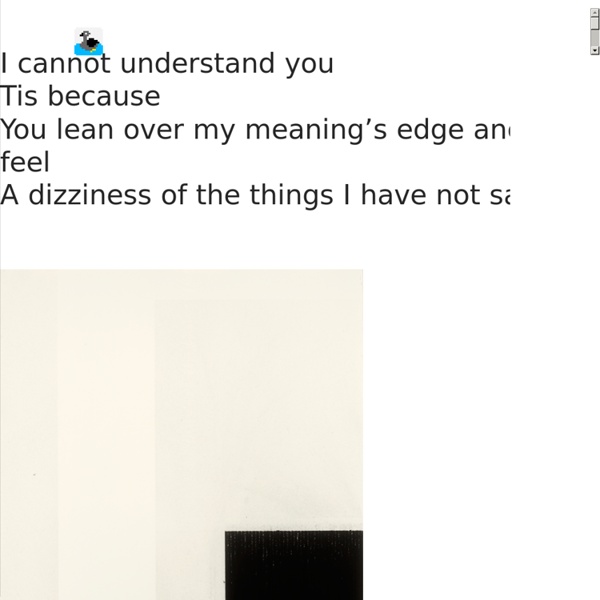 The Only Guide You Will Ever Need to Art Nouveau So a few of you shamelessly encouraged me to discuss Art Nouveau. I don't think you guys even knew what you were getting into. I love Art Nouveau. It's quite easily the single greatest influence on my art and general aesthetic... ever. And because I'm me, I couldn't just be like OH HERE ARE SOME PRETTY PICTURES. The Archigram Archive [Image: From an "ongoing speculative proposal exploring the implications of cones of vision and their interaction with an existing neoclassical ‘temple’ on the River Thames in Henley, Berkshire," by Archigram/Michael Webb]. As of roughly 16 hours ago, the Archigram Archival Project is finally online and ready to for browsing, courtesy of the University of Westminster: the archive "makes the work of the seminal architectural group Archigram available free online for public viewing and academic study." The newly launched site includes more than 200 projects; "this comprises projects done by members before they met, the Archigram magazines (grouped together at no. 100), the projects done by Archigram as a group between 1961 and 1974, and some later projects." There are also brief biographies of each participating member of the collaborative group: Warren Chalk, Peter Cook, Dennis Crompton, David Greene, Ron Herron, and Michael Webb.

About Ars Electronica What is Ars Electronica? Art, technology, society. Since 1979, Ars Electronica has sought out interlinkages and congruities, causes and effects. The ideas circulating here are innovative, radical, eccentric in the best sense of that term. They influence our everyday life—our lifestyle, our way of life, every single day. The Festival as proving ground, the Prix as competition honoring excellence, the Center as a year-‘round setting for presentation & interaction, and the Futurelab as in-house R&D facility extend their feelers throughout the realms of science and research, art and technology. The International Dada Archive - The University of Iowa Founded in 1979 as part of the Dada Archive and Research Center, the International Dada Archive is a scholarly resource for the study of the historic Dada movement. The Archive has compiled a comprehensive collection of documentation and scholarship relating to Dada. The collection of the International Dada Archive is made up of works by and about the Dadaists including books, articles, microfilmed manuscript collections, videorecordings, sound recordings, and online resources. Primary access to the entire collection is through the International Online Bibliography of Dada, a catalog containing approximately 60,000 titles.

timor2013.tumblr.com Done this mandala at AKA Berlin some days ago…Thanks! Done this centipede some days ago on my friend Martin Jahn-MJTattoos at AKA Berlin. Thanks! Done at AKA Berlin.Thanks! Done at AKA Berlin.Thanks Today was my first day at AKA Berlin as guest tattooer. Jason Lee Creatively Captures His Kids If there was a prize that could be given out to the most creative father, I'd hope that it was awarded to Jason Lee. A wedding photographer by day, he's used to capturing some of the most important moments in a couple's lives. As a longtime fan of Jason's photos on Flickr however, I think the real magic happens when he turns the camera onto his daughters. Sure, his children are adorably cute in their own right, but that's not what makes his photos so interesting. It's when he puts his own spin on their everyday moments that we not only get to experience our own childhood again, we're able to see a father's pride shine through. I was able to get in touch with Jason to ask him a few questions.

DataViz: Programming languages, toolkits and libraries This is part of a series of posts to share with readers a useful collection of some of the most important, effective and practical data visualisation resources. This post presents the range of data visualisation programming languages, toolkits and libraries, sometimes used in isolation, often used in partnership to accomplish specific functions. Please note, I may not have personally used all the packages or tools presented but have seen sufficient evidence of their value from other sources. Whilst some inclusions may be contentious from a quality/best-practice perspective, they may still provide some good features and provide value to a certain audience out there. Finally, to avoid re-inventing the wheel, descriptive text may have been reproduced from the native websites if they provide the most articulate descriptions. Your feedback is most welcome to help curate this collection, keep it up to date and preserve its claim to be an essential list of resources!

Hi-Fructose Magazine In his portrait series, the Austrian artist Aldo Tolino deconstructs, folds, reassembles and weaves printed photographs in order to create origami-like sculptural pieces. Tolino then re-photographs the works, converting the pieces back into two-dimensional objects. The disturbing quality of the images may not just be due to the fact that the folded faces appear distorted, disproportional and almost entirely stripped of identity. In their conversion back to a photographic object, these pieces also suggest a cycle of infinite reprocessing and deformation, wherein the portrait will only continue to move further away from the original “true” image.

Flipboard app offers one of the best viewing experiences for this site. Nicely ties in the quotes with the fantastic images. by mojojuju Nov 24