Ten Steps for Boosting Your Creativity 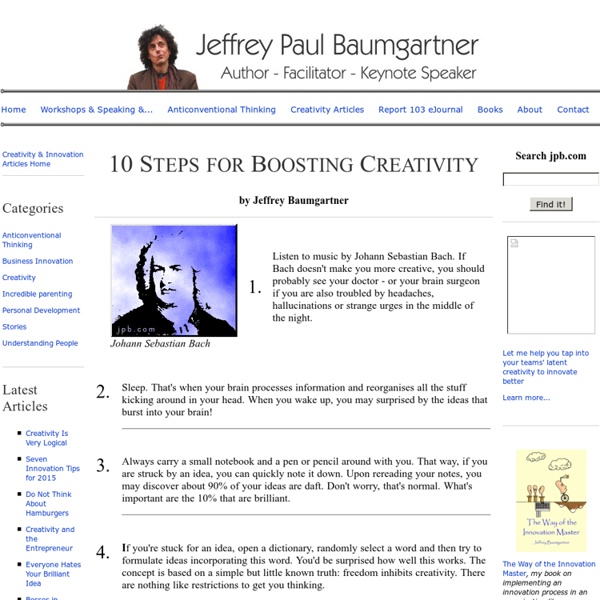 Great News! You can now buy 10 Steps for Boosting Your Creativity as a Poster! It is perfect for the office or the home and makes for a terrific gift. Follow this link to see the poster and order yours! For a more scientific explanation of creative ideas, check out this article..

7 Ways to Cultivate Your Creativity [Slide Show]: Scientific American Slideshows Email Order now to receive an issue of Scientific American MIND , risk-free, with no obligation to buy. » Get your risk-free issue today....[ More ] Give a Gift & Get a Gift - Free! Give a 1 year subscription as low as $9.99 Howstuffworks "How Knights Work" When you think of knights, you might envision King Arthur, Sir Lancelot or the Black Knight. We often think of heroic knights in shining armor fighting each other with swords or riding their horses on noble quests. Our images of knights have been influenced over centuries by romance authors (like T.H. White and Sir Walter Scott) and by movies like "Ivanhoe," "Excalibur," "A Knight's Tale," "Camelot" and "Monty Python and the Holy Grail." But what were knights really like?

Einstein-The World As I See It "How strange is the lot of us mortals! Each of us is here for a brief sojourn; for what purpose he knows not, though he sometimes thinks he senses it. But without deeper reflection one knows from daily life that one exists for other people -- first of all for those upon whose smiles and well-being our own happiness is wholly dependent, and then for the many, unknown to us, to whose destinies we are bound by the ties of sympathy. A hundred times every day I remind myself that my inner and outer life are based on the labors of other men, living and dead, and that I must exert myself in order to give in the same measure as I have received and am still receiving...

8 Harsh Truths that Will Improve Your Life - Dumb Little Man They say life is what we make of it. By the end of this post, I hope to have helped you decide whether that statement is true or not. There is no doubt that life has its ups and downs. However, how we deal with them can sometimes make all the difference. Today I want to share eight harsh truths that I’ve come to learn from life. 10 More Common Faults in Human Thought Humans This list is a follow up to Top 10 Common Faults in Human Thought. Thanks for everyone’s comments and feedback; you have inspired this second list! It is amazing that with all these biases, people are able to actually have a rational thought every now and then. There is no end to the mistakes we make when we process information, so here are 10 more common errors to be aware of. The confirmation bias is the tendency to look for or interpret information in a way that confirms beliefs.

Everyday Creativity The tattoo artists throughout Russia's prison system have never had lessons in painting technique (nor, apparently, hygiene training). They don't have ink and tools at their disposal. And yet they create entire murals on one another's chests and backs: onion-domed cathedrals, intricate cobwebs, chilly grim reapers. And they're not just beautiful decorations—they are coded biographies, telling those in the know their bearer's history and affiliations. One would be hard-pressed to find a tougher environment than the jails where these artists work.

How to Flesh out a Country or Region in Your Fantasy RPG World - Edit Article Edited by Zach Haffey, Maluniu, Glutted, Nicole Willson and 5 others Hello game master/fantasy author. This is a guide to organizing and sorting out the finer details and aspects of a specific country or region of your world: a format for the living details that help you and your players delve in to the role-playing aspect of your game. Ad