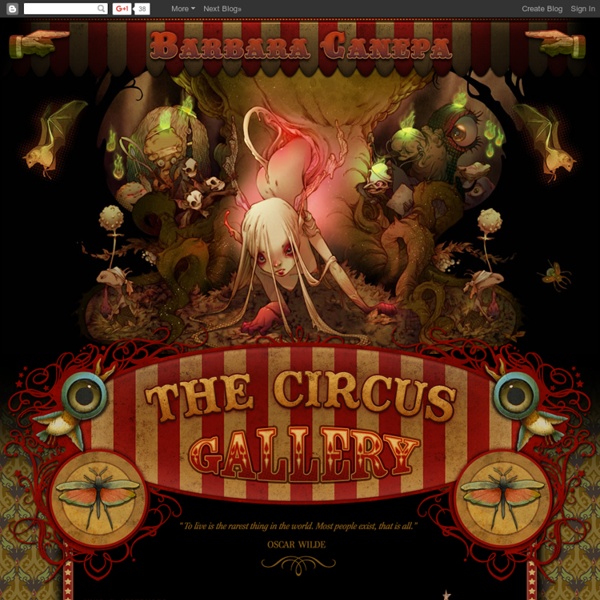 ------ First of all, I have to say a foreword ------Je dois faire une introduction avant tout © Barbucci/Canepa/Editions Soleil FB really replaced blogs, this is really a fact. Even for me, who was always punctual with posts, it's now been months I've been away from the blog. and I didn't even notice that I was away for such a long time. I apologise, then. Today, I would really like to renew this blog, simpler and more useful , but I don't have much time.

cake or death | m • o • y • a Hi. I’ve been trying some new things for a small project. Starting tomorrow, the Arludik Gallery is hosting a new show titled Merveilleux! for which I did a small ink piece. Unsounded September 23, 2016, at 12:00 AM With these two NSFW pages and a Ch12 preview, that's a wrap for chapter 11! Unsounded's been going since July of 2010. santos cerdos ! Funeral is a story about a trio of slackers who like to watch car accidents.At this moment this is my most personal work. This short film is my graduation project from digital animation. It was first presented on February 2014 at the Universidad Veritas. High Resolution Rats and everything we know about them.Taken from the Santoscerdos Animal Encyclopaedia. Chapter: ‘Animals that survived the XXIst Century’Text: Dirt•Squeaks•Hair•Bites•Plague•Diseases• This Robot plays blues and jazz music, that’s his function. At this very moment he is performing Idle Moments, as played by Grant Green on 1964.Este robot está programado para tocar jazz y blues, una especie de rocola que deleita tanto con su música como con su ejecución.

| Ink Butter™ | Tattoo Aftercare Posted on December 4, 2013 by lenny . Episode 6 of AOL On’s new original series My Ink features NASCAR Pit Crew queen and Cross-Fit expert Christmas Abbott. Christmas utilizes her past to fuel her fire on the track and in the gym. She’s out to prove that with handwork and dedication she can break through any glass ceilings in the sports world all while adorned with her favorite ink. Google+ Posted on December 3, 2013 by lenny . okolnir You're welcome to ask questions in chat and I'll do my best to answer them! But you can help me save time by reading this list of common questions first. Definite schedule: Wednesday 4-6pm EST here, Sunday 9pm-midnight on twitch.tv/adobe.

Videos Straight-away I was reminded of Jake Fried, but only in materials/process. It’s clear that Emanuele is also intuitively fleshing out the movement frame-by-frame as he goes but his work is unique in that there’s no figurative elements to recognize; only abstract geometry and form that, when quilted together, comes across as both familiar and foreign. I’m reminded of the notebooks I used to fill with random scribbles while bored out of my mind in high school: I’d start with a stray line or a random shape and then try to make sense of it with the remaining paper, as if the choatic mess left by my pen was what I had intended to create from the beginning. It was a way to pass the time and entertain myself instead of blankly staring at the clock, fantasizing about the bell that would eventually set me free. Thanks for passing this one along, Sam Lillard!

Hot 3d Cartoon Characters by Andrew Hickinbottom Andrew Hickinbottom is an artist born in 1979 in Wolverhampton, currently working from London, UK. He specializes in character design, character modeling and pinup art. Below, you may see 30 top-notch works handpicked from his portfolio. These are pretty awesome, so make sure to keep your eyes open for portion of quality inspiration .). HYPERCASTLE The Silent Tower and The Silicon Mage are the first two books in Barbara Hambly’s portal fantasy series The Windrose Chronicles. For those unfamiliar with the term, a portal fantasy involves travel between two realms: our familiar Earth at some point in history and somewhere else, either Faerie, Heaven, Hell, a dreamscape, or another planet entirely. In this series, the two realms are Los Angeles in the 80s and the Empire of Ferryth on another world. In the first two books, it’s never explicitly stated whether the Empire’s planet is another Earth existing in a parallel dimension or a different planet orbiting a different sun altogether; however, both worlds contain human beings that are sufficiently similar for the same magic spells to work on both.

Hand Poses Galore! One of the most over looked parts of a character's body when animated are the hands. Our "phalanges" can convey just as much emotion and intensity as our faces. You can also think of hand gestures as the punctuation of a character's body language. That's why the hands need careful thought and consideration but remember...simplicity is key! Here are some excellent resources for hands: Milt Kahl hand poses

the_dimka: codex seraphinianus in the late 70s italian architect, illustrator and industrial designer luigi serafini made a book, an encyclopedia of unknown, parallel world. it’s about 360-380 pages. it is written in an unknown language, using an unknown alphabet. it took him 30 month to complete that masterpiece that many might call “the strangest book on earth”. codex seraphinianus is divided to 11 chapters and two parts - first one is about nature and the second one is about people.btw five hundred years ago there was another book somewhat like that - voynich manuscript. take a look at some pages (click on image to see a bigger version) amazon sells those for 500 bucks or more you can read about it in wikipedia.i can’t even tell you how much i like stuff like that