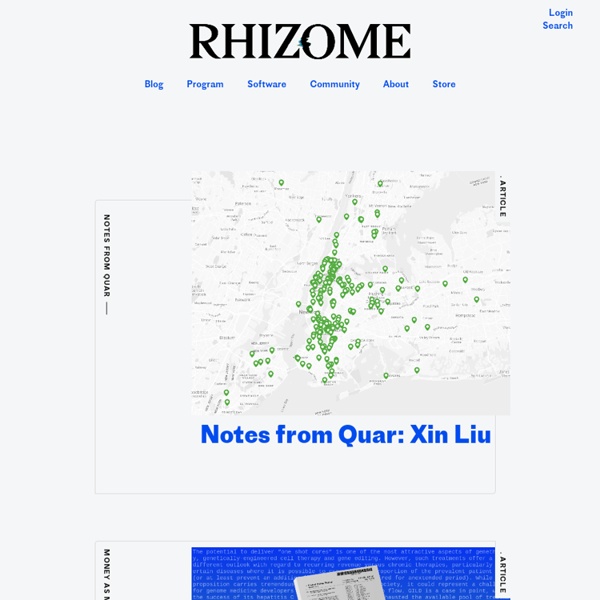 Tony Conrad, Yellow Movie 12/17/72 If, as Tony Conrad might have us suppose, a Movie is light and any marking of the passage of time, what is Documentary Cinema as a category? In fact, the Minimalist structural filmmaking practices of Conrad and others share concerns with documentary's base impulse, namely the transmission of a "factual record or report." As screen culture settles into its well-earned ubiquity, we must revisit old questions about the where and the what of cinema as an object and what constitutes something separately known as the "cinematic." All cinema is, on some level, depictive, not necessarily by choice, but rather by inevitability. As fictional as any narrative may assert itself to be, it is also a real event.

The World Wide Web project The WorldWideWeb (W3) is a wide-area hypermedia information retrieval initiative aiming to give universal access to a large universe of documents. Everything there is online about W3 is linked directly or indirectly to this document, including an executive summary of the project, Mailing lists , Policy , November's W3 news , Frequently Asked Questions . What's out there? Pointers to the world's online information, subjects , W3 servers, etc. Help on the browser you are using

Fine art Fine art, from the 17th century on, has meant art forms developed primarily for aesthetics, distinguishing them from applied arts that also have to serve some practical function. Historically, the 5 main fine arts were painting, sculpture, architecture, music and poetry, with performing arts including theater and dance.[1] Today, the fine arts commonly include additional forms, such as film, photography, conceptual art, and printmaking. However, in some institutes of learning or in museums, fine art and frequently the term fine arts (pl.) as well, are associated exclusively with visual art forms.

Wonderland by Kirsty Mitchell: heart-breakingly beautiful photographic series in memory of an extraordinary life Kirsty Mitchell's Wonderland series has been three years in the makingAll costumes, wigs and sets were constructed on a shoestring budgetSome images took up to five months to createShe would often wait an entire year to find the perfect natural setting for her shots By Stephanie Hirschmiller Published: 14:11 GMT, 17 May 2012 | Updated: 09:34 GMT, 18 May 2012 Kirsty Mitchell's late mother Maureen was an English teacher who spent her life inspiring generations of children with imaginative stories and plays. Following Maureen's death from a brain tumour in 2008, Kirsty channelled her grief into her passion for photography. She retreated behind the lens of her camera and created Wonderland, an ethereal fantasy world.

Film Poster Paintings from Ghana In the 1980s video cassette technology made it possible for “mobile cinema” operators in Ghana to travel from town to town and village to village creating temporary cinemas. The touring film group would create a theatre by hooking up a TV and VCR onto a portable generator and playing the films for the people to see. In order to promote these showings, artists were hired to paint large posters of the films (usually on used canvas flour sacks). The artists were given the artistic freedom to paint the posters as they desired - often adding elements that weren’t in the actual films, or without even having seen the movies.

Man-Computer Symbiosis Man-Computer Symbiosis J. C. R. Licklider IRE Transactions on Human Factors in Electronics, volume HFE-1, pages 4-11, March 1960 Sweet Station Zemer Peled Peled was born and raised in a Kibbutz in the northern part of Israel. After completing a BA (Hons) at the Bezalel Academy of Art and Design in Jerusalem she graduated with an MA (Hons) from the Royal College of Art. In recent years her work has been featured nationally and internationally in museums and galleries including Sotheby’s and Saatchi Gallery-London, Eretz Israel Museum-Tel Aviv and the Orangerie du Senate, Paris among others.

Street Art Current Issue On sale now at newsstands or on screen May 2014 - Issue #160 All year long, Juxtapoz is celebrating its 20th Anniversary by showcasing the pivotal figures in contemporary art over the past two decades. Some artists are blue chip, some are underground heroes, others are behind-the-scenes legends. humanæ 1. On the Customize screen turn off the Use default mobile theme option under Advanced Options. 2. Remove the stash logo from your website by getting a Full License. 3. For the Instagram feed generate your Access Token & User ID here. Design Search Code Manual - Table of Contents - Introduction 1. The General Guidelines provide broad instructions and procedures for coding and interpreting the design search codes. 2. Each design search code is a numerical classification index that codifies design figurative elements into categories, divisions and sections. The design search codes act as the equivalent of a filing system for paper records.

- History The beginning Way back in 1995, Graham Nelson had recently released Inform, a language for creating parser-based interactive fiction – games in the mode of Infocom’s classic text adventures from the 1980s. The idea appealed to plenty of people, but they faced a problem: they lacked the large pool of example code to learn from that users of other languages had.