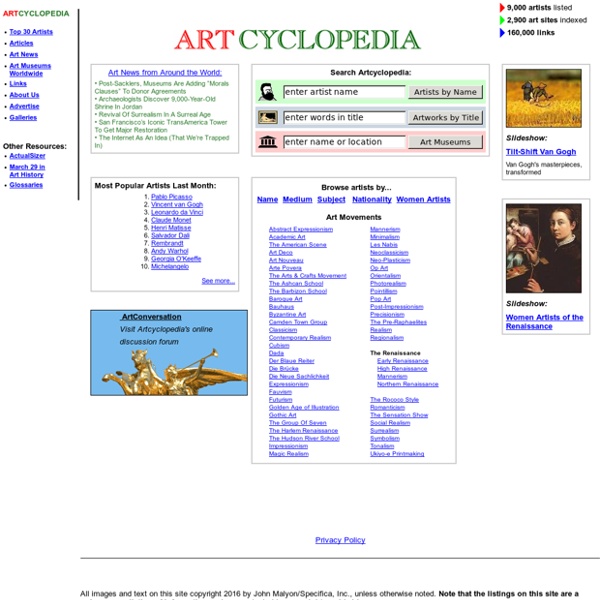 About Ars Electronica What is Ars Electronica? Art, technology, society. Since 1979, Ars Electronica has sought out interlinkages and congruities, causes and effects. 100 Ideas That Changed Art by Maria Popova From cave paintings to the internet, or how art and cultural ideology shape one another. On the heels of yesterday’s 100 Ideas That Changed Photography comes 100 Ideas That Changed Art (public library) — a succinct account of the most influential developments in the history of art, from cave paintings to the internet, compiled by art historian and broadcaster Michael Bird. From conceptual innovations like negative space (#98), color codes (#33), and street art (#94) to landmarks of communication like making books (#21), propaganda (#12), and handwriting (#24) to ideological developments like “less is more” (#30), protest (#79), and the body as surface (#9), each idea is contextualized in a 500-word essay with key visual examples. Bird writes in the introduction:

Stunning Collection of Abstract Art Paintings Top Home » Illustration • Inspiration » Stunning Collection of Abstract Art Paintings Abstract art is an interesting form of art that makes use of visual language of form, color and line. Baroque art, an introduction – Smarthistory Gian Lorenzo Bernini, View to Cathedra Petri (or Chair of St. Peter), 1647-53, gilded bronze, gold, wood, stained glass (Apse of Saint Peter’s Basilica, Vatican City, Rome) (photo: Steven Zucker, CC BY-NC-SA 2.0) Rome: From the “Whore of Babylon” to the resplendent bride of Christ When Martin Luther tacked his 95 theses to the doors of Wittenberg Cathedral in 1517 protesting the Catholic Church’s corruption, he initiated a movement that would transform the religious, political, and artistic landscape of Europe. For the next century, Europe would be in turmoil as new political and religious boundaries were determined, often through bloody military conflicts.