Hard Things You Need To Do To Be Successful 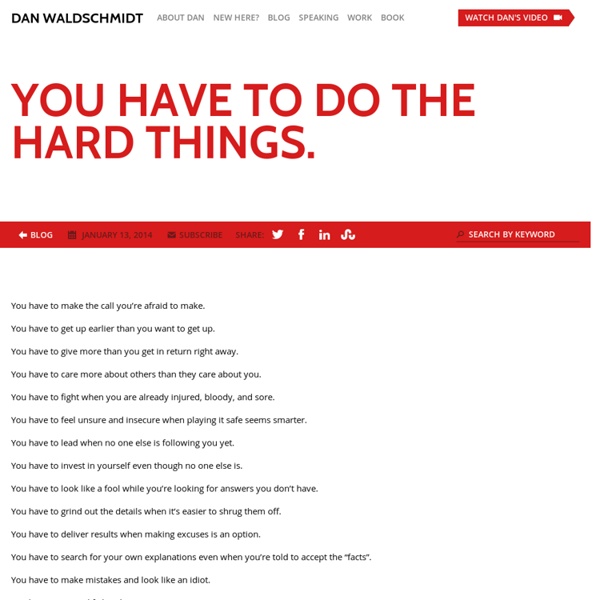 7 Ways Noise Affects Your Health We are surrounded by sound. From coworker chit-chat to the sounds of traffic outside to that tinny trace of music coming from a co-commuter’s earbuds, we often don’t consider the noise that makes up our daily environments. But the truth is that the distant jackhammers, incessant elevator bells and even the whistling and humming of the people around us can have a real effect on our health and wellness.

The GROW model Disciplines > Human Resources > Performance Management > The GROW model Goal | Reality | Options | Will | See also The GROW model is useful in performance management and coaching to help a person clarify what they want to achieve and how they will achieve it. Goal The first step is to establish and agree the goal. This answers the question 'What do I want to achieve?' Networked Knowledge and Combinatorial Creativity by Maria Popova Why creativity is like LEGO, or what Richard Dawkins has to do with Susan Sontag and Gandhi. In May, I had the pleasure of speaking at the wonderful Creative Mornings free lecture series masterminded by my studiomate Tina of Swiss Miss fame. I spoke about Networked Knowledge and Combinatorial Creativity, something at the heart of Brain Pickings and of increasing importance as we face our present information reality. The talk is now available online — full (approximate) transcript below, enhanced with images and links to all materials referenced in the talk. These are pages from the most famous florilegium, completed by Thomas of Ireland in the 14th century.

The GROW Model - Coaching your team members to improve performance - Leadership training from MindTools A Simple Process for Coaching and Mentoring Learn how to use the GROW Model, with James Manktelow & Amy Carlson. As a leader, one of your most important roles is to coach your people to do their best. By doing this, you'll help them make better decisions, solve problems that are holding them back, learn new skills, and otherwise progress their careers. On Self-Promotion You are a shameless self promoter!” he said. I can’t speak to the “shame” part, but for the rest: guilty as charged. Self-promotion may appear revolting, but it’s the only promotion that’s guaranteed in this business.

Developing a Personal Development Plan You'll find that there is no "one-size-fits-all" personal development plan. I'm going to talk about working from a personal development plan template and I will take you through a personal development plan sample. But there is no one plan that suits a person's needs and personality exactly. What you can do, however, is draw up your own plan. It takes into account your own individual knowledge and learning. FREE Interactive Learning OpenCourseware from MIT, UC Berkeley, Harvard, Yale, Stanford, U Houston, USC, UCLA, Khan Academy, NPTEL General description: Language may refer either to the specifically human capacity for acquiring and using complex systems of communication, or to a specific instance of such a system of complex communication. The scientific study of language in any of its senses is called linguistics. The approximately 3,000–6,000 languages that are spoken by humans today are the most salient examples, but natural languages can also be based on visual rather than auditory stimuli, for example in sign languages and written language. Codes and other kinds of artificially constructed communication systems such as those used for computer programming can also be called languages.

Become an Autodidact: 10 Ways to Become a Self Taught Master Some of the greatest people in history have educated themselves to a large degree using a process known as autodidacticism. This is something that’s more easily undertaken these days with the great wealth of online tools available to anyone. Whether you’ve gone to college or not, you can learn just about anything these days on your own.

How to Do What You Love January 2006 To do something well you have to like it. That idea is not exactly novel.