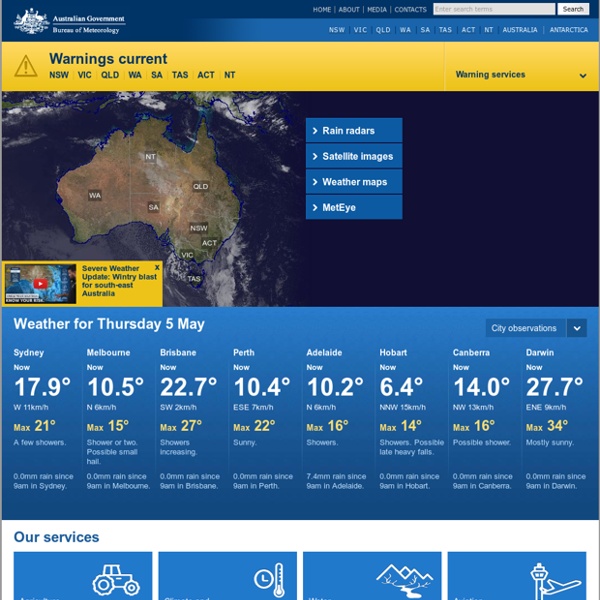 Climate map shows which countries have the same weather as Australia It's what draws millions of expats and holidaymakers year-on-year. But it seems Australia's famous climate is in fact more like scores of others around the world than first thought. Sydney is in fact more akin to Argentina's Buenos Aires while Melbourne is like Freemont in western California, according to a new analogue map. Scroll down for video An analogue map shows how Australia's different climate zones compare to those of cities around the world Graphic Film Tackles Texting while Driving It's one of the most dangerous things you can do - texting while driving. There are laws against it in more than half the states. Studies show it can increase your chances of having an accident by four times. But people keep doing it.

We don&#039;t get tornadoes here... Australians are funny about tornadoes. Most of us have a strong belief that they don't occur here. It's hard to shake. Australian climate zones Text description of Australian climate zones. The eight climate zones used in Your Home are defined by the Building Code of Australia (BCA). Each climate zone has distinctly different design and construction requirements. Within each main zone are many regional sub-zones determined by local geographic features including wind patterns and height above sea level. The Nationwide House Energy Rating Scheme (NatHERS) identifies 69 of these sub-zones, which the BCA addresses and which can be called up by postcode. Source: Australian Building Codes Board Comparing Vastly Different Body Types of Olympic Athletes New York-based photographer Howard Schatz captures the diverse range of body types of Olympic athletes. Referring to a body as an athletic build is often thought to be a perfect, rippling mass of muscle boasting a six pack, but Schatz's series reveals the wide variety of heights, widths, body shapes, and muscle mass that make up the physiques of champion athletes across an array of Olympic sports. Tall, short, heavy and light, Schatz's series clearly displays the broad spectrum of sizes and shapes that these disciplined jocks come in.

Will it rain today? How do you work it out? 00:00:03:23FLYNN:Surf's up. Boy, oh, boy! Dodly, are you coming? Bankstown, NSW - Daily Weather Observations IDCJDW2008.201807 Prepared at 05:36 UTC on Sunday 15 July 2018 Source of data Observations were drawn from Bankstown Airport AWS {station 066137}. Some cloud observations are from automated equipment; these are somewhat different to those made by a human observer and may not appear every day. You should read the important information in these notes. Other formats

Latest Capital City Observations Bankstown Issued at 5:41 pm EST Sunday 15 July 2018 (issued every 10 minutes, with the page automatically refreshed every 10 minutes) Latest Capital City Observations: Canberra | Sydney | Melbourne | Brisbane | Adelaide | Perth | Hobart | Darwin Other Formats: What are the major climate zones of the world? - Fun Kids - the UK's children's radio station Climate is all about patterns of weather. We find out more about the different climates on our planet and what causes them to be different from each other. When you hear the words “weather” and “climate” you might think they mean the same thing – but they’re quite different!