Natural Systems | Shared Resources. Greenland Is Melting Away. Amazon, data center turn hot idea into cool technology. Saving millions of kilowatt-hours a year, the innovative heat-transfer system between Amazon’s downtown high-rises and the region’s chief telecom hub could be a model for others. 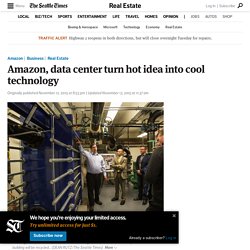 When Amazon.com’s eye-catching spheres and towers open over the next year, the heat for their thousands of tech workers and hundreds of green plants won’t be a drag on the power grid. Instead, the heat for Amazon’s high-rise Denny Triangle campus will be recycled, essentially, from the Pacific Northwest’s telecom hub on an adjacent block — an innovative partnership that could spread to other downtown buildings. Heat coming from the 34-story Westin Building Exchange will be used to warm just over 4 million square feet of development on Amazon’s four-block campus, saving 80 million kilowatt-hours over 20 years, or about 4 million kilowatt-hours a year, officials said Thursday. Failing phytoplankton, failing oxygen: Global warming disaster could suffocate life on planet Earth.

Falling oxygen levels caused by global warming could be a greater threat to the survival of life on planet Earth than flooding, according to researchers from the University of Leicester. 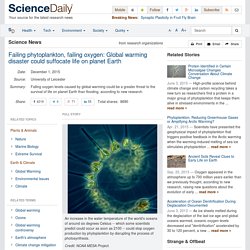 A study led by Sergei Petrovskii, Professor in Applied Mathematics from the University of Leicester's Department of Mathematics, has shown that an increase in the water temperature of the world's oceans of around six degrees Celsius -- which some scientists predict could occur as soon as 2100 -- could stop oxygen production by phytoplankton by disrupting the process of photosynthesis. Professor Petrovskii explained: "Global warming has been a focus of attention of science and politics for about two decades now. A Carbon Tax for Steak May Be the Best Way to Get People to Eat Less Meat. From renewable energy to carbon sequestration to cap and trade, a lot of different ideas for arresting the change under way in the climate are going to be discussed at the upcoming international climate talks in Paris. 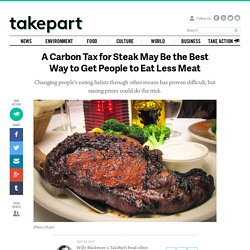 There is, however, one carbon-producing issue that the international group would appear to deem somewhat marginal—only 21 out of 120 national plans included it in their reduction goals—but that could lead to significant cuts in emissions: meat consumption. The problem is, achieving those reductions would require a huge upending of deep-seated habits and cultural norms the world over. The meat industry accounts for 15 percent of emissions globally—equal to the amount of greenhouse gases generated by the world’s cars. The Koala in the Coal Mine. GUNNEDAH, Australia—Scrambling up a rock-strewn hill, I crane my neck and scan a row of trees for koalas. 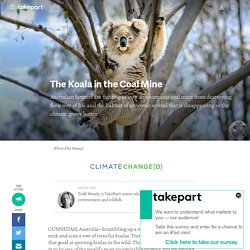 Truth be told, I’ve never been all that good at spotting koalas in the wild. The cartoon-cute marsupial may be one of the world’s most recognizable animals, but try finding one silently snoozing 40 feet off the ground in a leafy eucalyptus tree among hundreds scattered across this former farm in the Liverpool Plains, a fertile agriculture district 250 miles northwest of Sydney. Koalas, which sleep up to 22 hours a day, don’t snore or do much of anything else that would attract attention. Borrowing From Solar and Chip Tech to Make Diamonds Faster and Cheaper. Photo Just a decade ago, Silicon Valley had high hopes of becoming a vibrant manufacturing center by making solar panels. 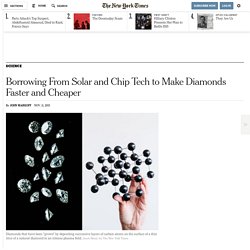 But price competition from abroad, particularly from China, quickly dashed those dreams. Coal Exports and the Terrible, Horrible, No Good, Very Bad Week. Arsenic found in many US red wines. A new University of Washington study that tested 65 wines from America’s top four wine-producing states — California, Washington, New York and Oregon — found all but one have arsenic levels that exceed what’s allowed in drinking water. 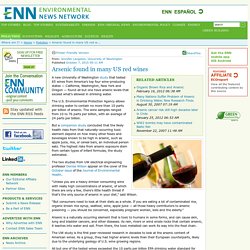 The U.S. Environmental Protection Agency allows drinking water to contain no more than 10 parts per billion of arsenic. The wine samples ranged from 10 to 76 parts per billion, with an average of 24 parts per billion. But a companion study concluded that the likely health risks from that naturally-occurring toxic element depend on how many other foods and beverages known to be high in arsenic, such as apple juice, rice, or cereal bars, an individual person eats. The highest risks from arsenic exposure stem from certain types of infant formulas, the study estimated. The two studies from UW electrical engineering professor Denise Wilson appear on the cover of the October issue of the Journal of Environmental Health. Red wine image via Shutterstock. Indonesia's Wildfires Are as Bad as Some of the Planet's Worst Air Polluters. Cities Are Banning Cars in Favor of Cyclists and Pedestrians to Fight Choking Pollution.

It’s no secret that traffic contributes to poor air quality in urban centers, but it’s now clear that even just one car-free day, such as Los Angeles’ CicLAvia event, can significantly improve the quality of what you’re breathing. 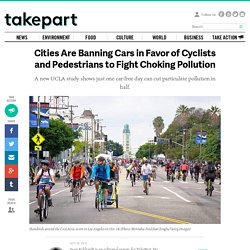 Hosted by the nonprofit of the same name in partnership with Los Angeles County Metro and the mayor’s office, a CicLAvia is a one-day event in which streets in a neighborhood of Los Angeles are closed to traffic and opened for cyclists and pedestrians. The last CicLAvia to take place in Downtown Los Angeles was in October 2014; it cut particulate pollution in half compared with normal traffic days, according to a study from UCLA’s Fielding School of Public Health that was published on Monday in the journal Environmental Pollution. There was even a 12 percent drop in pollution in surrounding communities and streets that were still open to vehicles, researchers found.

As the trend catches on, more cities are experimenting with going car-free. A Silent Scourge Is Wiping Out Crops in Africa. Nation's water challenges are many, but so are the solutions. This Friday, Sept. 4, 2015 photo shows construction of the Carlsbad, Calif., desalination plant between Interstate 5 and the Pacific Ocean. 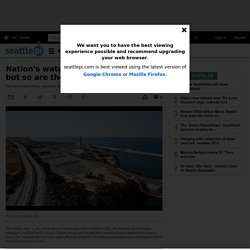 Climate change and drought have stretched water supplies from coast to coast. The vast majority of 50 state water officials surveyed by the federal government expect shortages to affect them over the next 10 years. The Cost of a Crab Dinner: Dead Whales. Fishing gear is entangling whales at record rates along the West Coast of the United States, and now environmental groups are urging regulators to take action to keep the giant marine mammals safe. 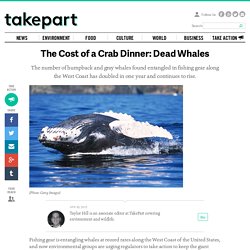 The number of whale entanglements reported for gray and humpback whales nearly doubled—from 16 incidents in 2013 to 31 last year—killing seven of the animals in 2014, according to data obtained from the National Marine Fisheries Service by environmental group the Center for Biological Diversity. Twenty-five entanglements have been reported in just the first four months of 2015. The Eco-Friendly Approach to Cancer Sticks: Cigarette Recycling Comes to the U.K.

With smoking increasingly banned in workplaces, bars, restaurants—and even inside tobacco companies themselves—in the developed world, it’s not too unusual to see someone standing outside, puffing on a cancer stick. 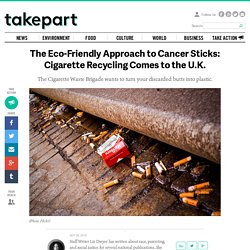 But when that person is finished getting a nicotine fix, what does he or she do with the cigarette? The Cigarette Waste Brigade hopes the individual will recycle it instead of flicking it onto a sidewalk. The cleverly named antilitter effort, which is the brainchild of TerraCycle, a Trenton, New Jersey–based recycling company, spread across the pond to the United Kingdom on Monday. TerraCycle teams up with tobacco companies around the world on its efforts—cigarette manufactures want you to smoke but at least be an eco-friendly smoker, apparently. Over the past three years, TerraCycle has partnered with cities such as New Orleans and Seattle but the latest initiative is its first significant foray into the U.K. A Sushi Master’s Lament—and the One Fish You Should Always Avoid. When a famous chef speaks out to warn the dining public about the dire straits of the world’s fisheries, that’s hardly news. “Sustainable seafood” probably ranks just behind “wild-caught” as the descriptor of choice on the menu of your average haute eatery these days.

But when that chef is the most renowned sushi master on the planet, people listen. “I can’t imagine at all that sushi in the future will be made of the same materials we use today,” Jiro Ono said in an appearance this week. “I told my young men three years ago, sushi materials will totally change in five years. Improving Our Water Efficiency: The Coca-Cola Company. Goal: By 2020, improve water efficiency in manufacturing operations by 25% compared with a 2010 baseline. Vertical #farming coming soon to an #urban area near you with the promise #organic produce using 95% less water. This facility will grow 22 crops per year with the help of LED lighting and a controlled environment.

As documentaries like Food Inc. have conveyed, large-scale agricultural farming is not a sustainable method of producing food for the world’s growing population. But vertical farming might be… Here's how new buildings can actually help salmon. The Key to Saving Billions of Gallons of Water is Sitting in Your Shower.

Making a Living on the Bayou After a Decade of Disasters. SHELL BEACH, La. Vulcan Real Estate Makes News by Going Salmon Safe. Tuesday, 07 July, 2015 13:31Last Updated on Tuesday, 07 July, 2015 13:32Written by Stewardship Partners On June 8th, 2015, Vulcan Inc. announced its Commitment to Action with the Clinton Foundation’s Clinton Global Initiative (CGI) for urban watershed protection and restoration through sustainable development practices that align with Salmon-Safe environmental certification. The public announcement occurred in early June at the CGI America 2015 conference in Denver, Colo., which brings together various leaders from across industries for a think-tank style multi-day engagement focused on developing solutions for economic growth.

At CGI America, Ada M. Healey, vice president of real estate for Vulcan Inc., had the opportunity to speak with global leaders about Vulcan’s commitment to serve as pilot developer for Salmon-Safe’s new developer accreditation initiative. The Earthquake That Will Devastate Seattle.

The Pacific Northwest is Doomed. Feeling Down? Take a Walk in the Woods. Microplastic Particles Move Up Marine Food Chain on B.C. Coast. Plastic fibres and particles in West Coast waters are being consumed and passed up the food chain by tiny marine creatures that apparently mistake them for food, according to a new study from the Vancouver Aquarium Marine Science Centre. New Fund Will Help More Seattle Residents Build Rain Gardens. Climate Change Is Helping One Weird Pest Destroy More Crops. Your Fresh Fish Dinner Now Comes with a Dose of Prescription Drugs.

California Shows the World How to Stave Off a Climate Catastrophe. Can Technology Save Africa’s Forests? Changing the Conversation About the Growth of Pacific Northwest Cities. We're Pumping So Much Groundwater That It's Causing the Oceans to Rise. Solar Streets: New Roadways May Ditch Asphalt for Energy-Generating Sunshine ... Learning Resilience From Peru’s Ancient Civilizations. Boston’s Winter From Hell. This map shows where your state’s oysters are in trouble.

These 6 Countries Are Responsible For 60% Of CO2 Emissions. Loving the Puget Sound to Death. Organic Food Reduces Pesticide Exposure. Domtar Brings Transparency to the Pulp and Paper Industry. 2014 Was the Hottest Year—Ever. A Green Light for Using Rain Barrel Water on Garden Edibles. Stormwater Solutions: Curbing Toxic Runoff. The Surprising Source of Pollution Trashing San Diego’s Beaches. Saving Our Soils and Climate with Biochar. These Floating Sea Trees Could Bring Wildlife Back to Big Cities. Interactive: Carbon Emissions Past, Present and Future. Breaking Down Bioplastics. Will a Global Roundtable for Sustainable Beef Matter? Are We Missing the Big Picture on Climate Change?