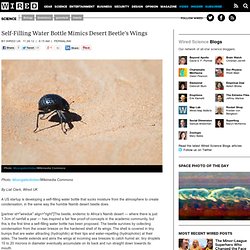 [partner id="wireduk" align="right"]The beetle, endemic to Africa’s Namib desert — where there is just 1.3cm of rainfall a year — has inspired a fair few proof-of-concepts in the academic community, but this is the first time a self-filling water bottle has been proposed. The beetle survives by collecting condensation from the ocean breeze on the hardened shell of its wings. The shell is covered in tiny bumps that are water attracting (hydrophilic) at their tips and water-repelling (hydrophobic) at their sides.

NBD Nano, made up of two biologists, an organic chemist and a mechanical engineer, is building on past studies that constructed structurally superior synthetic copies of the shell. Source: Wired.co.uk. Groundwater footprint reveals unsustainable consumption. Waste management 2030+ Flushed pharmaceuticals fueling fearless fish. 14 February 2013 by Will Parker Widely prescribed anxiety-moderating drugs such as Serepax are persisting through wastewater treatment plants after being excreted and modifying fish behaviors, making them bolder and avoid other fish. 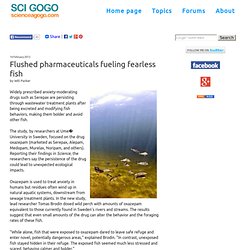 The study, by researchers at Ume University in Sweden, focused on the drug oxazepam (marketed as Serepax, Alepam, Medopam, Murelax, Noripam, and others). Reporting their findings in Science, the researchers say the persistence of the drug could lead to unexpected ecological impacts. Oxazepam is used to treat anxiety in humans but residues often wind up in natural aquatic systems, downstream from sewage treatment plants. "While alone, fish that were exposed to oxazepam dared to leave safe refuge and enter novel, potentially dangerous areas," explained Brodin. The fish that were given oxazepam during the study also became anti-social, distancing themselves from other perch and putting themselves at greater risk of predation. Massachusetts Town Bans Plastic Water Bottles. January 4, 2013 April Flowers for redOrbit.com – Your Universe Online On January 1st, Concord, Massachusetts enacted a ban on the sale of plastic bottles of water smaller than one liter. 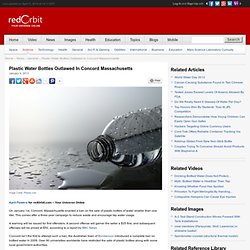 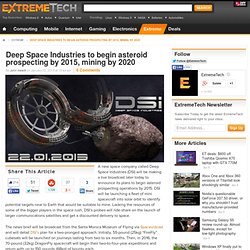 DSI will be launching a fleet of mini spacecraft into solar orbit to identify potential targets near to Earth that would be suitable to mine. Lacking the resources of some of the bigger players in the space rush, DSI’s probes will ride-share on the launch of larger communications satellites and get a discounted delivery to space. The news brief will be broadcast from the Santa Monica Museum of Flying via Spacevidcast and will detail DSI’s plan for a two-pronged approach. Initially, 55-pound (25kg) “FireFly” cubesats will be launched on journeys lasting from two to six months.

Then, in 2016, the 70-pound (32kg) DragonFly spacecraft will begin their two-to-four-year expeditions and return with up to 150 pounds (68kg) of bounty each. Several space luminaries have begun to coalesce around DSI’s bold initiative. For a truly sustainable world, we need zero waste cities. The current state of worldwide urban development is depressing. We are not moving towards environmentally sustainable design and reduced consumption quickly enough.

There have been dire warnings about the implications of global climate change and a strain on the full range of resources from fuel to food. But there are neither regulations nor political will to make the changes to meet the growing challenges for urban communities for the next 20 years and beyond. How much longer can we sustain the high-consumption lifestyle we are used to? Who’s consuming?