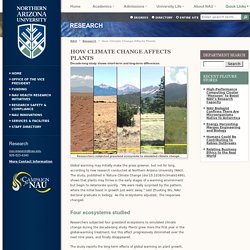 The study, published in Nature Climate Change (doi:10.1038/nclimate1486), shows that plants may thrive in the early stages of a warming environment but begin to deteriorate quickly. Climate Change Means One World's Death and Another's Birth. A few years ago in a lab in Panama, Klaus Winter tried to conjure the future. 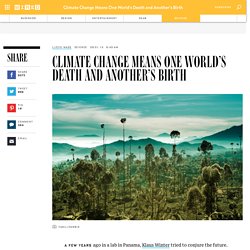 A plant physiologist at the Smithsonian Tropical Research Institute, he planted seedlings of 10 tropical tree species in small, geodesic greenhouses. Some he allowed to grow in the kind of environment they were used to out in the forest, around 79 degrees Fahrenheit. Others, he subjected to uncomfortably high temperatures. Still others, unbearably high temperatures—up to a daily average temperature of 95 F and a peak of 102 F. That’s about as hot as Earth has ever been. Guest Blog: How the nature of corporate climate change risks differ from natural capital risks. News & Blog | BlogPosted 07.08.15 The Obama Administration’s new ambitious target to reduce greenhouse gasses provides an example of a future where greenhouse gas emissions (GHGs) are increasingly likely to become financial material for the private sector. However, while natural capital risks can also become financial material for companies, it is important to distinguish how they differ from those corporate climate risks. How climate change risks are becoming material: In the long run the expected effects of more frequent and/or more volatile floods, droughts and storms will affect companies in the real economy as well as lenders, investors and insurers substantially.

Such operational risks may cause losses to the global economy of US$ 4.2 trillion in discounted, present value terms out of total assets of US$ 143 trillion, according to value at risk (VaR) research by the Economist Intelligence Unit. How do these risks differ from corporate natural capital risks? The staggeringly large benefits of conserving nature. A bird flies over the sensitive ecological landscape of the Everglades National Park home to many endangered and rare plants on March 16, 2015 in Miami. 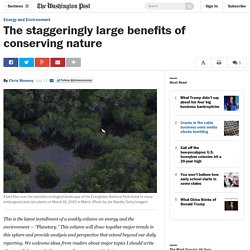 (Photo by Joe Raedle/Getty Images) It's the Planet Stupid!: Capitalism and The Destruction of the Commons. Putting a Price Tag on Nature’s Defenses. Photo After Hurricane Katrina devastated New Orleans, the United States Army Corps of Engineers got to work on a massive network of levees and flood walls to protect against future catastrophes. 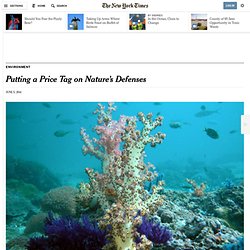 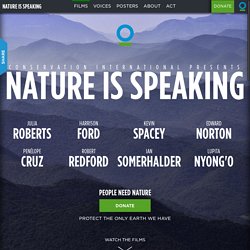 Banking Nature. Or cashing in on the destruction of nature. A new documentary film, Banking Nature looks at the Brave New World of species banking, biodiversity offsets, wetlands credits, ecosystem markets, and putting a price on nature. 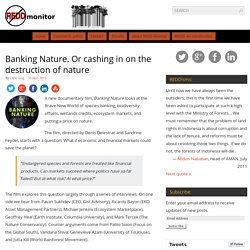 The film, directed by Denis Delestrac and Sandrine Feydel, starts with a question: What if economic and financial markets could save the planet? “Endangered species and forests are treated like financial products. Can markets succeed where politics have so far failed? But at what risk? At what price?” EY-Accounting-for-natural-capital. Geo-engineering: Climate fixes 'could harm billions' 25 November 2014Last updated at 20:12 ET By David Shukman Science editor, BBC News. 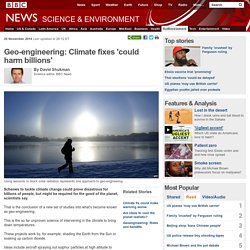 Invertebrate populations have dropped by 45 percent in the last four decades. Much has been said about the loss of bird, mammal, reptile, and amphibian species around the world. 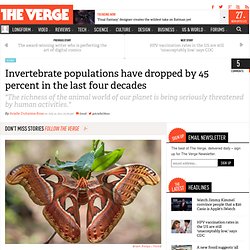 By current estimates, at least 322 species have gone extinct in the last 500 years. And researchers estimate that 16 to 33 percent of the world’s vertebrate species — animals with developed spinal cords — are currently threatened or endangered. Does Monetization Equal Integrated Reporting? Image credit: Free-Picture.net By now, most readers of these pages will have noticed the emergence of social and environmental monetization schemes intended to quantify in financial terms the otherwise non-financial impacts of organizations. 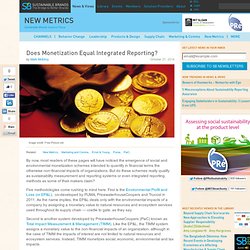 Put a price on nature? We must stop this neoliberal road to ruin. This is the transcript of George Monbiot's SPERI Annual Lecture, hosted by the Sheffield Political Economy Research Institute at the University of Sheffield. Ladies and gentlemen, we are witnessing the death of both the theory and the practice of neoliberal capitalism. This is the doctrine which holds that the market can resolve almost all social, economic and political problems. "Through a Forest Wilderness" As thought-provoking as ever, George Monbiot voiced his concerns in his Guardian column yesterday on attempts by environmentalists to put a price on the value of the natural world. He contends that “those who seek to reduce nature to a column of figures play to an agenda that ignores its inherent value – and seeks to destroy it“. He criticises people who he describes as essentially well-meaning, but mis-guided, in seeking to monetise nature so that nothing is valued for its own sake, and “place and past and love and enchantment will have no meaning“.

Another respected campaigner, Tony Juniper, answered some of George’s concerns, arguing that “keeping nature out of the economic argument presents more dangers than benefits“.