European Commission - Science for Environment Policy. Making Energy From Cheese Waste And Cow Poop. It sounds like an incredibly smelly--and disgusting--proposition, but some researchers think that a mix of cheese whey (a cheese-making byproduct) and liquid cow manure may come together to make a high-quality biogas. 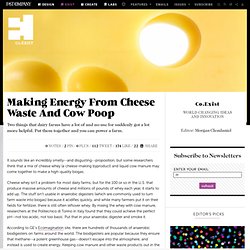 Cheese whey isn’t a problem for most dairy farms, but for the 100 or so in the U.S. that produce massive amounts of cheese and millions of pounds of whey each year, it starts to add up. The stuff isn’t usable in anaerobic digesters (which are commonly used to turn farm waste into biogas) because it acidifies quickly, and while many farmers put it on their fields for fertilizer, there is still often leftover whey. By mixing the whey with cow manure, researchers at the Politecnico di Torino in Italy found that they could achieve the perfect pH--not too acidic, not too basic. N-print. Catan: Oil Springs. Solve water problems or forget growth, India told. Use it while you have it: Water scarcity is an issue on the horizon - The Parthenon - Marshall University.

Charles Fishman on our hidden water use. We might not be aware of how much water we use every day. That’s according to Charles Fishman, investigative journalist and contributing editor at Fast Company. Fishman interviewed dozens of water experts around the world for his book, The Big Thirst. He told EarthSky: Especially as people rise to the middle class, and in developed nations, there’s lots of hidden water use. An example is, in the United States, the average person, over the course of a day, uses 99 real gallons of water. That is, 99 gallons of water for cooking, cleaning, and bathing.

Photo Credit: Argonne National Library The electricity that each American uses just at home, just residential electricity per person, that electricity requires 250 gallons of water a day. Fishman said challenges to our water supply will grow this century because of the effects of climate and a growing population. As climate change takes hold, and in places with water scarcity, there’s no question about changing rainfall patterns. Eight radical solutions for the water shortage. 4 April 2012Last updated at 07:50 ET By Vanessa Barford & Lauren Everitt BBC News Magazine With hosepipe bans imminent, there is growing concern over drought in parts of the UK. 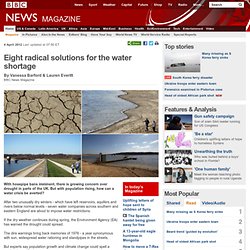 But with population rising, how can a water crisis be averted? After two unusually dry winters - which have left reservoirs, aquifers and rivers below normal levels - seven water companies across southern and eastern England are about to impose water restrictions. If the dry weather continues during spring, the Environment Agency (EA) has warned the drought could spread. The dire warnings bring back memories of 1976 - a year synonymous with sun, widespread water rationing and standpipes in the streets. Continue reading the main story Sound familiar? Personal N Footprint Calculator. Selling water to England is a pipe dream, say experts. From Sunday Herald, 18 March 2012 Alex Salmond’s plan to sell water to England has run into a barrage of criticism from experts, who warn that it would be impractical, polluting and horrendously expensive. 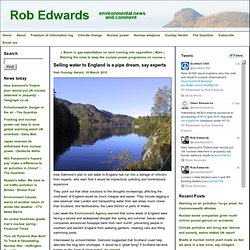 They point out that other solutions to the droughts increasingly afflicting the southeast of England would be much cheaper and easier. They include digging a new reservoir near London and transporting water from wet areas much closer than Scotland, like Northumbria, the Lake District or parts of Wales. Last week the Environment Agency warned that some areas of England were facing a severe and widespread drought this spring and summer. Seven water companies announced hosepipe bans from next month, preventing people in southern and eastern England from watering gardens, cleaning cars and filling swimming pools. Interviewed by schoolchildren, Salmond suggested that Scotland could help alleviate the long term shortages.

“The energy costs of moving water are phenomenal. Illegal logging makes billions for gangs, report says. 20 March 2012Last updated at 21:11 ET By Richard Black Environment correspondent Illegal logging has been blamed for a number of flooding incidents, notably in the Philippines Illegal logging generates $10-15bn (£7.5-11bn) around the world, according to new analysis from the World Bank. 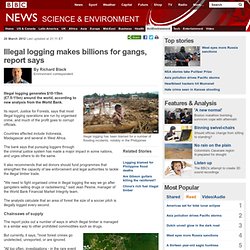 Its report, Justice for Forests, says that most illegal logging operations are run by organised crime, and much of the profit goes to corrupt officials. Countries affected include Indonesia, Madagascar and several in West Africa. The bank says that pursuing loggers through the criminal justice system has made a major impact in some nations, and urges others to do the same. It also recommends that aid donors should fund programmes that strengthen the capacity of law enforcement and legal authorities to tackle the illegal timber trade. 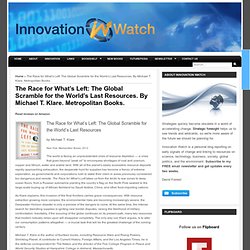