Homosexuality Might Develop in the Womb Due to Epigenetic Changes. Credit: Shutterstock/Anton Gvozdikov; University of California.

According to a newly released hypothesis, homosexuality might not lie in DNA itself. Instead, as an embryo develops, sex-related genes are turned on and off in response to fluctuating levels of hormones in the womb, produced by both mother and child. This benefits the unborn child, however if these epigenetic changes persist once the child is born, and has children of its own, some of these offspring may be homosexual. The scientists published their findings in the journal The Quarterly Review of Biology.

Evolutionary geneticists propose that this is the reason why homosexuality didn’t fade away due to evolutionary pressure. Homosexuality isn’t just tied to the human species. Testosterone doesn’t explain everything. Epigenetic changes involve alterations in the proteins that bind together long strands of DNA and can be handed down to offspring. It’s Beginning to Smell a Lot Like Christmas: The Neuroscience of Our Nostalgia. The views expressed are those of the author and are not necessarily those of Scientific American. 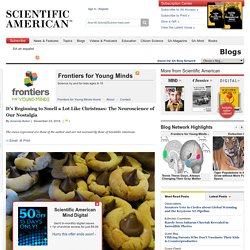 Traditional cookies ever bring back your childhood memories? Science knows why (credit: Amanda Baker) Have you ever smelled something so familiar that it felt like you were transported back through time into one of your earlier memories? Have freshly baked cookies, your grandmother’s chili sauce, or a specific brand of sunscreen after a long winter actually affected the way you feel? Stanford researcher: Hallucinatory 'voices' shaped by local culture. By Clifton B. 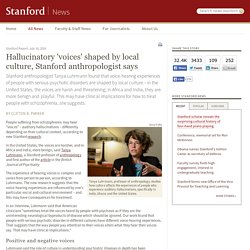 Parker Steve Fyffe Tanya Luhrmann, professor of anthropology, studies how culture affects the experiences of people who experience auditory hallucinations, specifically in India, Ghana and the United States. People suffering from schizophrenia may hear "voices" – auditory hallucinations – differently depending on their cultural context, according to new Stanford research. In the United States, the voices are harsher, and in Africa and India, more benign, said Tanya Luhrmann, a Stanford professor of anthropology and first author of the article in the British Journal of Psychiatry. The experience of hearing voices is complex and varies from person to person, according to Luhrmann.

In an interview, Luhrmann said that American clinicians "sometimes treat the voices heard by people with psychosis as if they are the uninteresting neurological byproducts of disease which should be ignored. Positive and negative voices 'Voices as bombardment' Individual self vs. the collective. What would Earth's skies look like with Saturn's rings? Posted By Jason Davis Topics: pretty pictures, art. 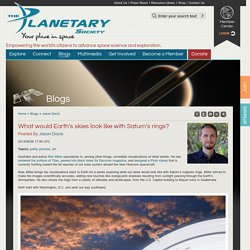 Debate on the evolution of sex (Robert Wright vs. Christopher Ryan. Dimensions Home. A film for a wide audience! 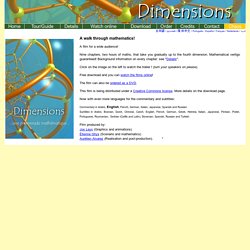 Nine chapters, two hours of maths, that take you gradually up to the fourth dimension. Mathematical vertigo guaranteed! Background information on every chapter: see "Details". Click on the image on the left to watch the trailer ! (turn your speakers on please). Free download and you can watch the films online!

The film can also be ordered as a DVD. This film is being distributed under a Creative Commons license. Now with even more languages for the commentary and subtitles: Commentary in Arabic, English, French, German, Italian, Japanese, Spanish and Russian. Film produced by: Jos Leys (Graphics and animations) Étienne Ghys (Scenario and mathematics) Aurélien Alvarez (Realisation and post-production) Flatland: A romance of many dimensions. With Illustrations by the Author, A SQUARE (Edwin A. 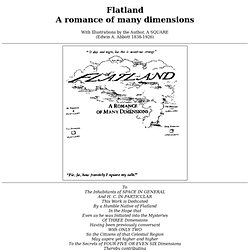 Abbott 1838-1926) To The Inhabitants of SPACE IN GENERAL And H. C. IN PARTICULAR This Work is Dedicated By a Humble Native of Flatland In the Hope that Even as he was Initiated into the Mysteries Of THREE Dimensions Having been previously conversant With ONLY TWO So the Citizens of that Celestial Region May aspire yet higher and higher To the Secrets of FOUR FIVE OR EVEN SIX Dimensions Thereby contributing To the Enlargement of THE IMAGINATION And the possible Development Of that most rare and excellent Gift of MODESTY Among the Superior Races Of SOLID HUMANITY The first objection is, that a Flatlander, seeing a Line, sees something that must be thick to the eye as well as long to the eye (otherwise it would not be visible, if it had not some thickness); and consequently he ought (it is argued) to acknowledge that his countrymen are not only long and broad, but also (though doubtless in a very slight degree) thick or high.

Science & Environment. Imagine if you could see time laid out in front of you, or surrounding your body. And you could physically point to specific dates in space. Important dates might stand out - birthdays, anniversaries. And you could scan a visible timeline - to check if you were available - whenever you made plans. No actual diary necessary. According to Julia Simner, a psychologist from the University of Edinburgh, there is a reasonable chance you can. Dr Simner studies synaesthesia - a condition caused by an unusually high number of connections between two areas of the brain's sensory cortex, making two senses inseparable. Synaesthetes, as they are known, have experiences that might seem extremely strange to any non-synaesthete.