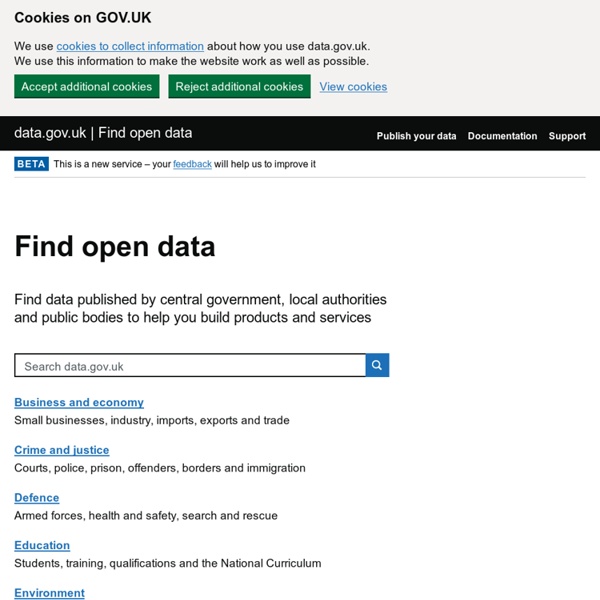 Trees could be the ultimate in green power - tech - 10 September 2009 Shoving electrodes into tree trunks to harvest electricity may sound like the stuff of dreams, but the idea is increasingly attracting interest. If we can make it work, forests could power their own sensor networks to monitor the health of the ecosystem or provide early warning of forest fires. Children the world over who have tried the potato battery experiment know that plant material can be a source of electricity. In this case, the energy comes from reduction and oxidation reactions eating into the electrodes, which are made of two different metals – usually copper and zinc.

Government data PDF enthusiasts will be 'dealt with', says Maude Nearly every major department could be in breach of the government's own open data license, after Cabinet Office minister Francis Maude committed to force them to publish their spending data in transparent formats today. The Minister, in charge of the government's transparency drive, said that departments who continue to publish the data in their annual reports in PDF format would be 'dealt with'. "Data in annual reports in PDF, that is in breach of our own open government license - and we will deal with that," he said The Open government License commits the government to publishing data in machine readable formats - spreadsheet files such as CSV or excel. Every year each department publishes its annual report including comprehensive total figures for each area of spending. The reports are the final word in each department's finances and are laid before parliament in July, according to Treasury best practice rules.

Base de données dynamique des systèmes judiciaires européens The comparison of quantitative data from different countries with various geographical, economic and legal situations is a delicate task. It should be approached with great caution by the experts writing the report and by the readers consulting it, interpreting it, and analysing the information it contains. In order to compare the various states and their systems, the particularities of the systems, which might explain differences in data from one country to another, must be borne in mind (different judicial structures, the way of the courts organisation, use of statistical tools to evaluate the systems, etc.). Plastic converts raindrops to electricity The pitter-patter of raindrops on a plastic panel could be a new source of electricity thanks to work done by researchers at France’s Atomic Energy Commission (CEA) in Grenoble. While humans have harnessed the power of rain for thousands of years, energy is usually extracted from rainwater as it flows downhill in a river or stream. Now, Jean-Jacques Chaillout and colleagues have created a panel that converts the impact energy of falling raindrops directly into electricity. Their device uses a plastic called polyvinylidene fluoride (PVDF) that vibrates when struck by raindrops.

Application Development Trends: Using Government Data By CDATABy John Moore for Digital Innovation Gazette Recent initiatives have set out to make government data more readily available to information consumers -- including app developers. The White House kicked off the federal Open Government Initiative in late 2009. The program calls for agencies to “expand access to information by making it available online in open formats.” Individual efforts under the open government umbrella include Data.gov, a clearing house of sorts that at press time offered 378,000-plus raw and geospatial data sets, along with 103 government mobile apps. Open data received a reinforcing push earlier this year with the publication of the Federal Digital Strategy.

Online Data - ESRI ArcGIS Online Map Services Use these map services to create web maps in ArcGIS Online, or access them directly from ArcGIS for Desktop and ArcGIS for Server. Developers can access them through ArcGIS Web Mapping APIs to build web applications. Basemaps— World Imagery, World Street Map, World Topographic Map, World Shaded Relief, World Physical Map, World Terrain Base, USA Topographic Maps, Ocean Basemap, Light Gray Canvas Map, and National Geographic World Map. Where to Find Open Data on the Web Today, a story on Techmeme caught our eye. It was entitled "We Need a Wikipedia for data," and the article, written by X-Googler Bret Taylor, discussed the difficulty of finding open data sets on the internet, something which could spur innovation, allowing programmers to build new applications the likes of which have never been seen before. What was interesting about this story, in addition to, obviously, the concept of a Data Wiki itself, was the amazing and insightful commentary around this concept, not just on the blog, but all over the net, something which led to the discovery of some pretty good data sources that are already available.