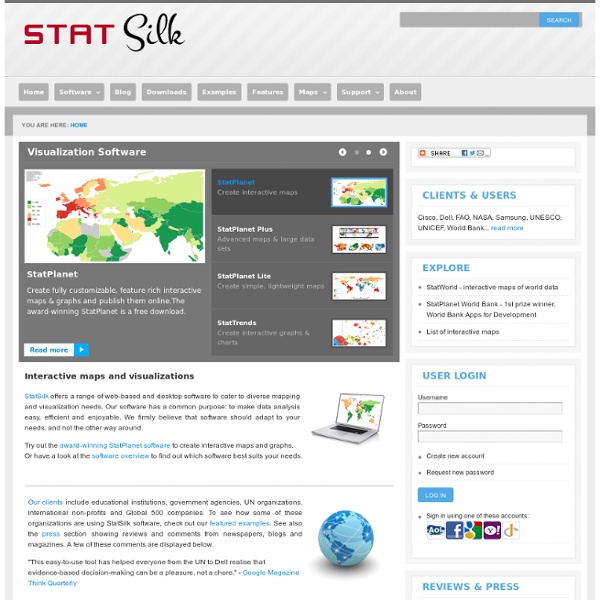 40 maps that explain the world By Max Fisher By Max Fisher August 12, 2013 Maps can be a remarkably powerful tool for understanding the world and how it works, but they show only what you ask them to. So when we saw a post sweeping the Web titled "40 maps they didn't teach you in school," one of which happens to be a WorldViews original, I thought we might be able to contribute our own collection. Some of these are pretty nerdy, but I think they're no less fascinating and easily understandable. A majority are original to this blog, with others from a variety of sources. Online Charts Builder Hohli Online Charts Builder New version: Try new version of Charts Builder, it based on new Google Charts API Load From Image URL:

Five-Minute Film Festival: 8 Interactive Video Tools for Engaging Learners It's no secret that I am a passionate advocate for using video in the classroom. When used well, videos can help students make connections to people and ideas beyond their usual frame of reference. That's why I've been really excited to see a wave of new (and mostly free or low-cost!) tech tools recently that enable teachers to take favorite clips and make them more valuable for educational use. Whether you use videos to flip your classroom or you just appreciate the power of video to engage kids, maybe one of the tools in my playlist below will help you go deeper in 2014. Video Playlist: Tools to Enhance Videos for Learning 5 Amazing Towns on Perilous Cliff Sides Spot Cool Stuff loves a good cliff-side town. There’s something about them that’s romantic, daring and a little impossible. Here are five of our favorites places where no one with vertigo would want to live: Castellfollit de la Roca, Spain

Alpage ALPAGE (diachronic analysis of the Paris urban area: a geomatic approach) is a research program coordinated by Hélène Noizet (LAMOP), which is supported by the ANR. Based on the association of 4 laboratories, and collaboration of many partners, it brings together some twenty researchers or academics in humanities, social sciences and communication studies. These historians, geomaticians and computer scientists are building a geographic information system (GIS) about the pre-industrial Parisian area.

46 Tools To Make Infographics In The Classroom Infographics are interesting–a mash of (hopefully) easily-consumed visuals (so, symbols, shapes, and images) and added relevant character-based data (so, numbers, words, and brief sentences). The learning application for them is clear, with many academic standards–including the Common Core standards–requiring teachers to use a variety of media forms, charts, and other data for both information reading as well as general fluency. It’s curious they haven’t really “caught on” in schools considering how well they bridge both the old-form textbook habit of cramming tons of information into a small space, while also neatly overlapping with the dynamic and digital world. So if you want to try to make infographics–or better yet have students make them–where do you start?

Interactive Map of Europe, Europe Map with Countries and Seas Europe is the second smallest of the inhabited continents. It is a part of the Eurasian land mass that includes Europe, Asia, Asia Minor and the Arabian Peninsula. As many large islands east and south of Asia are usually included in Asia, the Eurasian land mass extends from Iceland to New Guinea, from the Atlantic to the Pacific and from the Arctic to the Indian Oceans. Gridded Population of the World - GPW v3 Introduction Note: "Gridded Population of the World, v4" is now available and supersedes GPWv3. GPWv4 provides gridded population estimates with an output resolution of 30 arc-seconds (approximately 1 km at the equator) for the years 2000, 2005, 2010, 2015, and 2020 based on the results of the 2010 round of censuses, which occurred between 2005 and 2014. For more details about GPWv4 and to access the new data see GPWv3 depicts the distribution of human population across the globe.

Top 25 Informative Maps That Teach Us Something Uniquely Different About the World Population of Southeast Asia Compared to the Rest of the World Maps can be great guides for more than just finding routes for traveling. They often provide insight on the rest of the world. The Map Of Native American Tribes - kplu Finding an address on a map can be taken for granted in the age of GPS and smartphones. But centuries of forced relocation, disease and genocide have made it difficult to find where many Native American tribes once lived. Aaron Carapella, a self-taught mapmaker in Warner, Okla., has pinpointed the locations and original names of hundreds of American Indian nations before their first contact with Europeans. As a teenager, Carapella says he could never get his hands on a continental U.S. map like this, depicting more than 600 tribes — many now forgotten and lost to history. Now, the 34-year-old designs and sells maps as large as 3 by 4 feet with the names of tribes hovering over land they once occupied.

Atlases of social inequalities Data and evidence Equity in health project Interactive atlases Atlases of social inequalities Atlases of social inequalities Atlases of inequalities allow visualization of the difference between a target value and the value in a region or group of regions. The Obsessively Detailed Map of American Literature's Most Epic Road Trips The above map is the result of a painstaking and admittedly quixotic effort to catalog the country as it has been described in the American road-tripping literature. It includes every place-name reference in 12 books about cross-country travel, from Mark Twain’s Roughing It (1872) to Cheryl Strayed’s Wild (2012), and maps the authors’ routes on top of one another. You can track an individual writer’s descriptions of the landscape as they traveled across it, or you can zoom in to see how different authors have written about the same place at different times.

23 maps and charts on language by Dylan Matthews on April 15, 2015 "The limits of my language," the philosopher Ludwig Wittgenstein once posited, "mean the limits of my world." Explaining everything within the limits of the world is probably too ambitious a goal for a list like this.