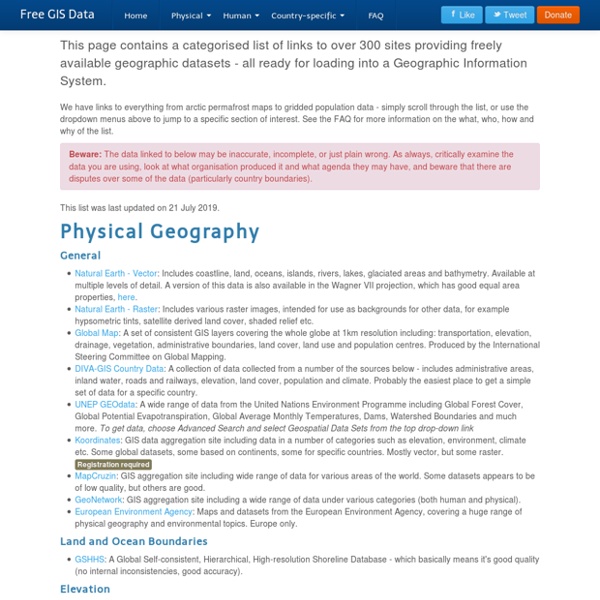 This page contains a categorised list of links to over 300 sites providing freely available geographic datasets - all ready for loading into a Geographic Information System. We have links to everything from arctic permafrost maps to gridded population data - simply scroll through the list, or use the dropdown menus above to jump to a specific section of interest. See the FAQ for more information on the what, who, how and why of the list. Beware: The data linked to below may be inaccurate, incomplete, or just plain wrong. As always, critically examine the data you are using, look at what organisation produced it and what agenda they may have, and beware that there are disputes over some of the data (particularly country boundaries). This list was last updated on 10 April 2014.

Updated Snow GIS data « Robin's Blog September 25, 2012 A while back I released a GIS dataset containing Snow’s Cholera analysis data in modern GIS formats, and georeferenced to the British National Grid (see my previous post). Unfortunately, there was an error in some of the attributes of the Cholera Deaths shapefile which caused issues when using the data. PredictionX: John Snow and the Cholera Epidemic of 1854 In 1854, a cholera epidemic swept through the London neighborhood of Soho. In the course of about three weeks, over 600 people died. This incident was, tragically, not unusual in London or the rest of the 19th century world as a whole. The scourge of cholera seemed unstoppable and, even worse, unpredictable.

John Snow's data journalism: the cholera map that changed the world How often does a map change the world? In 1854, one produced by Doctor John Snow, altered it forever. In the world of the 1850s, cholera was believed to be spread by miasma in the air, germs were not yet understood and the sudden and serious outbreak of cholera in London's Soho was a mystery. So Snow did something data journalists often do now: he mapped the cases. The map essentially represented each death as a bar, and you can see them in the smaller image above. It became apparent that the cases were clustered around the pump in Broad (now Broadwick) street. IUCN Red List of Threatened Species Spatial Data & Mapping Resources The IUCN Red List of Threatened Species™ contains global assessments for 105,732 species. More than 75% of these (81,323 species) have spatial data. The spatial data provided below are for comprehensively assessed taxonomic groups and selected freshwater groups. It is important to note that some species (such as those listed as Data Deficient) are not mapped and subspecies, varieties and subpopulations are mapped within the parental species.

How to Change the Projection of a Shapefile Using QGIS All geographic data is tied to some projection or coordinate system. If you know the starting coordinate system or projection of your shapefile, you can quickly export the data into another coordinate or projections system using QGIS. What Files Are Needed to Reproject a Shapefile? To start with, you will need a projection file stored in the same directory as the rest of the shapefile files. Despite being in the singular, the shapefile is actually a set of files. Geospatial Revolution Project Explored Penn State Public Broadcasting has released a web-based series of videos called the Geospatial Revolution Project , the first episode of which debuted in September of 2010: The project will feature a web-based serial release of video episodes—each telling an intriguing geospatial story. Overarching themes woven throughout the episodes will tie them together, and the episodes will culminate in a 60-minute documentary. Geospatial Revolution Episode 1: Introduction to Geospatial technologies The first episode (also viewable below) moves very rapidly over the timeframe of mapping and the development of geospatial technologies starting with etched Babylonian maps dating from 2300 B.C on up to today’s geospatial advances. The episode segues into how users have gone from being passive recipients of geographic information to active participants in the collection and reporting of that information.

Search - Data Portals Application of this Data Policy The statements in this policy apply only to datasets accessible through live.data.gov.dev. Nothing in this policy shall be construed as a limitation or modification of existing laws, rules, and legal precedents. Licensing Unless otherwise indicated, as stated in the next paragraph, datasets accessed through live.data.gov.dev are offered free and without restriction.