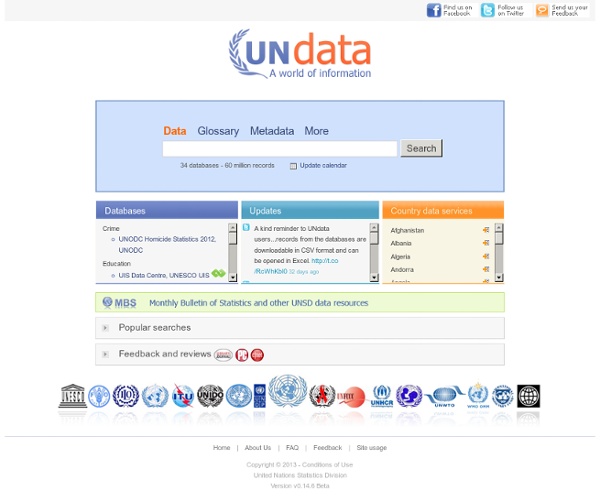 World Health Organization-WHO Eurostat : Browse / Search database Covid-19: Thematic section Housing in Europe – Statistics visualised Have house prices or rents gone up or down in your country in recent years? What share of the population live in owned or rented homes? Explore the new interactive publication "Housing in Europe – statistics visualised" which shows the latest figures on many different aspects of housing. > more Regions in Europe – Statistics visualised How does your region compare? > more Key figures on Europe Do you want to get a quick, interactive overview of a selection of key figures for your country and compare it to others? > more

Case Law on UNCITRAL Texts (CLOUT) The UNCITRAL Secretariat has established a system for collecting and disseminating information on court decisions and arbitral awards relating to the Conventions and Model Laws that have emanated from the work of the Commission. The purpose of the system is to promote international awareness of the legal texts formulated by the Commission and to facilitate uniform interpretation and application of those texts. The system is explained in document A/CN.9/SER.C/GUIDE/1/Rev.2. Search CLOUT Cases Digests Thesauri National Correspondents Bibliography On-line Resources & Webcasts CLOUT -- UNCITRAL's legal database turns 25 Facts about CLOUT Commission on the Status of Women - UNCSW Follow us on: The Commission's mandate was expanded in 1987 by ECOSOC resolution 1987/22 to include the functions of promoting the objectives of equality, development and peace, monitoring the implementation of measures for the advancement of women, and reviewing and appraising progress made at the national, subregional, regional and global levels. Following the 1995 Fourth World Conference on Women, the General Assembly mandated the Commission to integrate into its programme a follow-up process to the Conference, regularly reviewing the critical areas of concern in the Beijing Platform for Action and to develop its catalytic role in mainstreaming a gender perspective in United Nations activities. The Economic and Social Council (ECOSOC) again modified the Commission's terms of reference in 1996, in its resolution 1996/6, deciding that the Commission should: (e) Maintain and enhance public awareness and support for the implementation of the Platform for Action.