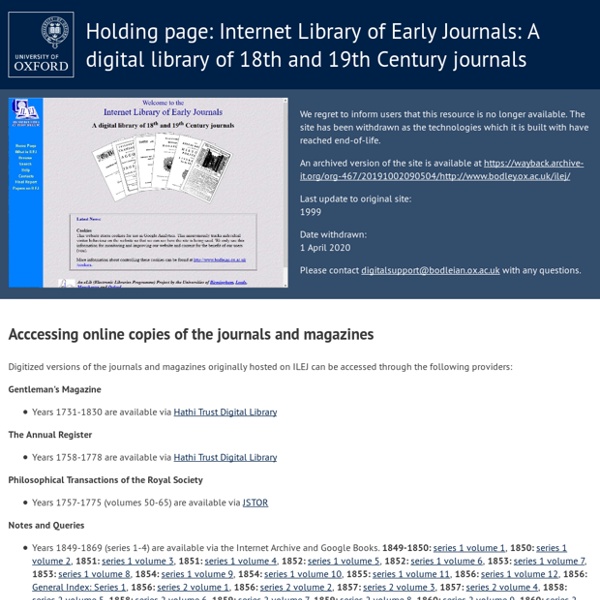 VICTORIAN PERIODICALS [Return to VRW] Tenth edition: July 2010 (First published, 1999) Prepared by Page d'accueil de la Bibliothèque numérique mondiale Internet History Sourcebooks Update Information 2006: In 2006 the Internet Medieval Sourcebooks and associated sourcebooks are undergoing a major overhaul to remove bad links and add more documents. 1. This project is both very large and fairly old in Internet terms. At the time it was instigated (1996), it was not clear that web sites [and the documents made available there] would often turn out to be transient. Forget Me Not: A Hypertextual Archive Images: FMN (1831) Front Paper-Covered Board FMN (1824) Frontispiece Engraving Updated/Revised: January 28, 2007 Archive/Website built, designed & maintained by:Dr.

Libdex – Worldwide index of library catalogues, libraries & books British Library’s Catalog of Illuminated Manuscripts Generous Permissions The British Library began the digital catalog in 1997. Currently the catalog provides a digital record of 4,231 different manuscript, and includes 35,661 images those manuscripts, with a searchable database. The images were scanned following the best digital practices, and include provenance, metadata, and in many cases, detailed images. Today they announced extraordinarily generous permissions for use of those images: Technically these works are still in copyright in the UK until 2040, but given that they are anonymous and many centuries old, the Library has decided to provide the images on the Catalogue of Illuminated Manuscripts under a Public Domain Mark and treat them as public domain works, as would be the case in many other countries.For more information, please see the library’s use and reuse policy for CIM.

Women in the Literary Marketplace Women in the Literary Marketplace The books and letters in this exhibition present a cross section of writing by English women in the nineteenth century–a period when women entered the literary marketplace in unprecedented numbers. While many women wrote and published books before 1800, few British women planned careers as writers until the nineteenth century. And although there were notable and celebrated exceptions, women were excluded from most areas of literature until the end of the eighteenth century. Less than one hundred years later, women wrote an estimated 20% of all material published, a remarkable change in just three generations.

Welcome to the Online Library of Liberty Advanced Search Today the OLL has… 1,692 titles, 466 authors, and 1,185 essays in 24 categories News and Announcements [Archive]: Newspapers and publishers at dawn of 19th century It is important to realize that "objective journalism" is a 20th Century concept. In the 17th through 19th Centuries all of the papers practiced an "advocacy" journalism. The papers were for or against a cause, or the government. It mattered greatly to its publishers and readers whether the paper was Tory or Whig.

Sheldon and Company-19th Century Publisher Sheldon and Company was an important New York publisher in the mid-1800's. My interest in it stems from its publication of juvenile series books. In my bibliography published in 2003 I described 23 series. In the upcoming new edition there will be 49 series noted and discussed.