15 Very Important Jobs Every House Cat Is In Charge Of. What sorts of important jobs does your cat take care of around the house? 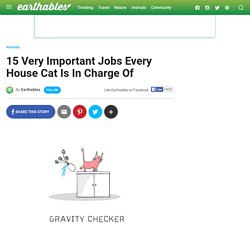 Coming up blank? That's because we tend to take for granted all of the impressive tasks our cats take care of on a regular basis. Love Nature. The Dodo. Clare Bailey - Goat kid madness at the Blackwater - could... The Dodo. Tiswat. David Wolfe - This Elephant Finally Gets To Live Free. Ruby-throated Hummingbird Chicks /Raptor... - Raptor Education Group, Inc. They Reunite An Elephant With Her Old Friend. Now Keep Your Eye On Her Trunk. Meet the Budweiser Clydesdale babies. They're known as gentle giants - a breed of horses plucked out of the pastures of Scotland are now world-famous for their beer roots in St. 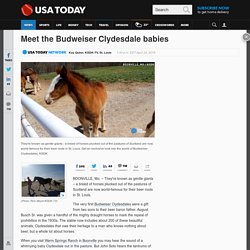 Louis. KC Khodr Chehab. Dog Does Yoga Workout With Woman. A Boy Starts Dancing Alone – When The Girl Joins In, Everyone Stops To Look.Unsuspecting travelers got a wonderful surpri... 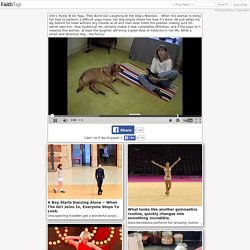 What looks like another gymnastics routine, quickly changes into something incredible.Daria Kondakova performs her amazing routine ... Cameron Diaz, Channing Tatum, And Tom Hanks, Caused Everyone To "Shut Up And Dance"Ms. Tabularasa has created an amazing dancing... Cutting through a plastic bottle, his kitchen tip can help everyone.Nine new food hacks, Doug Armstrong finds new... 41 Incredible Photos That Show What Parenting Is Like In The Wilderness. Wildlife. UPDATES: Get the latest updates and watch the nest from a second camera with infrared technology. 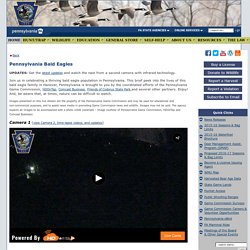 Camera 1 (view Camera 2, time-lapse videos, and updates) A bit of history on the Hanover nest: The first record of an active nest in this area is from 2005. Eagle Watching During the nesting season, bald eagles are sensitive to disruptions such as loud noises and sudden movements. SharingSmiles. Foods That Are Hazardous to Dogs. Most dogs love food, and they’re especially attracted to what they see us eating. 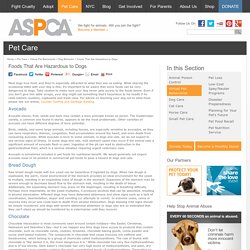 While sharing the occasional tidbit with your dog is fine, it’s important to be aware that some foods can be very dangerous to dogs. Take caution to make sure your dog never gets access to the foods below. Even if you don’t give him table scraps, your dog might eat something that’s hazardous to his health if he raids kitchen counters, cupboards and trash cans. For advice on teaching your dog not to steal food, please see our article, Counter Surfing and Garbage Raiding. Avocado leaves, fruit, seeds and bark may contain a toxic principle known as persin. Birds, rabbits, and some large animals, including horses, are especially sensitive to avocados, as they can have respiratory distress, congestion, fluid accumulation around the heart, and even death from consuming avocado. Avocado is sometimes included in pet foods for nutritional benefit. Dogs are far more sensitive to ethanol than humans are. Monarch - Danaus plexippus Life Cycle Study. On 2/25/2014, I observed a Monarch butterfly laying an egg on Mexican Milkweed - Asclepias curassavica. 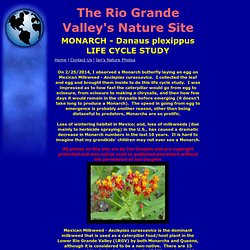 I collected the leaf and egg and brought them inside to do this life cycle study. I was impressed as to how fast the caterpillar would go from egg to eclosure, from eclosure to making a chrysalis, and then how few days it would remain in the chrysalis before emerging (it doesn't take long to produce a Monarch). 22 Photos That Prove Why Babies Need Pets. Number 17 Especially. A child’s development can often be accelerated by daily interactions with the family pet. 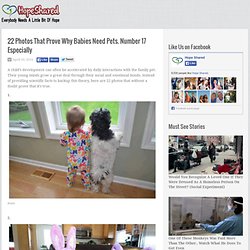 Their young minds grow a great deal through their social and emotional bonds. Instead of providing scientific facts to backup this theory, here are 22 photos that without a doubt prove that it’s true. Banker Rescues Ducklings in the Most Heartwarming WayBanker Rescues Ducklings in the Most Heartwarming Way. On Elephant Sanctuary, Unlikely Friends. When elephants retire, many head for the Elephant Sanctuary in Hohenwald, Tenn. 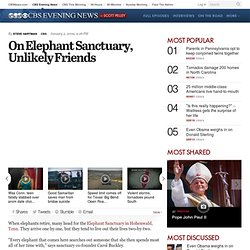 They arrive one by one, but they tend to live out their lives two-by-two. "Every elephant that comes here searches out someone that she then spends most all of her time with," says sanctuary co-founder Carol Buckley. It's like having a best girlfriend, Buckley says - "Somebody they can relate to, they have something in common with. " Mud Bath With starring Role For Baby Elephant. Super Bowl's Baby Clydesdale: A Budweiser Story. Supercats: Episode 1 — The Funniest Cat Video! The difference between dogs and cats :-) 21 Dogs Who Don't Realize How Big They Are. Surfin´ Bulldog (Beach Boys - Surfin´ USA) Www.animalplanet.com/dogs101 - Google Search.