Press Release - Communications Office. Sep 16, 2013 Time is in the eye of the beholder Researchers show that time perception in animals depends on their pace of life An international collaboration led by scientists from Trinity College Dublin including researchers from the University of Edinburgh and the University of St Andrews has shown that animals’ ability to perceive time is linked to their pace of life. 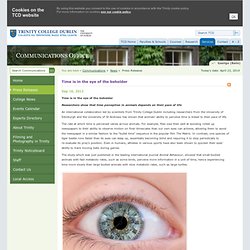 The rate at which time is perceived varies across animals. For example, flies owe their skill at avoiding rolled up newspapers to their ability to observe motion on finer timescales than our own eyes can achieve, allowing them to avoid the newspaper in a similar fashion to the “bullet time” sequence in the popular film The Matrix. Commenting on the findings, Assistant Professor at the School of Natural Sciences at Trinity College Dublin, Andrew Jackson, said: “Ecology for an organism is all about finding a niche where you can succeed that no-one else can occupy. 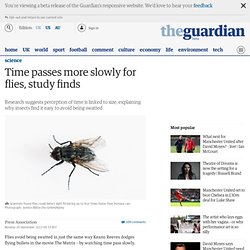 To the insect, that rolled-up newspaper moving at lightning speed might as well be inching through thick treacle. Like Reeves standing back and side-stepping slo-mo bullets, the fly has ample time to escape. And it is not alone in its ability to perceive time differently from us. Research suggests that across a wide range of species, time perception is directly related to size. Generally the smaller an animal is, and the faster its metabolic rate, the slower time passes.

The evidence comes from research into the ability of animals to detect separate flashes of fast-flickering light. "Critical flicker fusion frequency" – the point at which the flashes seem to merge together, so that a light source appears constant – provides an indication of time perception. "Interestingly, there's a large difference between big and small species.

Flies see the world in slow motion, say scientists. Time doesn't fly... if you're a fly! How the insect sees rolled up newspaper moving in slow motion and buzzes away from danger quickly. Time is passing at the same speed, but the fly’s eyes send updates to its brain far more frequently than a human’s eyesLike Reeves side-stepping slow motion bullets, fly has ample time to escapeThe smaller an animal is, the faster its brain works and the quicker time fliesThis is why dogs tend not to watch TV as to them it is just a flicker of lights By Ellie Zolfagharifard Published: 00:00 GMT, 16 September 2013 | Updated: 12:58 GMT, 16 September 2013 Flies avoid being swatted in the same way that Keanu Reeves dodges bullets in the film The Matrix – by watching time pass slowly. 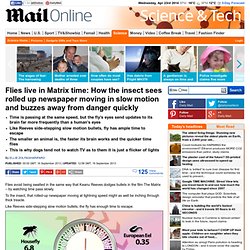 To the insect, that rolled-up newspaper moving at lightning speed might as well be inching through thick treacle. Like Reeves side-stepping slow motion bullets, the fly has enough time to escape. Research led by Trinity College Dublin suggests that time perception is related to a creature's size Of course, time is really passing at the same speed. Metabolic rate and body size are linked with perception of temporal information. Open Access Highlights Animals vary in their ability to perceive changes in their environment visually. 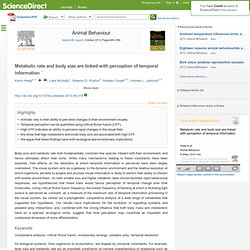 Temporal perception can be quantified using critical flicker fusion (CFF). High CFF indicates an ability to perceive rapid changes in the visual field. We show that high metabolism and small body size are associated with high CFF. We argue that these findings have both ecological and evolutionary implications. Body size and metabolic rate both fundamentally constrain how species interact with their environment, and hence ultimately affect their niche. Keywords comparative analysis; critical flicker fusion; evolutionary ecology; predator–prey; temporal resolution All biological systems, from organisms to ecosystems, are shaped by universal constraints.

In animal species, the limitations of sensory systems are crucial in shaping both intra- and interspecific interactions. Figure 1. This ability to perceive and react to a dynamic environment is a key behavioural and ecological trait. Slow-motion world for small animals. 15 September 2013Last updated at 19:44 ET By Melissa Hogenboom Science reporter, BBC News Starlings were found to have very fast visual systems, a result of observing the world very slowly Smaller animals tend to perceive time as if it is passing in slow motion, a new study has shown. 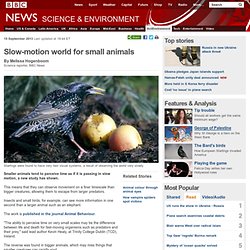 This means that they can observe movement on a finer timescale than bigger creatures, allowing them to escape from larger predators. Insects and small birds, for example, can see more information in one second than a larger animal such as an elephant. The work is published in the journal Animal Behaviour. "The ability to perceive time on very small scales may be the difference between life and death for fast-moving organisms such as predators and their prey," said lead author Kevin Healy, at Trinity College Dublin (TCD), Ireland. The reverse was found in bigger animals, which may miss things that smaller creatures can rapidly spot. Continue reading the main story Speedy creatures Speedy goalkeeper Confused woodlice. BBC Nature - Video collection: Life in slow motion.