California Fox Makes Fastest Endangered Species Recovery (And It’s Pretty Cute) A diminutive California fox, near the brink of extinction just 12 years ago, is being removed from the endangered species list. 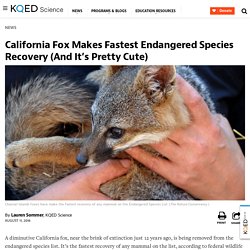 It’s the fastest recovery of any mammal on the list, according to federal wildlife officials. The Channel Islands fox is only found on six islands off the Southern California coast, with each island home to its own subspecies of fox. Rare shark nursery find a WA first. Angela Pownall - The West Australian Video Rare shark nursery find A veteran WA diver has discovered a remote haven for great white sharks, including babies, that could indicate a nearby nursery off WA’s south coast. 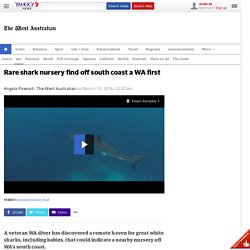 Marc Payne, of Esperance, who has been abalone diving off the south coast for 25 years, captured a rare image of a baby great white shark at the site. New Mountain Lion Found in Santa Monica Mountains. There's a great big cat roaming the western end of the Santa Monicas, according to the National Park Service. 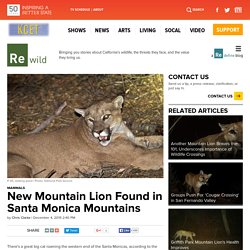 An adult male puma previously undocumented by biologists was captured and collared by Park Service biologists in November, bringing the possible total of adult male cats in the Santa Monicas to three. The mountain lion, dubbed "P-45," is thought to be about two or three years old. He's a big fella; at 150 pounds, P4-5 is larger than all but one other mountain lion found in the Santa Monica Mountains National Recreation Area since Park Service biologists started studying the range's big cats in 2002. (The first puma recorded, P-1, also weighed in at 150 pounds.) According to Park Service biologist Jeff Sikich , P-45 has been spending his time since being collared on November 21 roaming the relatively undeveloped west end of the range toward Ventura. A Wolf Walks Up To A Veteran. Now Watch What Happens When He Turns Around. WOW! Post-Traumatic Stress Disorder (PTSD) is a condition that many veterans suffer from after returning home from combat. 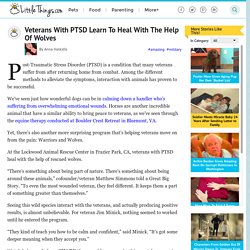 Among the different methods to alleviate the symptoms, interaction with animals has proven to be successful. History, Travel, Arts, Science, People, Places. Newport crowd gets noisy about coyotes: 'We want to kill them now' - Daily Pilot. Coydogs And Lynxcats And Pizzlies, Oh My. Native wolves had been eradicated and the forests of the eastern United States long cut down when residents of western New York first began to notice the arrival of coyotes in the 1940s. 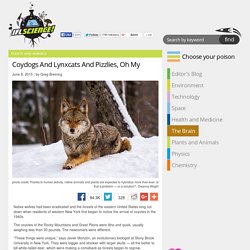 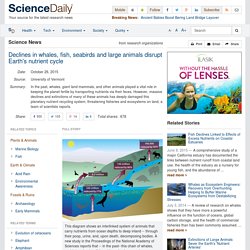 Oceans teemed with ninety-foot-long whales. Huge land animals--like truck-sized sloths and ten-ton mammoths--ate vast quantities of food, and, yes, deposited vast quantities of poop. A new study shows that these whales and outsized land mammals--as well as seabirds and migrating fish--played a vital role in keeping the planet fertile by transporting nutrients from ocean depths and spreading them across seas, up rivers, and deep inland, even to mountaintops. However, massive declines and extinctions of many of these animals has deeply damaged this planetary nutrient recycling system, a team of scientists reported October 26 in the Proceedings of the National Academy of Sciences. "This broken global cycle may weaken ecosystem health, fisheries, and agriculture," says Joe Roman, a biologist at the University of Vermont and co-author on the new study. 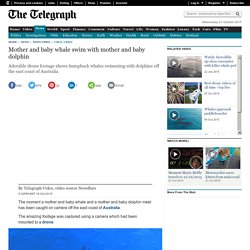 The amazing footage was captured using a camera which had been mounted to a drone. In the clip, which was filmed in early October, two humpback whales can be seen swimming near the surface behind the two dolphins. The whales seem fascinated by the smaller mammals, but the dolphins do not appear phased by their new company. Watch the video above and see to see the moment for yourself.

Nature Bridge Paves Way For Mountain Lion's Survival. I was reading through all the negativity and stupidity this morning while drinking my coffee and something said, ‘how about some good news?’ 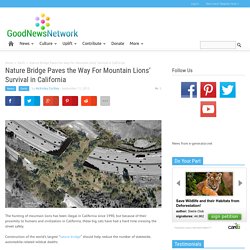 , so I typed in GOOD NEWS and found your site… Ahhh! John Longo. 65 years of shark encounters in San Diego. Great White Shark At Catalina: A Close Encounter of the Carnivorous Kind. Photo Shows Wolf Pups in Northern California. Media Contact:Jordan Traverso, CDFW Communications, (916) 654-9937 Matt Baun, USFWS Communications, (530) 841-3119 The California Department of Fish and Wildlife (CDFW) has photographic evidence of five gray wolf pups and two adults in Northern California. Biologists Have Discovered Los Angeles's Urban Coyotes Are Neighborhood Stereotypes - Wildlife. California May Be Home to a New Lone Wolf. The evidence is more than a furtive photo, less than DNA confirmation, but California wildlife officials are almost certain that a gray wolf has moved into the state. 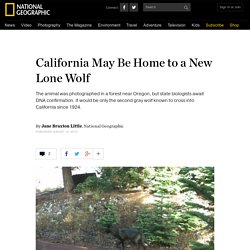 Images captured by a trail camera reveal a "large, dark-colored canid" walking along a dirt track among fir trees in remote Siskiyou County, near the California-Oregon border. State biologists also found fresh wolf-like tracks. Unusual Friendship Between Wolf And Bear Documented By Finnish Photographer. “It’s very unusual to see a bear and a wolf getting on like this” says Finnish photographer Lassi Rautiainen, 56, who took these surprising photos. 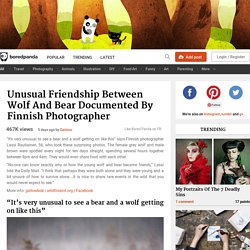 The female grey wolf and male brown were spotted every night for ten days straight, spending several hours together between 8pm and 4am. They would even share food with each other. “No-one can know exactly why or how the young wolf and bear became friends,” Lassi told the Daily Mail. Incredible Footage of The Biggest Great White Shark Ever Recorded! TRS_Blog_DTOP_BelowTitle_336x280 posted By Alli B Alli B A large great white shark named Deep Blue was spotted off the coast of Mexico, near an island in the Pacific Ocean known for being a great white breeding ground.

The tiny, blue-eyed kittens are from separate litters on opposite ends of the Santa Monica Mountains National Recreation Area’s mountain lion study area. One kitten, dubbed P-43, was found in a remote area near Malibu Creek State Park. Dolphin pod gets 'high' off pufferfish toxins and they're too buzzed to spot their prey slip away. A Canary in the Ocean Coal Mine. Another crucial U.S. fish stock is rebuilt, reinforcing the importance of a strong Magnuson-Stevens Act Earlier this week federal managers of West Coast U.S. fish stocks found that canary rockfish is rebuilt.

This is great news for fishermen, seafood consumers, and conservationists, as it means a healthy population that puts more fresh seafood on American plates and supports a stronger ocean ecosystem. Canary rockfish is important in its own right as a species, but this finding allows for increased fishing of other fish populations that swim alongside it – canary is common as bycatch, or non-targeted species that also get caught in fishing gear, and increased catch levels will enable greater fishing opportunities of other species.

How Orcas Work Together to Whip Up a Meal. Meet the Verdugo Mountains&apos; very own mountain lion: P-41. Are Sailfish the World’s Fastest Fish in the Ocean? Sorry sailfish, Bluefin tuna just motored past you… Video: Wolves Brought Into Yellowstone Park – Nobody Expected This Would Be The Outcome. IFAW Releases Amur Tiger Zolushka. 15 Rare Wild Cat Species You Never Knew Existed (Photos) Subscribe Share on Facebook Share on Twitter Share Tweet. Man attempts to hug wild lion. What happened next stunned me. No Cookies. There were too many deer in the forest. So they unleashed the wolves without any idea what would happen. Are Animals Psychic? California Snakes Range Maps. Your online guide to birds and bird watching.