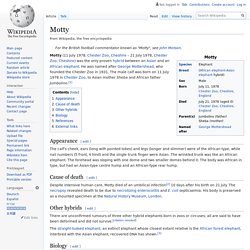 He was named after George Mottershead, who founded the Chester Zoo in 1931. The male calf was born on 11 July 1978 in Chester Zoo, to Asian mother Sheba and African father Jumbolino.[1] Appearance[edit] The calf's cheek, ears (long with pointed lobes) and legs (longer and slimmer) were of the African type, while nail numbers (5 front, 4 hind) and the single trunk finger were Asian. The wrinkled trunk was like an African elephant. (1978) Motty, the only proven African / Asian elephant hybrid. Dzo = Yak + Domestic Cow. Humanzee. The portmanteau word humanzee for a human–chimpanzee hybrid appears to have entered usage in the 1980s.[1] Feasibility[edit] The possibility of human–ape hybrids has been entertained since at least the medieval period; Peter Damian (11th century) claimed to have been shown the monstrous offspring of a human woman who had mated with an ape.[2] Linnaeus (1758) used Homo troglodytes as the taxonomical name for a hypothetical human and orangutan hybrid.[3] Chimpanzees and humans are closely related (sharing 95% of their DNA sequence and 99% of coding DNA sequences[4]), leading to contested speculation that a hybrid is possible. 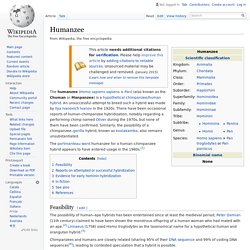 All great apes have similar genetic structure. Chromosomes 6, 13, 19, 21, 22, and X are structurally the same in all great apes.