Alarm sounds for native wildlife. Researchers’ book warns of risks to endangered species and spells out what we have to do to save them. 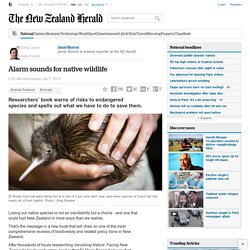 Losing our native species is not an inevitability but a choice - and one that could hurt New Zealand in more ways than we realise. That's the message in a new book that will draw on one of the most comprehensive reviews of biodiversity and related policy done in New Zealand. After thousands of hours researching Vanishing Nature: Facing New Zealand's biodiversity crisis, lead author Dr Marie Brown believes that saving cherished species such as the kiwi and kakapo is not so much a scientific problem as a political and economic one. She said the country had to overhaul legislation, beef up conservation funding and empower all New Zealanders to get involved. Losing the battle for native species would be a blow for the environment, tourism and the wider economy, she said. "So much of our international brand is reliant on a clean and healthy environment. Predation of native birds.

New Zealand native birds have been greatly affected by predation. 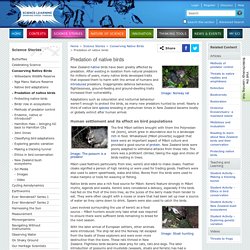 After existing in isolation from natural predators for millions of years, many native birds developed traits that exposed them to harm with the arrival of humans and introduced predators. Inappropriate defence behaviours, flightlessness, ground-feeding and ground-dwelling traits increased their vulnerability. Adaptations such as colouration and nocturnal behaviour weren’t enough to protect the birds, as many new predators hunted by smell. Protecting native birds. New Zealand birds evolved in isolation from natural predators for around 65 million years. 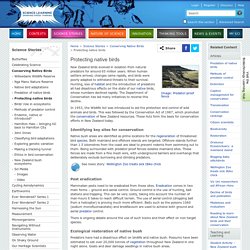 When human settlers arrived, changes came rapidly, and birds were poorly adapted to withstand threats to their survival. Hunting, loss of habitat and the introduction of predators all had disastrous effects on the state of our native birds, whose numbers declined rapidly. The Department of Conservation has led many initiatives to reverse this decline. Small wins in battle to save the Kiwi - NZ Herald. Declining bird population could be turned around this decade, DoC expert believes New Zealand is winning the battle to save our national icon, a Department of Conservation expert says, though an average 27 kiwi are still being lost each week. 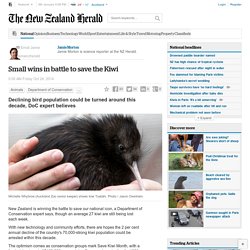 With new technology and community efforts, there are hopes the 2 per cent annual decline of the country's 70,000-strong kiwi population could be arrested within this decade. The optimism comes as conservation groups mark Save Kiwi Month, with a fundraising target of $100,000 - enough to offer a year's protection for 1000 birds. Each year roughly between $5 and $10 million is being poured into the fight, $2 million of it solely for the country's five kiwi sanctuaries. But DoC scientist Dr Hugh Robertson said each of the five different species still faced their own threats to survival. "In a place like Northland, the survival rate of adults is only 13 to 14 years, whereas it should be around 50 years. "We are certainly winning the battle.

Campbell Island teal. Since the removal of cats and rats from Campbell Island which started in 2001, and no remaining trace of them in 2003, translocated teal from captive breeding are expected to occupy their former entire range on the island within five years. 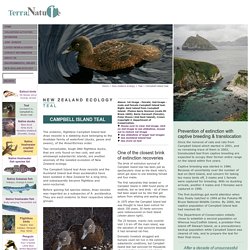 Captive breeding was started in 1984. Because of uncertainty over the number of teal on Dent Island, and concern for taking too many birds off, 3 males and 1 female were captured for breeding. With no duckling arrivals, another 4 males and 3 females were captured in 1990. The first ducklings got world attention when they finally hatched in 1994 at the Pukaha Mt Bruce National Wildlife Centre. By 2000, the captive population of Campbell Island teal had reached 60. Chatham Island taiko. The Chatham Island taiko was declared extinct, but was rediscovered by David Crocket in 1978 at the south-east corner of Chatham Island, 111 years after it was first found at sea. 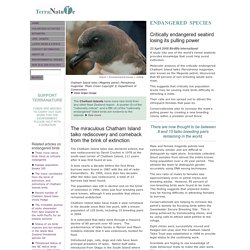 It took nearly a decade before the first three burrows were found in 1987 with the aid of radio transmitters. By 1999, more than two decades after the taiko was rediscoverd, a total of 23 burrows had been found.

NZ red-crowned parakeet. With an apparent centre of origin in New Zealand, Cyanoramphus are believed to have dispersed across ocean barriers to many islands of the South Pacific [Fleming 1976]. 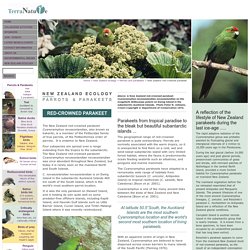 The most ancient lineage of Cyanoramphus is the New Caledonian endemic C. salsetti, which is the likely source of radiation of species in new Zealand and its offshore islands. This was probably the result of vicariant events due to the fluctuation in glacial ice followed by allopatric speciation in the last 450,0000-625,000 years [Boon et al. 2001]. In 1849, settlers came to Port Ross on the northeastern tip of Auckland Island. They very quickly became disillusioned with the consistent westerly gales and rain, a year-round winter climate, and impossible farming conditions, and abandoned the island after two years. In the Auckland Islands the summer temperatures range from 5.5°C to 12°C, more than 1200 mm of rain falls on 320 days of the year, and the Furious Fifties westerly winds are interminable. 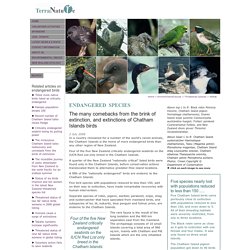 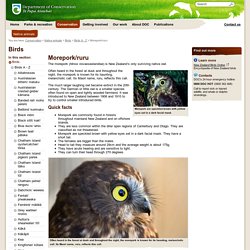 Morepork are speckled brown with yellow eyes set in a dark facial mask Often heard in the forest at dusk and throughout the night, the morepork is known for its haunting, melancholic call. Its Maori name, ruru, reflects this call. The much larger laughing owl became extinct in the 20th century. The German or little owl is a smaller species often found on open and lightly wooded farmland. Quick facts. NZ wood pigeon / kereru. New Zealand's native pigeon, also known as kererū, kūkū and kūkupa and wood pigeon, is the only disperser of large fruits, such as those of karaka and taraire, we have. 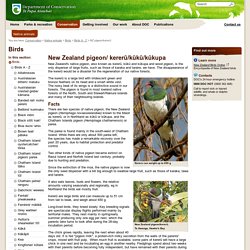 The disappearance of the kererū would be a disaster for the regeneration of our native forests. Kereru can weight up to 650 g The kererū is a large bird with irridescent green and bronze feathers on its head and a smart white vest. The noisy beat of its wings is a distinctive sound in our forests.

Giant snail. Population: UnknownThreat status: Varies between species Found in: Native forests, especially around north–west Nelson and north Westland.Did you know: These species of native carnivorous snails are the largest in the world, some growing as big as a man’s fist. They suck up earthworms like spaghetti but are among our most threatened invertebrates. Rats and possums are major predators. Powelliphanta snail is at risk from a predator plague caused by high levels of seed production ('beech mast') in 2014. Battle for our Birds protects Powelliphanta snail and other native species from predators. Wētā. Wētā are incredible looking creatures. They range in size, but with their big bodies, spiny legs, and curved tusks, they are one of New Zealand's most recognisable creepy-crawlies. Facts Wētā have become icons for invertebrate conservation in New Zealand because many species are threatened or endangered. There are more than 70 species of wētā in New Zealand, 16 of which are at risk.