Manul – the Cat that Time Forgot. Have you ever wanted to take a trip through time to see what animals looked like millions of years ago? 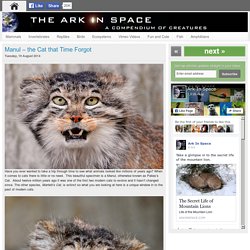 When it comes to cats there is little or no need. This beautiful specimen is a Manul, otherwise known as Pallas’s Cat. About twelve million years ago it was one of the first two modern cats to evolve and it hasn’t changed since. The other species, Martelli’s Cat, is extinct so what you are looking at here is a unique window in to the past of modern cats. Although the Manul is only the size of the domestic cat, reaching about 26 inches in length its appearance makes it appear somewhat larger. The main reason for its survival throughout the ages has been its isolation. Take a close look at the eyes of the Manul. It also has a much shorter face than other cats, which makes its face look flattened. The Manus has not been studied a great deal in the wild, where it is classified as near threatened. Don’t rush to your local pet store, however.

World's Smallest Animals. Kangaroos have three vaginas. We interrupt your regularly scheduled news programming to bring you this wonderful piece of trivia about kangaroo genitals. 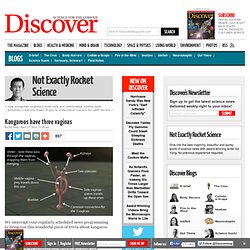 Regular readers will know of my love for Inside Nature’s Giants, the British documentary where anatomists cut up large animals to examine how their bodies work and evolved. It’s a truly incredible show, combining unbridled joy at the natural world, drama, and solid educational value. So far, it has brought us the horrifying throat of a leatherback turtle, the mysterious bloodsweat of a hippo, and the exploding insides of a beached whale. But this week’s episode may have topped all of that with the triple vaginas of the female kangaroo. The diagram above (an annotated screengrab from the show) explains the complicated plumbing. This set-up is shared by all marsupials – the group of mammals that raise their young in pouches.

Note that the ureters, which carry urine from the kidneys to the bladder, pass through the gaps between the three tubes. Werewolf Cats. Lykio Cats is a new breed of kitty that looks like a werewolf. 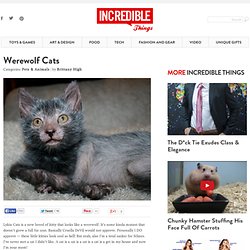 It’s some kinda mutant that doesn’t grow a full fur coat. Basically Cruella DeVil would not approve. Personally I DO approve — these little kitties look cool as hell! LIL BUB. BUB is a very special one of a kind critter. 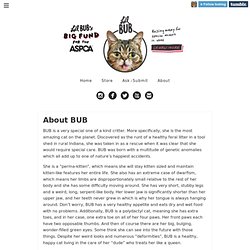 More specifically, she is the most amazing cat on the planet. Discovered as the runt of a healthy feral litter in a tool shed in rural Indiana, she was taken in as a rescue when it was clear that she would require special care. BUB was born with a multitude of genetic anomalies which all add up to one of nature’s happiest accidents. She is a “perma-kitten”, which means she will stay kitten sized and maintain kitten-like features her entire life.

Top 5 Biggest Domestic Cats. And by big cats we don’t mean lions and tigers, although those are awesome too, but we’ll take a look at domestic pets. 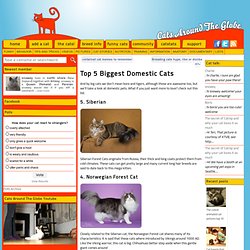 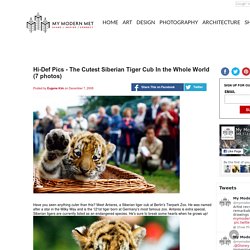 Meet Antares, a Siberian tiger cub at Berlin's Tierpark Zoo. He was named after a star in the Milky Way and is the 121st tiger born at Germany's most famous zoo. Antares is extra special, Siberian tigers are currently listed as an endangered species. He's sure to break some hearts when he grows up! Adorable Portraits of Pollen-Covered Bats Taken by the World's Leading Bat Expert.

Bats are some of the most fascinating and misunderstood creatures in the world, and few know this better than Merlin Tuttle, the world's leading bat biologist and photographer. 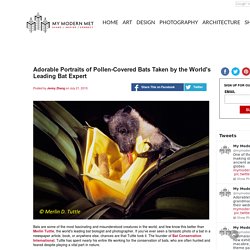 If you've ever seen a fantastic photo of a bat in a newspaper article, book, or anywhere else, chances are that Tuttle took it. The founder of Bat Conservation International, Tuttle has spent nearly his entire life working for the conservation of bats, who are often hunted and feared despite playing a vital part in nature. His passion sprouted as a teenager living in Tennessee in the 1950s, when Tuttle managed to prove that gray bats are migratory, contrary to what textbooks and scientists said at the time. Since this first breakthrough, Tuttle has gone on to become a top ecologist who has captured and banded well over 40,000 bats in order to identify and track them for research purposes. Part of his work includes photographing bats in an effort to positively depict their harmless—and often adorable—nature. Funny animal photos of the month (40 photos. Abandoned piglet is lost and hound: Giant farm dog saves baby pig's bacon by adopting it as one of its own.

By Liam Milller Updated: 07:13 GMT, 4 September 2009 A giant farm dog and a tiny piglet cuddle up as if they were family after the baby runt was dismissed by its own mother. 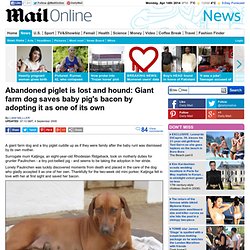 Surrogate mum Katjinga, an eight-year-old Rhodesian Ridgeback, took on motherly duties for grunter Paulinchen - a tiny pot-bellied pig - and seems to be taking the adoption in her stride. Lonely Paulinchen was luckily discovered moments from death and placed in the care of the dog who gladly accepted it as one of her own. Thankfully for the two-week old mini porker, Katjinga fell in love with her at first sight and saved her bacon. Enlarge Motherly love: Baby piglet feeds on its new surrogate mum And the unlikely relationship has made the wrinkly piggy a genuine sausage dog. Oh They’re So Surprised! Oh They’re So Surprised! 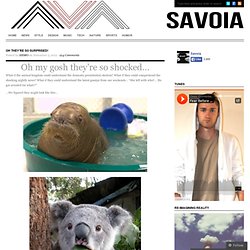 Posted by SHMO on November 5, 2012 · 124 Comments What if the animal kingdom could understand the dramatic presidential election? What if they could comprehend the shocking nightly news? What if they could understand the latest gossips from our weekends… “She left with who? … He got arrested for what!?” …We figured they might look like this… 3018167_700b.jpg (JPEG Image, 500 × 4313 pixels) - Scaled (20. Podborka_93.jpg (JPEG Image, 467 × 700 pixels) Breathtaking Black & White Animal Portraits by Lukas Holas. Adorable "Leaf Sheep" Sea Slugs Look like Cartoon Lambs. If you thought last week's sea bunnies were cute, here's one more underwater treasure that will make you say "aww! 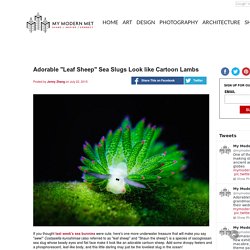 " Costasiella kuroshimae (also referred to as "leaf sheep" and "Shaun the sheep") is a species of sacoglossan sea slug whose beady eyes and flat face make it look like an adorable cartoon sheep. The Fox Den - Aurora. The Rare White Lion, a photo from Attiki, Attica. Critiques | Translate carper hoi Panos, This is a great head of a lion.

My compliments for it. Very, very nice. Quegardens In this and other of your wonderful shots Panos,you bring out great expression in the eyes of your subjects.Those soft welcoming eyes could be decieving though....I wouldn't want to get too close:-)Great focus on where it matters most. Edwin. Vampire Squid's Surprising Diet Revealed. Image courtesy MBARI Despite its ghoulish name and looks, the vampire squid (pictured, an individual in 2004) isn't a bloodthirsty terror of the deep after all, a new study says. Instead, the nightmarishly named species browses on "marine snow"—dead plankton, algae, fecal matter, goo, shells shed by tiny crustaceans, and other detritus. The squid gather the food particles using two long, hair-lined filaments before wrapping the bits into meal-size mucus balls, according to undersea video footage, live lab observations of captive vampire squid, autopsies, and examination via electron microscope.