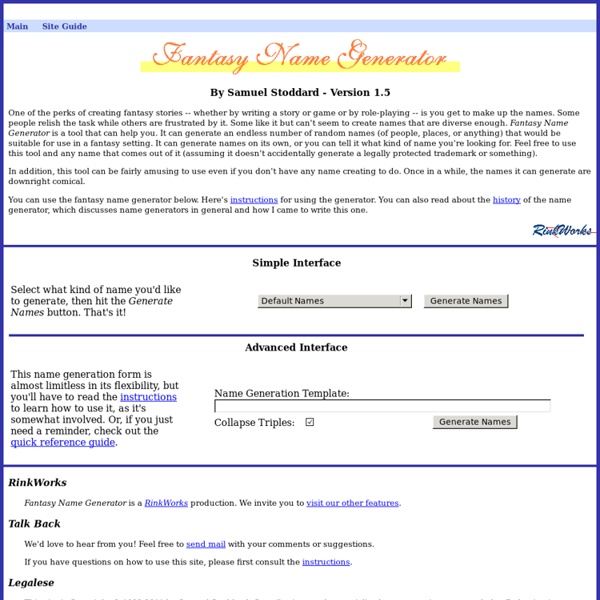 By Samuel Stoddard - Version 1.5 One of the perks of creating fantasy stories -- whether by writing a story or game or by role-playing -- is you get to make up the names. Some people relish the task while others are frustrated by it. Some like it but can't seem to create names that are diverse enough. Fantasy Name Generator is a tool that can help you. It can generate an endless number of random names (of people, places, or anything) that would be suitable for use in a fantasy setting. In addition, this tool can be fairly amusing to use even if you don't have any name creating to do. You can use the fantasy name generator below.

The 25 Best Websites for Literature Lovers It’s an interesting relationship that book lovers have with the Internet: most would rather read a physical book than something on an iPad or Kindle, and even though an Amazon purchase is just two or three clicks away, dedicated readers would rather take a trip to their local indie bookstore. Yet the literary world occupies a decent-sized space on the web. Readers, writers, publishers, editors, and everybody in between are tweeting, Tumbling, blogging, and probably even Vine-ing about their favorite books. 9 Amazing Projects Made in Microsoft Excel It's easy to underestimate the power of Excel. Many associate the Microsoft tool with headaches from crunching numbers and tedious charts. But there's more to the spreadsheet-making program than you think. Whether it's an impressive map visualization or aesthetically pleasing works of art, Excel shows that beautiful graphics don't always require fancy software. We rounded up nine creative projects you won't believe were made in Microsoft Excel. 1.

Article (Love Letter to Ed Greenwood) This regular column is for Dungeon Masters who like to build worlds and campaigns as much as I do. Here I share my experiences as a DM through the lens of Iomandra, my Dungeons & Dragons campaign world. Even though the campaign uses the 4th Edition rules, the topics covered here often transcend editions. Hopefully this series of articles will give you inspiration, ideas, and awesome new ways to menace your players in your home campaigns. If you’re interested in learning more about the world of Iomandra, check out the wiki. O ne thing that classic fantasy stories have in common, apart from a preponderance of fantasy tropes, is an exhaustive cast of characters.

Fantasy Place Name Generator for RPG players and authors Naming Your Geographical Features This name generator generates names for geographical features, town names and village names. Names vary from the amost normal to the downright bizarre. Its good for when you are stuck for an idea. Ten Obvious Truths About Fiction The following essay was previewed in the class that Stephen Graham Jones taught for LitReactor, Your Life Story Is Five Pages Long. 1. The reader should never have to work to figure out the basics of your story. OpenRPG: Online Virtual Tabletop I've been wanting to redesin my website for some time. This new design is really only a tweak to the old design, but it has one important change: it works on both desktop and mobile devices. And it's not two different sites (as is often the case), but rather one site that adapts. If you look at this site on your smartphone, it should adapt to the smaller screen size.

25 Ways To Plot, Plan and Prep Your Story I’m a panster at heart, plotter by necessity — and I always advocate learning how to plot and plan because inevitably someone on the business side of things is going to poke you with a pointy stick and say, “I want this.” Thus you will demonstrate your talent. Even so, in choosing to plot on your own, you aren’t limited to a single path. And so it is that we take a look at the myriad plotting techniques (“plotniques?”)

Set up Your Story in the First Paragraphs by Jodie Renner, editor, author, speaker I receive several first chapters (and synopses) every week as submissions for possible editing, and I always read the first page. Some are clear and compelling and make me want to read more. But too often, two main problems emerge: Either the author spends too much time revving his engine with description or backstory before we even care (boring); or we’re plunged right into the story but have no idea where we are or what’s going on (confusing). How to Use the Fill Command in Minecraft This Minecraft tutorial explains how to use the /fill command with screenshots and step-by-step instructions. In Minecraft PC version, you can fill an area or outline with a particular block using the /fill command. Let's explore how to use this cheat (game command).

How to Flesh out a Country or Region in Your Fantasy RPG World Edit Article Edited by Zach Haffey, Maluniu, Glutted, Nicole Willson and 5 others Hello game master/fantasy author. This is a guide to organizing and sorting out the finer details and aspects of a specific country or region of your world: a format for the living details that help you and your players delve in to the role-playing aspect of your game. Ad Steps Story Starters Looking for story starters and creative writing ideas? You've just struck gold. Here you'll find an endless supply of inspiration.