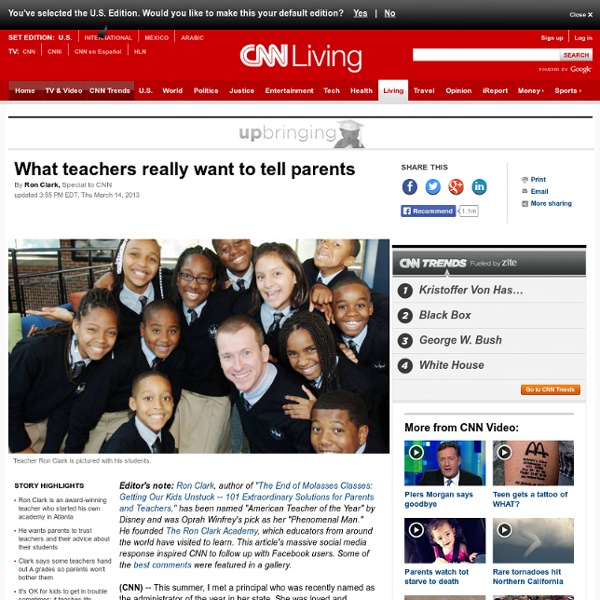 Teacher Ron Clark is pictured with his students. Ron Clark is an award-winning teacher who started his own academy in AtlantaHe wants parents to trust teachers and their advice about their students Clark says some teachers hand out A grades so parents won't bother themIt's OK for kids to get in trouble sometimes; it teaches life lessons, Clark says Editor's note: Ron Clark, author of "The End of Molasses Classes: Getting Our Kids Unstuck -- 101 Extraordinary Solutions for Parents and Teachers," has been named "American Teacher of the Year" by Disney and was Oprah Winfrey's pick as her "Phenomenal Man." He founded The Ron Clark Academy, which educators from around the world have visited to learn. This article's massive social media response inspired CNN to follow up with Facebook users. Some of the best comments were featured in a gallery. (CNN) -- This summer, I met a principal who was recently named as the administrator of the year in her state. So, what can we do to stem the tide? Wow.

Why Education Without Creativity Isn't Enough Phaneesh Murthy, CEO of Indian outsourcing company iGate Patni. | Photo by Ritam Banerjee Last April, when sharing a stage at Facebook with CEO Mark Zuckerberg, President Obama summed up the conventional wisdom on what's needed to shape American minds for the global marketplace. "We've got to do such a better job when it comes to STEM education," he said. "That's how we're going to stay competitive for the future." If we could just tighten standards and lean harder on the STEM disciplines--science, technology, engineering, mathematics--we'd better our rigorous rivals in India and China, and get our economy firing on all cylinders. As with much conventional wisdom, this is conventional in the worst sense of that word. If you want the truth, talk to the competition. "In India, it takes engineers two to three years to recover from the damage of the education system." Murthy will tell you that the outsourcing industry is not some unstoppable force: It's hitting real limits. Or don't.

The World Is My School: Welcome to the Era of Personalized Learning By Maria H. Andersen Future learning will become both more social and more personal, says an educational technology expert. Humans have always been learning, but how we learn has changed over time. The earliest means of education were highly personal: Oral histories passed from adults to children, informal or formal apprenticeships, and one-on-one tutoring have all been used in the early history of most cultures. Certainly, personalized learning is the more effective method. Mass education is adequate, as long as students are highly motivated to learn and get ahead of their peers. The vision of a modern education built around personalized learning is not new, but it is definitely tantalizing. Learning Technologies Today Let’s start by taking stock of the personalized technologies for information that we already have. This is a problem; for deep learning to occur, we need to have repeated exposure to the information, along with some time in between for reflection. A Simple Idea: Learn This

Canadian teens put a (Lego) man into space for just $400 It was probably a rather small step for Lego but it was certainly one giant leap for a Lego man when he was launched into space by a couple of Canadian teens recently. The mission was the result of the hard work and ingenuity of friends Mathew Ho and Asad Muhammad, who worked on their project during free time on weekends. It took them four months to complete and cost just $400. The space-bound contraption the two 17-year-olds came up with comprised an $85 weather balloon, a homemade parachute, a Styrofoam box, three point-and-shoot cameras, a wide-angle video camera, and a cell phone loaded with a GPS app so they’d be able to find the thing when it (hopefully) returned to Earth. The finishing touch came in the form of a Lego man holding the Canadian flag strapped to a gangplank attached to their creation. Now that it was built, the question was: would it get off the ground? At an altitude of just over four miles the GPS signal was, as expected, lost. [Source: Toronto Star]

Noam Chomsky on the Purpose of Education by Maria Popova On the value of cultivating the capacity to seek the significant. In this talk based on his presentation at the Learning Without Frontiers conference in January, philosopher, linguist, and cognitive scientist Noam Chomsky — easily one of our time’s sharpest thinkers — discusses the purpose of education. Despite the slow pace and the cheesy AfterEffects animated typography, the video is a treasure trove of insight on everything from the role of technology to the pitfalls of policy. On the industrialization of education, echoing Sir Ken Robinson’s admonition about its effects on creativity: There have been many measures taken to try to turn the educational system towards more control, more indoctrination, more vocational training, imposing a debt, which traps students and young people into a life of conformity… That’s the exact opposite of [what] traditionally comes out of The Enlightenment. On technology: Technology is basically neutral. On the whimsy of inquiry: ↬ @openculture

Case Western Reserve University THE SEMINAR by Michael Kahn (Unpublished paper, 1974, reprinted with the author's permission. See also Kahn, M., "The Seminar: An Experiment in Humanistic Education." Journal of Humanistic Psychology, 21(2), 119-127, Spring 1981.) Why do you come to college? It has never seemed reasonable to me that one comes to college because of the professors. Hutchins was a good student of Plato, and as such, believed that the professors didn’t have anything to teach anyway, he believed that it’s all in you already and only requires a nurturant environment to emerge into your consciousness. It’s a decidedly interpersonal theory of learning. And so long ago, I suppose in most civilizations, the seminar was born. I don’t know how it was in all the other civilizations that invented the seminar, but in our own culture there are difficulties. We do other things all right. But if we could ever learn to seminar . . . If we ever could . . . If we could learn it we could change the whole game.