10 Whiskeys Every Whiskey Drinker Should Try. Every man should at least try to acquire a taste for a good whiskey — and it doesn’t hurt that women seem to appreciate a man of good tastes. 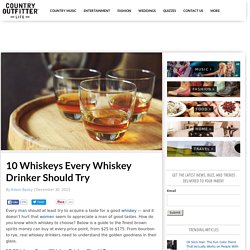 How do you know which whiskey to choose? Below is a guide to the finest brown spirits money can buy at every price point, from $25 to $175. From bourbon to rye, real whiskey drinkers need to understand the golden goodness in their glass. 10 Whiskeys Every Whiskey Drinker Should Try 1. This 90-proof, five-year-old rye will drink well beyond its years — and its price. georgedickel.com 2. With this bourbon you get exactly what you pay for — it’s strong, smoky, and goes down with a hint of caramel charm. Fourrosesbourbon.com 3. Psychological Characteristics of BDSM Practitioners - Wismeijer - 2013 - The Journal of Sexual Medicine. A one-of-a-kind marketplace from Steven Soderbergh. - Extension 765. (Note: This posting is for educational purposes only.) 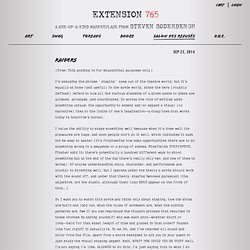 I’m assuming the phrase “staging” came out of the theatre world, but it’s equally at home (and useful) in the movie world, since the term (roughly defined) refers to how all the various elements of a given scene or piece are aligned, arranged, and coordinated. In movies the role of editing adds something unique: the opportunity to extend and/or expand a visual (or narrative) idea to the limits of one’s imagination—a crazy idea that works today is tomorrow’s normal.

I value the ability to stage something well because when it’s done well its pleasures are huge, and most people don’t do it well, which indicates it must not be easy to master (it’s frightening how many opportunities there are to do something wrong in a sequence or a group of scenes. Minefields EVERYWHERE. 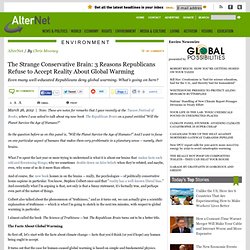 Join our email list: Stay up to date with the latest headlines via email. Note: These are notes for remarks that I gave recently at the Tucson Festival of Books, where I was asked to talk about my new book The Republican Brain on a panel entitled "Will the Planet Survive the Age of Humans? " So the question before us on this panel is, "Will the Planet Survive the Age of Humans? " What I've spent the last year or more trying to understand is what it is about our brains that makes facts such odd and threatening things; why we sometimes double down on false beliefs when they're refuted; and maybe, even, why some of us do it more than others.

And of course, the new book homes in on the brains -- really, the psychologies -- of politically conservative homo sapiens in particular. Former Mormon: What Americans Need to Know About Mormonism. March 26, 2012 | Like this article? 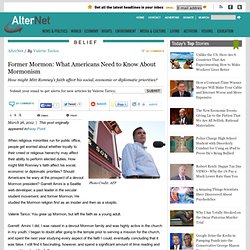 Join our email list: Stay up to date with the latest headlines via email. This post originally appeared inAway Point. When religious minorities run for public office, people get worried about whether loyalty to their creed or religious hierarchy may affect their ability to perform elected duties. Valerie Tarico: You grew up Mormon, but left the faith as a young adult. Garrett Amini: I did. Tarico: How would you describe Mormonism briefly to your average American who has grown up surrounded by Protestant or Catholic Christianity?

Amini: It helps to know a little history. Mormons believe that the Bible and the Book of Mormon are scriptures from God, and focus upon the atonement of Jesus Christ. The early history of the church is tumultuous – the church moved several times in the eastern states to avoid persecution. Tarico: Do Mormons think of themselves as Christians? Amini: Yes, absolutely. L.php?u=http%3A%2F%2Fwww.technologyreview.com%2Fblog%2Farxiv%2F27291%2F%3Ffb_ref%3Darticle&h=gAQFbWfd7&site=www.technologyreview.com&type=R&plugin=R&social=false&pos=1%2F4&signature=6d4f846cadbf1d1a&referrer=http%3A%2F%2Fwww.technologyreview. Why Our Universe Must Have Been Born Inside a Black Hole. “Accordingly, our own Universe may be the interior of a black hole existing in another universe.” 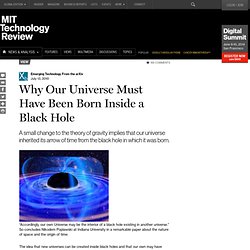 So concludes Nikodem Poplawski at Indiana University in a remarkable paper about the nature of space and the origin of time. The idea that new universes can be created inside black holes and that our own may have originated in this way has been the raw fodder of science fiction for many years. But a proper scientific derivation of the notion has never emerged. Today Poplawski provides such a derivation. He says the idea that black holes are the cosmic mothers of new universes is a natural consequence of a simple new assumption about the nature of spacetime.

Poplawski points out that the standard derivation of general relativity takes no account of the intrinsic momentum of spin half particles. This predicts that particles with half integer spin should interact, generating a tiny repulsive force called torsion. That’s interesting for a number of reasons. This is a Big Bang type event.