The Indian Quarterly – A Literary & Cultural Magazine – People of the Rain. We who’ve known the monsoon rain in Vayalnad shall for ever feel its waters pocking our dark bodies. 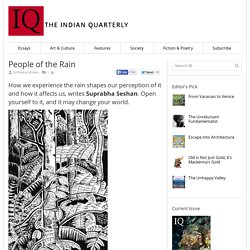 Hard rain, day after day, month after month, permeates our thoughts and dissolves our skin, as it does the forest where we live. This rain runs through every pore and every niche, every rootlet and vein. This monsoon, another kind of monsoon, is mostly a memory now, but one that shall live as long as we do, as long as there are Paniya people here, and Kurchiyas, and the tales of early migrant settlers; as long as there are men and women who sing its song.

We are syncretic with rain. We can be called a rain culture. Her teacher Made Her Answer Her Phone In Class. He Would End Up Regretting It. Kate Bush & her Shivaism, Dionysian and Druid Philosophy. Killing Joke band member and record producer Youth reviews Kate Bush’s recent live concert: 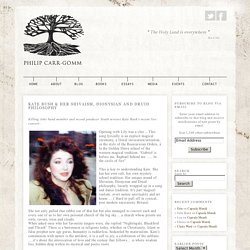 Lasting Relationships Rely On 2 Traits. Gottman wanted to know more about how the masters created that culture of love and intimacy, and how the disasters squashed it.

In a follow-up study in 1990, he designed a lab on the University of Washington campus to look like a beautiful bed-and-breakfast retreat. He invited 130 newlywed couples to spend the day at this retreat and watched them as they did what couples normally do on vacation: cook, clean, listen to music, eat, chat, and hang out.

And Gottman made a crucial discovery in this study—one that gets at the heart of why some relationships thrive while others languish. Throughout the day, partners would make requests for connection, what Gottman calls “bids.” 15 Awesome Teachers You Wish You Had In School - Dolphin Man. The Great Dragon of the Book of Revelation. EmailShare 95EmailShare “The great dragon was hurled down—that ancient serpent called the devil, or Satan, who leads the whole world astray. 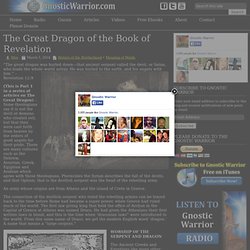 He was hurled to the earth, and his angels with him.” – Revelation 12:9 (This is Part 1 in a series of articles on The Great Dragon) – Some theologians say it is not the devil or demons who created evil, but that they were cast forth from heaven by the orders of good angels for their pride. The Project Gutenberg eBook of The Pacific Triangle, by Sydney Greenbie. In Search Of the Goddess. As pagans we know that the Gods and Goddess are aspects of the Divine that we attribute characteristics and virtues to. 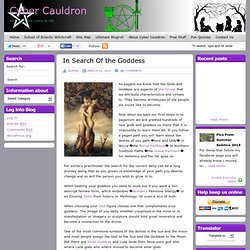 They become archetypes of the people we would like to become. Now when we take our first steps in to paganism we are greeted hundreds of new gods and goddess so many that it is impossible to learn them all. If you follow a pagan path you will learn about the deities of you path lord and Lady in Wicca the Norse Pantheon In Northern Tradition Paths the Greek Pantheon for Hellenics and the list goes on. For solitary practitioner the search for the correct deity can be a long journey being that as you grown in knowledge of your path you desires change and so will the person you wish to grow in to. When seeking your goddess you need to work out if you want a non descript female form, which embodies Woman / Feminine energy or an Existing Deity from history or Mythology. When choosing your God figure choose one that complements your goddess. Gods and goddess related to sport. 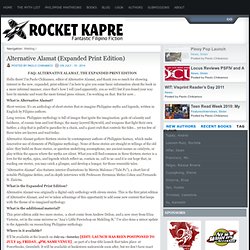 I’m Paolo Chikiamco, editor of Alternative Alamat, and thank you so much for showing interest in the new, expanded, print edition! I’m here to give you some basic information about the book in a more informal manner, since that’s how I roll (and apparently, you as well!) But if you found your way here by mistake and want the more formal press release, I’m working on that. But for now… What is Alternative Alamat? Short version: It’s an anthology of short stories that re-imagine Philippine myths and legends, written in English by Filipino authors. MEDITATION MUSIC BABA NAM KEVALAM LOVE IS ALL THERE IS - Mp3 Download (2.52 MB) Skeleton of Possible 'Witch Girl' Found.

An archaeological dig in northern Italy has unearthed the remains of a 13-year-old-girl buried face-down -- evidence, archaeologists say, that despite her young age, she was rejected by her community and seen as a danger even when dead. 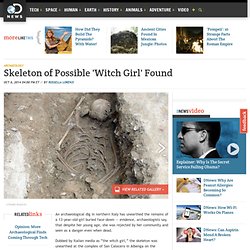 Dubbed by Italian media as “the witch girl,” the skeleton was unearthed at the complex of San Calocero in Albenga on the Ligurian Riviera, by a team of the Pontifical Institute of Christian Archaeology at the Vatican. The site, a burial ground on which a martyr church dedicated to San Calocero was built around the fifth and sixth centuries A.D., was completely abandoned in 1593. PHOTOS: Great Archaeological Discoveries Ahead The prone burial, which has yet to be radiocarbon dated, is thought to date from the late antiquity or the early Middle Ages.

“These rare burials are explained as an act of punishment.