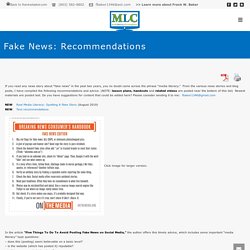 From the various news stories and blog posts, I have compiled the following recommendations and advice. (NOTE: lesson plans, handouts and related videos are posted near the bottom of this list) Newest materials are posted last. Do you have suggestions for content that could be added here? Please consider sending it to me: fbaker1346@gmail.com NEW: Real Media Literacy: Spotting A Fake Story (August 2019)NEW: Text recommendations Click image for larger version. In the article “Five Things To Do To Avoid Posting Fake News on Social Media,” the author offers this timely advice, which includes some important “media literacy” type questions: – does this (posting) seem believable on a basic level? 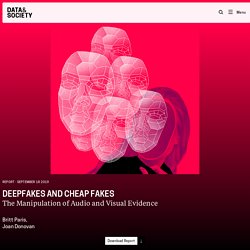 What they do is provide new opportunities for the negotiation of expertise, and therefore power.” — Britt Paris and Joan Donovan Coining the term “cheap fakes,” Paris and Donovan demonstrate that the creation of successfully deceptive media has never necessarily required advanced processing technologies, such as today’s machine learning tools. A “deepfake” is a video that has been altered through some form of machine learning to “hybridize or generate human bodies and faces,” whereas a “cheap fake” is an AV manipulation created with cheaper, more accessible software (or, none at all). Cheap fakes can be rendered through Photoshop, lookalikes, re-contextualizing footage, speeding, or slowing. Thanks to social media, both kinds of AV manipulation can now be spread at unprecedented speeds.

How Your Brain Tricks You Into Believing Fake News. Media Bias/Fact Check - Search and Learn the Bias of News Media. Home - Fake News - LibGuides at University of Massachusetts Amherst. How false news can spread - Noah Tavlin. Internet Meme Database. How to tell if you’re talking to a bot. Twitter recently took drastic action as part of an effort to slow the spread of misinformation through its platform, shutting down more than two million automated accounts, or bots. 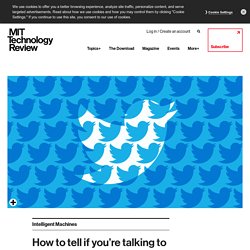 But Twitter shuttered only the most egregious, and obvious, offenders. You can expect the tricksters to up their game when it comes to disguising fake users as real ones. It’s important not to be swayed by fake accounts or waste your time arguing with them, and identifying bots in a Twitter thread has become a strange version of the Turing test. Accusing posters of being bots has even become an oddly satisfying way to insult their intelligence. Advances in machine learning hint at how bots could become more humanlike. But technology might also provide a solution. User profileThe most common way to tell if an account is fake is to check out the profile. Bot Sentinel Dashboard ‹ Bot Sentinel. Information disorder: The essential glossary. Trying to follow the national conversation about “fake news” and the spread of bad information online can be confusing because not everybody is using the same vocabulary. 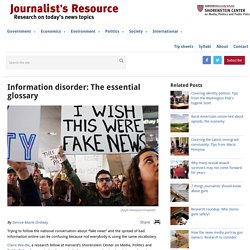 Claire Wardle, a research fellow at Harvard’s Shorenstein Center on Media, Politics and Public Policy, has created a glossary to help everyone understand certain words and phrases and how terms that may seem quite similar actually have very different meanings. For example, disinformation is false information meant to cause harm while misinformation is false information that might cause harm, although not deliberately. Below, we provide a copy of Wardle’s “Information Disorder: The Essential Glossary,” with her permission. How to use your phone to spot fake images surrounding the U.S.-Iran conflict. The definitive fact-checking site and reference source for urban legends, folklore, myths, rumors, and misinformation. 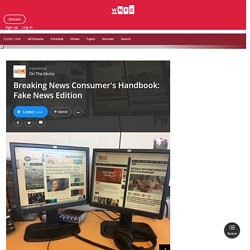 Melissa Zimdars, professor of communication and media at Merrimack College, has made a list of more than a hundred problematic news sites, along with tips for sorting out the truthful from the troublesome. She got into the fake news sorting racket after a hot tip. MELISSA ZIMDARS: Someone alerted me to the fact that when you searched for the popular vote on Google, the first Google news item that came up was a fake news website saying that Hillary Clinton lost the popular vote. Fact-checking U.S. politics.

How biased is your news source? You probably won’t agree with this chart. Are we even aware of our biases anymore? 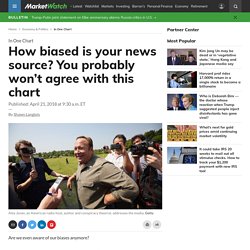 If you look at this chart and are convinced your “extreme” source belongs in the middle, you just might be part of the problem plaguing America today. “In the past, national evening news programs, local evening news programs, and the front pages of print newspapers were dominated by fact-reporting stories,” says the chart’s creator, patent attorney Vanessa Otero. “Now, however, many sources people consider to be ‘news sources’ are actually dominated by analysis and opinion pieces.” She released the first version of the chart back in 2016, and she’s updated it several times since.

Over the past year, it’s gone viral, with thousands of educators at both the high school and college levels using the compelling visual. Otero also talked about why such bias is so troubling. “I think the extremes are very toxic and damaging to the country,” she explained to MarketWatch. And with that, let the backlash over the latest version begin. A Guide to Fake News Websites. Satire is a venerable form of social commentary that uses humor to ridicule human vices and follies. 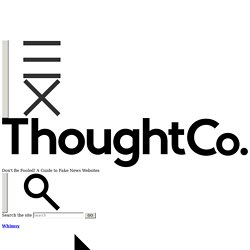 The Internet is rife with it, especially news satire, or fake news, in which fictionalized accounts of current events are presented in mock-journalistic style to lampoon politicians, celebrities, and social mores. Satire is only effective if people recognize it as such, however, and therein lies a major pitfall of publishing fake news on the Internet. Users tend to skim texts instead of reading them, missing important clues and disclaimers. The mechanics of social sharing obscure the origin and aim of viral content, increasing the likelihood that fiction will be mistaken for, or purposely misrepresented as, fact.

The (almost) complete history of 'fake news' Image copyright Alamy In record time, the phrase morphed from a description of a social media phenomenon into a journalistic cliche and an angry political slur. 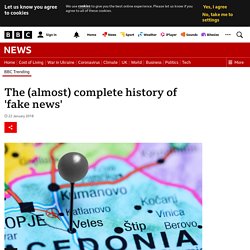 How did the term "fake news" evolve - and what's next in the world of disinformation? It was mid-2016, and Buzzfeed's media editor, Craig Silverman, noticed a funny stream of completely made-up stories that seemed to originate from one small Eastern European town. "We ended up finding a small cluster of news websites all registered in the same town in Macedonia called Veles," Silverman recalls. He and a colleague started to investigate, and shortly before the US election they identified at least 140 fake news websites which were pulling in huge numbers on Facebook.

The young people in Veles may or may not have had much interest in American politics, but because of the money to be made via Facebook advertising, they wanted their fiction to travel widely on social media. Fake News: Recommendations - Media Literacy Clearinghouse. If you read any news story about “fake news” in the past 18 months, you no doubt came across the phrase “media literacy.” 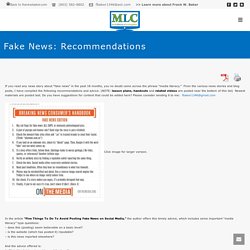 From the various news stories and blog posts, I have compiled the following recommendations and advice. (NOTE: lesson plans, handouts and related videos are posted near the bottom of this list) Newest materials are posted last. Do you have suggestions for content that could be added here? Please consider sending it to me: fbaker1346@gmail.com Click image for larger version. Hoaxy® by OSoMe. RationalWiki. Fake News - Resources from Harvard. Skip to main content Fake News, Misinformation, and Propaganda This page provides background information, links, and tools from outside organizations to help guide users in navigating potential fake news A Visual Take. 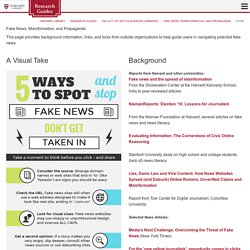 GO TenQuestionsForFakeNewsFINAL. Fake News Or Real? How To Self-Check The News And Get The Facts : All Tech Considered. Guido Rosa/Getty Images/Ikon Images Fake news stories can have real-life consequences. On Sunday, police said a man with a rifle who claimed to be "self-investigating" a baseless online conspiracy theory entered a Washington, D.C., pizzeria and fired the weapon inside the restaurant. So, yes, fake news is a big problem. OpenSecrets. FakeChecks.org. 10 Things You Can Do to Avoid Fraud. Consumer Information. The News Literacy Project. How To Spot Fake News. Critical thinking is a key skill in media and information literacy, and the mission of libraries is to educate and advocate its importance. Discussions about fake news has led to a new focus on media literacy more broadly, and the role of libraries and other education institutions in providing this.

When Oxford Dictionaries announced post-truth was Word of the Year 2016, we as librarians realise action is needed to educate and advocate for critical thinking – a crucial skill when navigating the information society. IFLA has made this infographic with eight simple steps (based on FactCheck.org’s 2016 article How to Spot Fake News) to discover the verifiability of a given news-piece in front of you. Download, print, translate, and share – at home, at your library, in your local community, and on social media networks. The more we crowdsource our wisdom, the wiser the world becomes. Factitious Test Yourself!

A List Of Fallacious Arguments. 15 Styles of Distorted Thinking. Dihydrogen Monoxide Research Division - dihydrogen monoxide info. Save The Pacific Northwest Tree Octopus. Help Save The ENDANGERED From EXTINCTION! The Pacific Northwest Tree Octopus Rare photo of the elusive tree octopus The Pacific Northwest tree octopus (Octopus paxarbolis) can be found in the temperate rainforests of the Olympic Peninsula on the west coast of North America. Their habitat lies on the Eastern side of the Olympic mountain range, adjacent to Hood Canal. An intelligent and inquisitive being (it has the largest brain-to-body ratio for any mollusk), the tree octopus explores its arboreal world by both touch and sight. Map of estimated tree octopus maximum range, including spawning waters Tree octopuses have eyesight comparable to humans.

The reproductive cycle of the tree octopus is still linked to its roots in the waters of the Puget Sound from where it is thought to have originated.