World UFO Day: Alien Girl and the Secret Apollo 20 Mission. You've probably heard about the Roswell landings and Area 51, but did you know about the top secret Apollo 20 mission, that was allegedly covered up by Nasa? 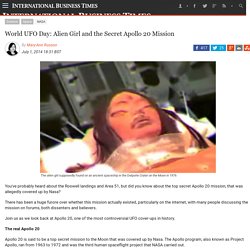 There has been a huge furore over whether this mission actually existed, particularly on the internet, with many people discussing the mission on forums, both dissenters and believers. Join us as we look back at Apollo 20, one of the most controversial UFO cover-ups in history. The real Apollo 20 Apollo 20 is said to be a top secret mission to the Moon that was covered up by Nasa. The Apollo program, also known as Project Apollo, ran from 1963 to 1972 and was the third human spaceflight project that NASA carried out.

Although the US government accomplished its goal to land men on the Moon and return them safely to Earth in 1969 with Apollo 11, further missions continued until 1972, with Apollo 17 being the last mission to go to the Moon and back. An astronaut on YouTube William Rutledge's account Real, or a hoax? UFO DOCUMENTARY :Aliens exist on the moon 2014 Full [ New UFO Sightings ] Jaime Maussan Presents the Smoking Gun. Megalithic Buildings with Energy Regulation. Megalithic Bildings with Energy Regulation by Miroslav Provod Construction of megalithic buildings with regulation of energy ensued probably from finding that restoring of health by means of menhirs, dolmens, cromlechs and clay mounds could have been exploited only in time intervals, whereon was need to wait sometimes for a long time. 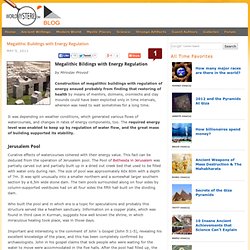 Lake Guatavita - Wikipedia, the free encyclopedia - Nightly. The Zipa used to cover his body in gold dust and, from his raft, he offered treasures to the Guatavita goddess in the middle of the sacred lake. 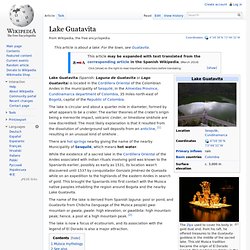 This old Muisca tradition became the origin of El Dorado legend. This model is on display in the Gold Museum, Bogotá, Colombia Votive objects found at the bottom of Lake Guatavita in the British Museum The lake is circular and about a quarter mile in diameter, formed by what appears to be a crater. The earlier theories of the crater's origin being a mereorite impact, volcanic cinder, or limestone sinkhole are now discredited. Battle of Los Angeles - Wikipedia, the free encyclopedia - Nightly. Russian Researcher Suggests Venera-13 Imaged Life on Venus. Russian renowned researcher Dr. 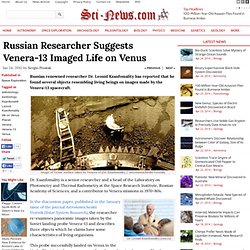 Leonid Ksanfomality has reported that he found several objects resembling living beings on images made by the Venera-13 spacecraft. Image of Venus’ surface taken by Venera-13 (Dr. Ksanfomality / Astronomicheskii Vestnik) Dr. Ksanfomality is a senior researcher and a head of the Laboratory on Photometry and Thermal Radiometry at the Space Research Institute, Russian Academy of Sciences, and a contributor to Venera missions in 1970-80s. Dr. CONTACTEES, ABDUCTEES, EXTRATERRESTRIALS, UFOS, SHELVED TECH. UFO encounters - official cockpit recordings - YouTube - Nightly. Petrozavodsk phenomenon. Fortean Bureau of Investigation. The Siberian taiga is a vast stretch of mainly barren coniferous forest as unspoiled and unexplored as the Amazon jungle, and more than 100,000 sq km in western Yakutia are completely uninhabited. 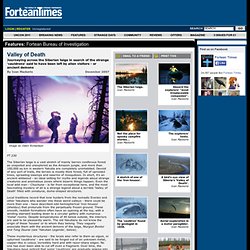 Devoid of any sort of trails, the terrain is mostly thick forest, full of uprooted trees, sprawling swamps and swarms of mosquitoes. In short, it's an ancient wildwood - an ideal setting for myths and legends about strange creatures and anomalous zones where bizarre things happen. Even the local wild man - Chuchuna - is far from exceptional here, and the most fascinating mystery of all is a strange legend about a terrible 'Valley of Death' filled with unnatural, dome-shaped structures. Local traditions record that lone hunters from the nomadic Evenks and other Yakutians who wander into these weird valleys - there could be more than one - have described odd hemispherical 'iron houses' (kheldyu) that proturude from the perpetually frozen ground. 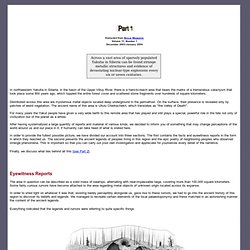 Mysteries of Siberia's "Valley of Death" - Part 4. Extracted from Nexus Magazine Volume 12, Number 3 April - May 2005 Indirectly pointing in the same direction is the chemical composition of the microspherules found in the peat at the disaster site. 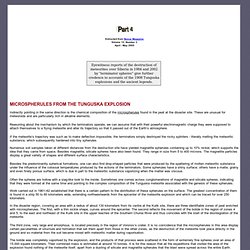 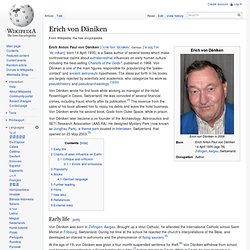 , published in 1968. Von Däniken is one of the main figures responsible for popularizing the "paleo-contact" and ancient astronauts hypotheses. The ideas put forth in his books are largely rejected by scientists and academics, who categorize his work as pseudohistory and pseudoarchaeology.[1][2][3] A closer look at the 'Cauldrons' in the Valley of Death Siberia. This weeks Ancient Aliens episode on Evil Places was highly interesting, particularly the feature on 'Cauldrons' in the Valley of Death, Yakutian Siberia. 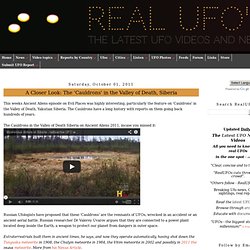 The Cauldrons have a long history with reports on them going back hundreds of years. The Cauldrons in the Valley of Death Siberia on Ancient Aliens 2011, incase you missed it: Russian Ufologists have proposed that these ‘Cauldrons’ are the remnants of UFOs, wrecked in an accident or an ancient aerial battle.

Russian researcher Dr Valerey Uvarov argues that they are connected to a power plant located deep inside the Earth, a weapon to protect our planet from dangers in outer space. Zecharia Sitchin. "Nibiru (hypothetical planet)" redirects here. 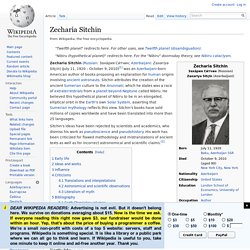 For the "Nibiru" doomsday theory, see Nibiru cataclysm. Zecharia Sitchin (Russian: Заха́рия Си́тчин; Azerbaijani: Zaxariya Sitçin) (July 11, 1920 – October 9, 2010)[1] was an Azerbaijani-born American author of books proposing an explanation for human origins involving ancient astronauts. Sitchin attributes the creation of the ancient Sumerian culture to the Anunnaki, which he states was a race of extraterrestrials from a planet beyond Neptune called Nibiru. He believed this hypothetical planet of Nibiru to be in an elongated, elliptical orbit in the Earth's own Solar System, asserting that Sumerian mythology reflects this view. Sitchin's books have sold millions of copies worldwide and have been translated into more than 25 languages. Sitchin's ideas have been rejected by scientists and academics, who dismiss his work as pseudoscience and pseudohistory.

Early life[edit] Ideas and works[edit] Nibiru cataclysm. V838 Mon, a star with an expanding light echo, purported as photographic evidence of Nibiru The Nibiru cataclysm is a supposed disastrous encounter between the Earth and a large planetary object (either a collision or a near-miss) which certain groups believe will take place in the early 21st century. Believers in this doomsday event usually refer to this object as Planet X or Nibiru. The idea that a planet-sized object will collide with or pass by Earth in the near future is not supported by any scientific evidence and has been rejected as pseudoscience by astronomers and planetary scientists.[1] The idea was first put forward in 1995 by Nancy Lieder,[2][3] founder of the website ZetaTalk. Lieder describes herself as a contactee with the ability to receive messages from extraterrestrials from the Zeta Reticuli star system through an implant in her brain.

Origins[edit] Goetia the Lesser Key of Solomon the King: Lemegeton, Book 1 Clavicula Salomonis Regis. The Goetia (pronounced Go-EY-sha) is Book 1 of the Lemegeton (Lesser Key of Solomon), a grimoire that circulated in the 17th century and is penned in the name of King Solomon. This translation/compilation comes from SL MacGregor Mathers in 1904. According to kabbalah scholar, Gershom Scholem, the text was not originally Jewish and was only translated into Hebrew in th 17th century.

Quran Contradiction: Solomon Working with the Jinn. Quran Contradiction The Quran’s Slander of Solomon: The Communion of Demons Muslims complain about the biblical portrayal of prophets and messengers being sinners, committing gross sinful acts, and view this as an indication that the Holy Bible has been corrupted. We have discussed these points elsewhere on our site, so we are not seeking to explain or defend the reason why the Holy Bible presents specific prophets in a negative light.

We, instead, want to use this criterion against the Quran and show that the Muslim scripture is guilty of slandering Allah’s messengers. This is basically a continuation of a series of articles on this subject that can be read here: Here, we want to examine the Quran’s claim that Solomon had demons working for him and under his authority. The Holy Bible says that demons know God is one: "You believe that God is one; you do well.