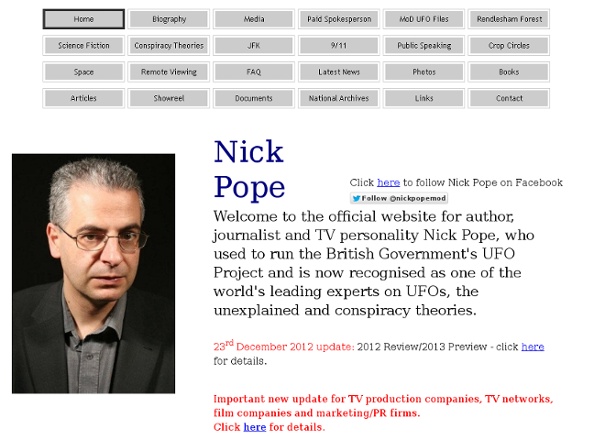 Linda Moulton Howe Shocking History of Human Alien Hybrids Royal Bloodlines Are Reptiles Transforming into Humans - A FORMER US marine has sensationally claimed that he has spent nearly a decade battling ALIENS on Mars. (Before It's News) This is a great talk from Linda Moulton Howe, as she talks about the secret history of hybrids on Earth, who came from the Sirius [B] star system by way of Mars. The Progenitors created a hybrid race, the Anunnaki which could not survive well on Earth, and had to be replaced with the Astro Albas, “tall whites” and their offspring, who now have much wealth and power, and maintain a distinctive DNA. They are still vulnerable to disease and excessive sunshine.

Alien Resources - Alien Agenda Alien Resources The Threat – Dr David Jacobs Among mainstream abduction researchers, David Jacobs is closer to the shores of Ithaca than most. Rather than see alien abductions as a wonderful or excusable phenomenon, Jacobs presents the conservative possibility that perhaps the grays don’t have mankind’s best interest in mind. He presents evidence that aliens are creating a race of hybrids to replace mankind, and that they want this planet for themselves. For veterans of the fringe, this is old news, and Jacobs’ rigid academic approach to researching abductions (to uphold his credibility) also limits the scope and depth of his analysis. Nevertheless, The Threat is an excellent introduction to the abduction phenomenon from a more mainstream perspective. Articles Since the beginning of my life on Earth I have experienced interactions with beings from various realms of reality beyond the earth, who have imparted new unified ways of perceiving existence as consciousness in human form and beyond. Read more: Cosmic Being - Tracey Taylor → Facing the Shadow, Embracing the Light: A Journey of Spirit Retrieval and Awakening - author Niara Terela Isley - is the story of one woman's induction into the world of extraterrestrials, flying saucers, shadow government operations and finally, her own transformation. Read more: Facing the Shadows, Embracing the Light → The following photo was taken on the south leg of our tour Crop Circles and Contact. It occured after a series of anomalous events, ie sighting of a UFO the night before and loud noises and voices in the night, when we were all in bed.

Mary Rodwell's Background ACERN offers professional counselling support, hypnotherapy and information to individuals and their families who have ‘anomalous’ paranormal experiences, particularly specializing in Abduction/contact experiences. Mary is recognised Internationally, as one of Australia’s leading researchers in the UFO and Contact phenomenon. She has lectured in the USA, Canada, Hawaii, UK and New Zealand. She appears regularly in national and international media news programs and in documentaries such as Australian Documentary ‘OZ Files” and the BBC television program, “the “Paranormal Files” (UK.) and Discovery Channel Animal X.

THE UFO BLACK LIST The sheer volume of noise and confusion in the field of UFOlogy is staggering. There are those attempting to suppress and obfuscate the truth, and even more simply attempting to profit from the tremendous interest by manufacturing hoaxes in order to make a profit. How do we reduce the noise? One thing we can do is identify those creating it, and refrain from encouraging them. Toward that purpose, this is the internet UFO Black List.

David Jacobs - Alien DNA And UFO Bloodlines - Dark Journalist Temple University Professor And UFO Author Dr. David Jacobs - July 31st, 2016 The Alien Human Hybid Program Alien Control Dark Journalist Daniel Liszt welcomes Temple University Professor and celebrated UFO Author Dr. Newly released files from The National Archives Skip to Main Content Home > UFOs UFOs UFO spotters say an 'alien city' is hidden beneath the Gulf of California Alien spotters have claimed a gigantic Atlantis-style alien city is hidden beneath the waters of the Gulf of California. UFO believers are currently sharing pictures from Google Maps which show a series of lines beneath the waves. Most people would just dismiss them as a natural formation, but the ever-excitable people of the alien-hunting online underworld have decided there’s something much more exciting going on.

John E. Mack Institute 16 Apr 2008 Stephen Coan, The Witness American film maker Randall Nickerson is currently visiting southern Africa to make a documentary that follows up an incident that happened at the Ariel School in Ruwa, Zimbabwe, in 1994, when 62 children aged between eight and 12 reported seeing a UFO and “strange beings” during their morning break. Those children are now young adults scattered around the globe. Nickerson is tracking them down and interviewing them about the experience. “Their stories have not changed at all,” he says. “Not what you would expect if they had made it all up.”

untitled A Canadian organization called Ufology Research recently released their annual UFO report, showing an increase in sightings in 2015 over the last couple of years, and the media has taken notice. Not only the major news outlets in Canada, but also the big ones here in the U.S. and the U.K. Chris Rutkowski, the head of Ufology Research, who has been inundated with interview requests, says he thinks it might be a case of news outlets looking for anything to cover other than the U.S. elections. Milton William Cooper Milton William "Bill" Cooper (May 6, 1943 – November 6, 2001) was an American conspiracy theorist, radio broadcaster, and author best known for his 1991 book Behold a Pale Horse, in which he warned of multiple global conspiracies, some involving extraterrestrial aliens.[1][2][3] Cooper also described HIV/AIDS as a man-made disease used to target blacks, Hispanics, and homosexuals, and that a cure was made before it was implemented.[4] He has been described as a "militia theoretician".[5] Early life Little is known about Cooper's background and education, beyond the information supplied in his own accounts. Behold a Pale Horse Cooper produced and published Behold a Pale Horse in 1991.[5] The book has been influential among "UFO and militia circles".[9] Just prior to the trial of Terry Nichols in 1997, The Guardian described it as "the manifesto of the militia movement".[10]

Exclusive Interview, Contact with Apunians Interview With Contactee Roberto Vargas De La Gala by Paola HarrisAugust 15, 2016 with the help of interpreter Giorgio Piacenza Roberto Vargas De La Gala: it would be fantastic I would love to meet you. Paola Harris: I have been doing this kind of work, doing this kind of research which is valid research on the Peruvian Contactees from the 1970’s. Excellent, good, in my case, in reference to myself.