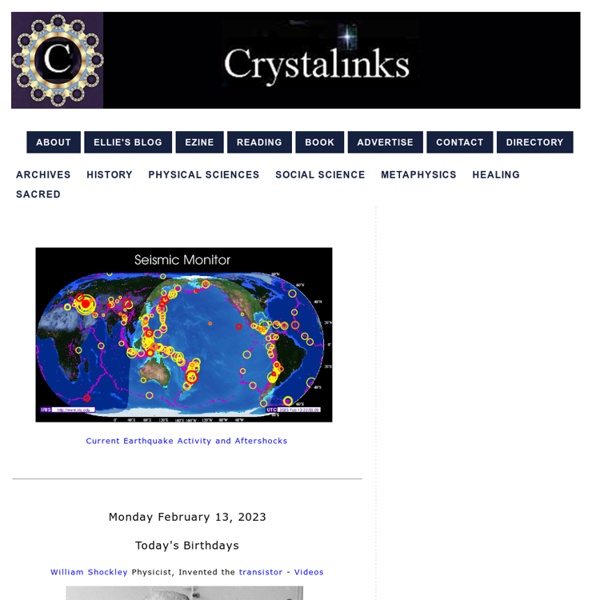 Current Moon Phase April 29, 2014 - New Moon Solar Eclipse (Annular) 8° Taurus Goldilocks Planets April 19, 2014 7:01 AM EDT A Goldilocks planet is a planet that falls within a star's habitable zone, and the name is often specifically used for planets close to the size of Earth. The first Earth-sized exoplanet orbiting within the habitable zone of another star has been confirmed by observations with both the W. M.

Ellie Crystal's Biography Ellie Crystal's Biography Reflections in Time View from Ellie's apartment in New York City Other images of the Verrazano Bridge A Biographical Portrait By Ian Christopher - Filmmaker and Producer Samkhya Samkhya, also Sankhya, Sāṃkhya, or Sāṅkhya (Sanskrit: सांख्य, IAST: sāṃkhya), is one of the six (astika) schools of Hindu philosophy and classical Indian philosophy. Sage Kapila is traditionally credited as a founder of the Samkhya school. It is regarded as one of the oldest philosophical systems in India.[1] Sāṃkhya denies the final cause of Ishvara (God).[5] Samkhya does not describe what happens after moksha and does not mention anything about Ishwara or God, because after liberation there is no essential distinction of individual and universal puruṣa. Historical development[edit] Origins[edit]

Blocking Unwanted Connections with a Hosts File What it does ... You can use a modified HOSTS file to block ads, banners, 3rd party Cookies, 3rd party page counters, web bugs, and even most hijackers and possibly unwanted programs. This is accomplished by blocking the connection(s) that supplies these little gems. The Hosts file is loaded into memory (cache) at startup, so there is no need to turn on, adjust or change any settings with the exception of the DNS Client service (see below).

Hexagram A hexagram (Greek) or sexagram (Latin) is a six-pointed geometric star figure with Schläfli symbol {6|2}, 2{3}, or {{3}}. It is the compound of two equilateral triangles . The intersection is a regular hexagon . It is used in historical, religious and cultural contexts, for example in Jewish identity , Hinduism , Occultism and Islam . Group theory [ edit ] In mathematics , the root system for the simple Lie group G 2 is in the form of a hexagram.

10 More Enigmas That Defy Explanation Mysteries What is it about the bizarre and mysterious that piques our curiosity? It entertains our sense of wonder and excites our imagination, for sure. Luckily for us, history is marked with strange, logic-defying occurrences to amuse us. Minoan civilization Map of Minoan Crete The Minoan civilization was an Aegean Bronze Age civilization that arose on the island of Crete and flourished from approximately the 27th century BC to the 15th century BC.[1] It was rediscovered at the beginning of the 20th century through the work of British archaeologist Arthur Evans. Will Durant referred to it as "the first link in the European chain. Creation Science Big Bang Theory Cosmology Evolution Large Hadron Collider Out of Africa Paleontology Panspermia and Exogenesis Physical Sciences Precession of the Equinoxes Primordial Soup Theory Mathematics 12 Around 1 Geometry Sacred Geometry Fibonacci Numbers Tube Torus Flower of Life Golden Ratio, Golden Mean, Divine Proportion, Phi Metatron's Cube Vesica Piscis Fractals Chaos Theories Reality as a Consciousness Hologram Consciousness Ellie's Theories Holographic Universe Reality

Serpent (symbolism) The serpent, or snake, is one of the oldest and most widespread mythological symbols. The word is derived from Latin serpens, a crawling animal or snake. Snakes have been associated with some of the oldest rituals known to humankind[1] and represent dual expression[2] of good and evil.[3] List of common misconceptions From Wikipedia, the free encyclopedia This incomplete list is not intended to be exhaustive. This list corrects erroneous beliefs that are currently widely held about notable topics. Each misconception and the corresponding facts have been discussed in published literature. Mary, Queen of Scots Mary, Queen of Scots (7/8 December 1542 – 8 February 1587), also known as Mary Stuart[3] or Mary I of Scotland, was queen regnant of Scotland from 14 December 1542 to 24 July 1567 and queen consort of France from 10 July 1559 to 5 December 1560. Mary, the only surviving legitimate child of King James V of Scotland, was 6 days old when her father died and she acceded to the throne. She spent most of her childhood in France while Scotland was ruled by regents, and in 1558, she married the Dauphin of France, Francis.

Bodhicitta Etymology[edit] Etymologically, the word is a combination of the Sanskrit words bodhi and citta. Bodhi means "awakening" or "enlightenment". Citta derives from the Sanskrit root cit, and means "that which is conscious" (i.e., mind or consciousness).

85 Windows 7 tips, tricks and secrets Whether you've just bought a second-hand PC running Windows 7 or you've been using it for a while, there are bound to be things you didn't know you could do. Whether it's tweaks to get the desktop the way you want it, tips for troubleshooting or ways to squeeze more performance from Windows 7, we've got it covered. Windows 7: the complete guide We've updated our popular Windows 7 tips article with a load of new ones, including how to recover and reset your system, how to tweak your screen resolution and the legibility of text, play music on a network of PCs, and more. Read on for over 90 tips to help you get the best from Windows 7.